The species is native to the Dominican Republic (Barahona Peninsula and, in front, the Beata Island) where it grows in the dry open forest on poor calcareous soils, at low altitudes.

The name of the genus is the combination of the Greek prefix “ψευδο-“ (pseudo-) = fake and of the genus Phoenix, due to the supposed resemblance between the two genera; the species is honored to the Swedish botanist Leonard Ekman (1883-1931).

The Pseudophoenix ekmanii Burret (1929) is a solitary, monoecious, unarmed species, with erect stem 5-6 m tall and of about 20 cm of diameter at the base, growing gradually up to 60-80 cm towards the apex then to narrow abruptly to about 15 cm under the foliage, of grey colour and covered by a thick layer of white wax in the youngest part on which stand out the rings trace of the fallen leaves. 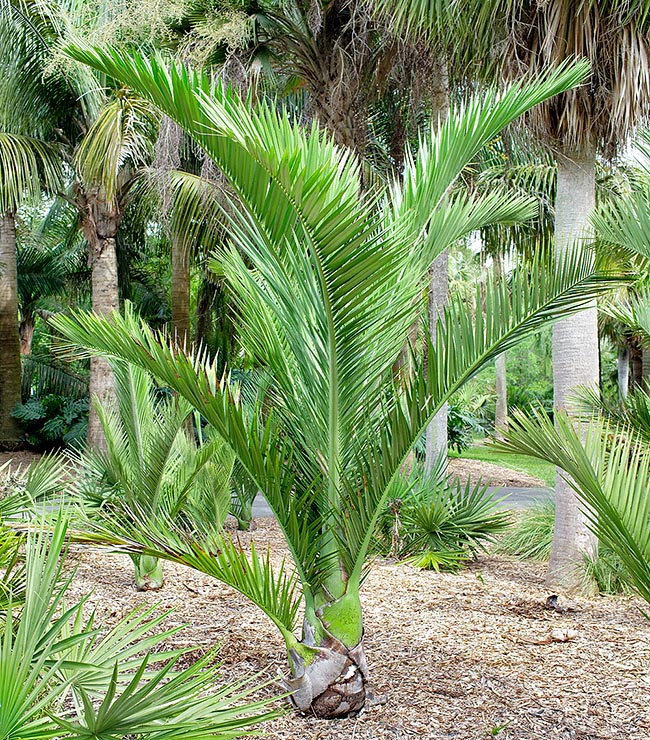 The Pseudophoenix ekmanii of Dominican Republic is a species at extremely high risk of extinction in nature because of the local collection of the tasty sugary sap, used for the mabí de cacheo and an alcoholic drink © Giuseppe Mazza

Sessile pinnate leaves, ascending and distichous in the young plants, curved and spirally arranged in the adult ones, up to about 2,5 m long, with linear-lanceolate leaflets with acuminate apex, rigid, arranged more or less regularly along the rachis on more levels; in the median part up to about 40 cm long and 2 cm broad, of green grey colour and covered by a waxy glaucous patina. The foliar base, open obliquely, wholly wraps the stem only for a few centimetres. Inflorescences between the leaves (interfoliar), up to 1,5 m long, with ramifications of third order, hermaphroditic flowers spirally arranged singly on the rachillae, but in the terminal part where are present few male flowers, with trilobate calyx, 3 petals, 6 stamens and trilocular gynaeceum and short sessile stigmas. Globose fruits, of about 1,3 cm of diameter, or bi- or triglobose, of reddish colour, waxy, containing 1-3 globose seeds of about 1 cm of diameter.

It reproduces by seed, previously kept in water for 3 days, in sandy loam maintained slightly humid at the temperature of 26-28 °C, with germination times starting from 3-4 months.

Considered as the most ornamental of the genus, due to the particular shape of the stems and the belts of white wax in the youngest part spaced by the brown foliar scars, but little cultivated probably due to the slow growth. Cultivable in the tropical and subtropical climate regions, its cultivation may be tried in sheltered position in the mildest warm temperate ones, where temperatures around the 0 °C are short lasting exceptions. It requires full sun and draining soils, preferably calcareous, resists drought, saltiness and the strong winds, hence can be employed in desert type gardens, together with cacti and other xerophytic plants, even close to the sea.

From the sugary sap collected by cutting a rectangular portion of the stem in the swollen zone they obtain a sweet drink (mabí de cacheo) and by fermentation an alcoholic beverage very appreciated by the local populations, practice that often leads to the death of the plant and that has reduced drastically the number of specimens threatening its survival.

Owing to the restricted origin area, the reduced number of specimens and the collection of the sap, the species has been inserted into the red list of the IUCN (International Union for the Conservation of Nature and Natural Resources) as “Critically Endangered” (with extremely high risk of extinction in nature in the very next future).