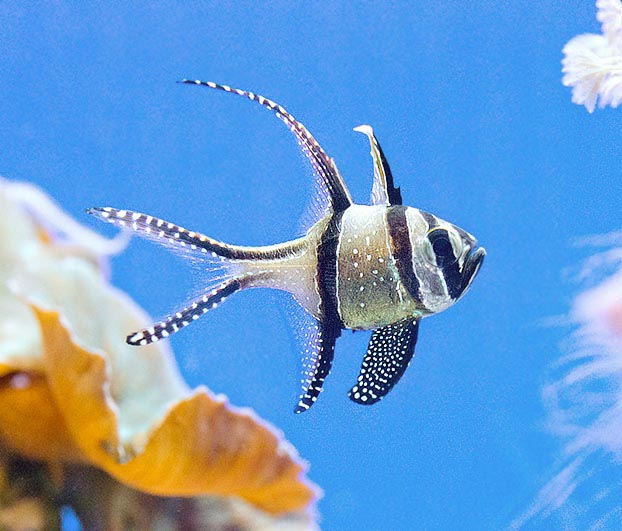 The Banggai cardinal fish or Kaudern’s cardinalfish (Pterapogon kauderni Koumans, 1933) belongs to the class of Actinopterygii, the ray-finned fishes, to the order of the Perciformes and to the family of the Apogonidae, rich of more than 200 species at home in the tropical seas with some exception like the Mediterranean Apogon imberbis or the species belonging to the genus Glossamia, freshwater fishes.

The etymology of the genus comes from the Greek “pteron” = wing and from the well known genus Apogon. It is, therefore, a “winged Apogon” with reference to the long fins.

The name of the species honours the memory of the Swedish scientist Walter A. Kaudern (1881-1942), director of the Goteborg Ethnographic Museum, who, during an expedition in Indonesia, did collect along the Banggai islands coasts two specimens of this fish.

It is endemic to the Banggai islands in Indonesia: rare example of sea fish with an extremely limited geographic distribution.

It lives in calm, very shallow waters, between the 0,5 and 6 m of depth, even if usually it stands in the 2 m belt. It prefers the madreporic formations, but in the 30% of the cases it lives in the underwater prairies of sea phanerogams such as the Enhalus acoroides and can be at home also on the sandy bottoms, in the mangrove formations and in the harbours. 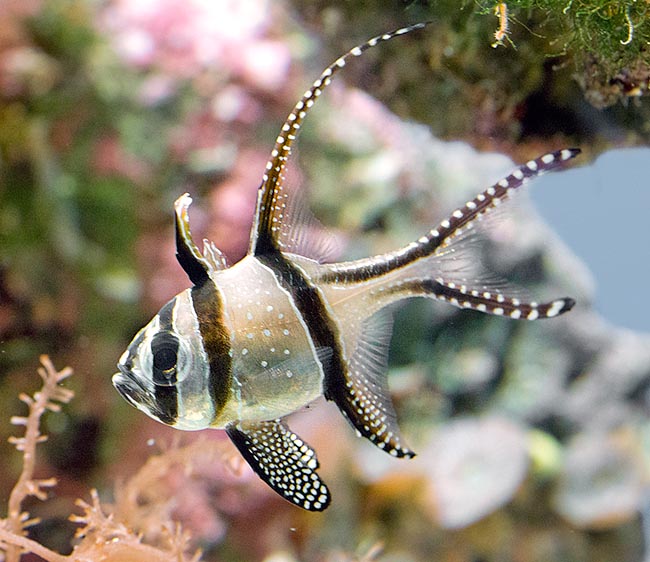 Victim of the foolish fishing for the aquaria market, it's an endangered species © Giuseppe Mazza

The jaw opens downwards and the males’ zone under the chin is extensible in order to protect the eggs and the young.

The Banggai cardinal fish lives in small schools which, unlike the other Apogonidae, are active during the day. They manly hunt crustaceans and small planktonic fishes. At the least danger sign, they take shelter among the very long spines of the tropical sea urchins, such as the Diadema setosum, the intricate branches of madrepores of the genera Acropora, Anacropora and Goniopora, or among the spiny bifurcations of the Echinopora horrida, of the Heliofungia actiniformis, of the Montipora digitata and of the Seriotopora hystrix. Like the Amphiprion, the juveniles often find shelter among the urticant tentacles of actinias of the genus Actinodendron not to talk of the Entacmaea quadricolor, of the Heteractis crispa, of the Macrodactyla doreensis or of the Stichodactyla haddoni.

During the reproductive period, couples take form, jealous of a small territory. The marriages take place usually n the afternoon preceding the full moon. The female, after a brief courting, makes the male to understand that the moment of acting has come and emits about 40-75 eggs of 2,5-3 mm. Half of them gets lost or is not fecundated, but the others hatch safely in the mouth of the spouse after three weeks of incubation. The young are still kept in the mouth for 10 days, until they have consumed the yolk and measure 5-6 mm. The moment has come for releasing them in a safe location, for instance, among the spines of a sea urchin.

The Pterapogon kauderni reproduces also in captivity, but seen that it is easy to fish it and the plan transportation is not expensive due to its modest size, the reefs are wildly emptied and are deteriorated for the aquaria trade. In the protected areas the populations can double in 1,4-4,4 years, but usually the members are in clear decline and seen that it is an endemic species, the biologists of the Red List have rightly placed it amongst the endangered species.

The vulnerability index of this species is of 36 over 100.