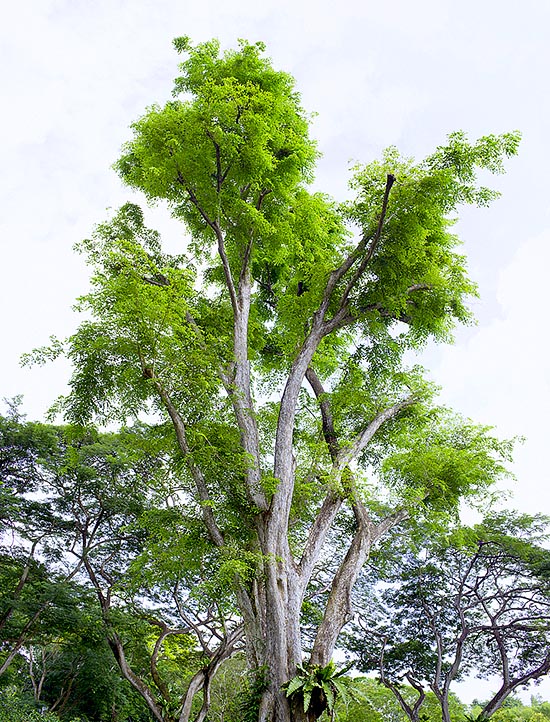 At home in South-East Asia, Pterocarpus indicus can be 30 m tall. The excellent brown red wood, easy to work and resistant to the termites, has rendered it endangered in nature. Luckily it grows fast but the giants of the past with huge tabular roots are nowadays rare © G. Mazza

The species is native to Brunei, Cambodia, China (Guangdong and Yunnan), Indonesia, Japan (Nansei-Shoto Islands), Malaysia, Micronesia, Myanmar, Palau, Papua New Guinea, Philippines, Solomon Islands, Taiwan, Thailand, Vanuatu and Vietnam where it grows in the forests, often close to the water streams, from the sea level up to about 1300 m of altitude.

The generic name is the combination of the Greek substantives “πτερόν” (pteron) = wing and “καρπός” (carpos) = fruit, with reference to the winged fruits; the specific name is the Latin adjective “indicus, a, um” = of India, in the ampler sense of ‘East Indies’.

The Pterocarpus indicus Willd. (1802) is an evergreen or briefly deciduous tree, up to about 30 m tall, with ample and dense foliage and initially ascending branches, then arcuate and possibly drooping. The trunk is erect, up to 2 m of diameter, provided at the base of tabular roots (flattened roots similar to buttresses that concur in the support of great trees), with greyish bark, that in the old specimens tends to flake off in longitudinal stripes, from whose wounds exudes a reddish resin; the rooting apparatus is able to fix the atmospheric nitrogen thus enriching the soil.

Axillar inflorescences, rarely terminal, racemose or panicle, 10-18 cm long, bearing numerous fragrant hermaphroditic flowers, on a 0,8-1 cm long pedicel, with green campanulate calyx, 0,5 cm long, and papilionaceous corolla, about 1,6 cm long, of yellow or orange yellow colour, with ovate-oblong vexillum and oblong wings with wavy margins, keel smaller than the wings and 10 stamina, 9 of which with merged filaments and one free (diadelphous stamina). The fruit is a flat urbicular indehiscent legume, of 5-7 cm of diameter, winged along the margins, initially pale green, then brown when ripe, containing 1-2 reniform seeds, 1-2 cm long, of brown colour; the fruits are mainly dispersed by the wind and in lesser extent by the water, being able to float, for the coastal populations. It reproduces by seed, in draining organic loam maintained constantly humid at the temperature of 25-28 °C, with germination times of 1-12 weeks and first blooming after 5-7 years, and by cutting even woody, branches up to 6 cm of diameter rooting easily and beginning to bloom after 2-3 years. 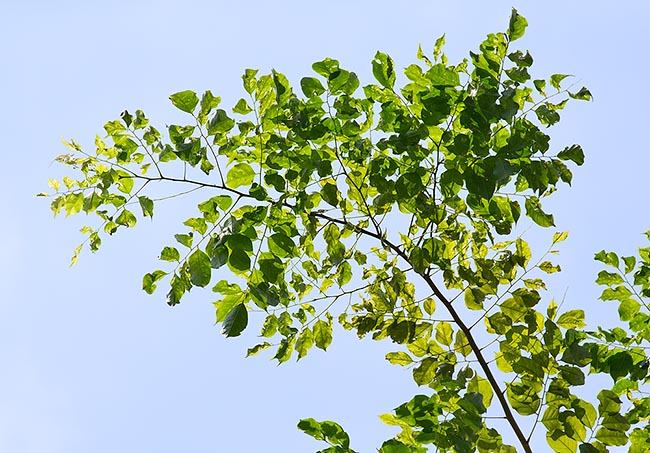 The ample nicely bright green drooping leaves make it an ornamental plant for the tropical gardens. Since centuries, it is used in the medicine for various pathologies. Laboratory studies have recently shown the presence in roots, bark and leaves of bioactive compounds with antibacterian virtues © Giuseppe Mazza

Fast growing tree cultivable in the tropical and subtropical climate zones, not bearing temperatures of just less than 6-8 °C if not exceptional and for a very short period, where is often utilized in parks and very wide gardens or as road tree, due to the ornamental foliage and the brilliant blooming, but its placement is to be carefully studied because of the wide superficial rooting apparatus. It requires an exposition in full sun, or at the most, a slight shade, and adapts to a vast variety of soils, but grows best in the deep ones, draining and fertile, slightly acidic to slightly alkaline.

The brown red wood, has excellent characteristics of hardness, duration, ease of processing and resistance to the termites, and is highly appreciated and utilized in many of its origin countries for prized furniture, panellings, floors, musical instruments and artistic objects.

Due to the overexploitation, even illegal, its presence in many of its origin areas has rarefied so much to be inserted, as “vulnerable” (species at extinction risk in nature), in the red list of the IUCN (International Union for the Conservation of Nature). It is also employed in the programmes of reforestation and of stabilization of the soils, and for its resistance also as wind barrier. All parts of the plant are variously utilized in the traditional medicine for various pathologies; laboratory studies have evidenced the presence in the roots, bark and leaves of bioactive compounds with antibacterian activity. The species is the national tree of the Philipppines and is the floral emblem of Myanmar.