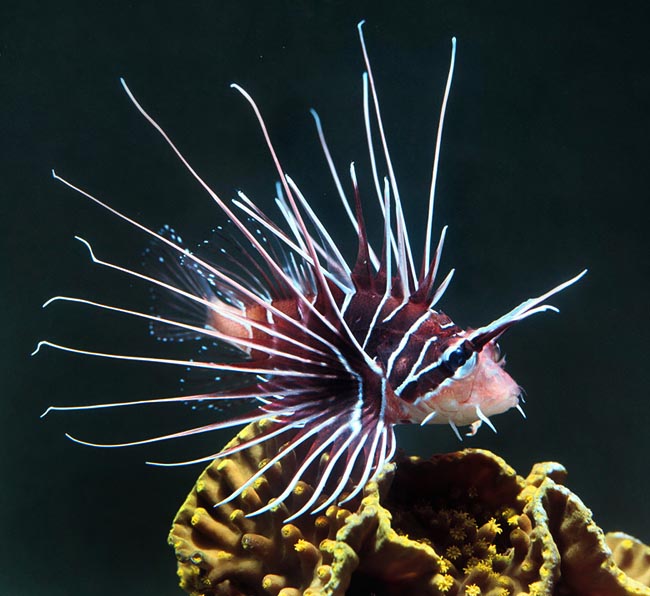 Pterois radiata is quite rare, with very vast diffusion in the Indo-Pacific © Giuseppe Mazza

The Radial firefish (Pterois radiata Cuvier, 1829) belongs to the class of Actinopterygii, the ray-finned fishes, to the order of Scorpaeniformes and to the family of Scorpaenidae.

The name of the genus comes from the Greek “pteron” = wing, feather, with reference to the fins, similar to feathers.

The name of the species comes from the Latin “radiatus” = equipped with rays, with reference to the pyrotechnical filiform fins.

The Italian name of “cobra” reminds us, on the contrary, the powerful poison present in the spiny rays of the fins.

It is an uncommon species, but with a vast diffusion in the tropical waters of the Indian and Pacific oceans. We find it, indicatively, along the whole African coast, from South Africa to the Red Sea and the Gulf of Aden, at the Seychelles, Mauritius and Maldives Islands, in India, Sri Lanka, Christmas Island, Australia, Indonesia, Micronesia, New Guinea, New Caledonia, Philippines, Taiwan and in the Ryukyu Islands in southern Japan. Southwards, it reaches New Caledonia, eastwards, the Tonga, Samoa, Kiribati, Tahiti and Hawaii Islands.

The radial firefish goes down up to about 30 m of depth, preferring to the madreporic formations the rocks rich of crevices where it rests, before the night hunting, often hidden head down. 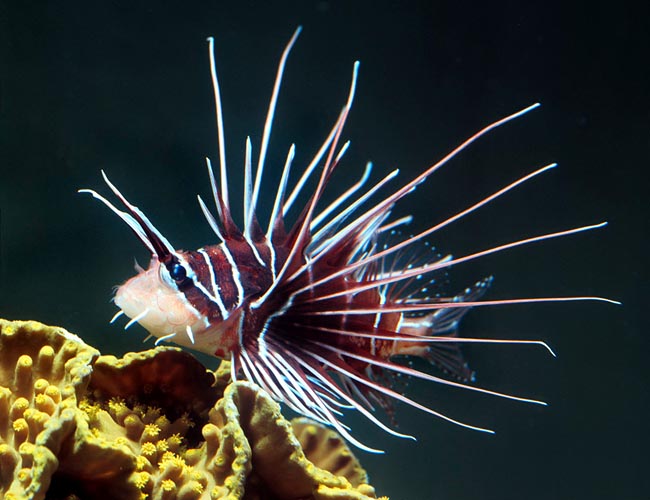 The head is light-coloured and over the eyes, hidden by a dark belt, stand out two protuberances, elongated also them like rays, whilst the livery is striped, and with thin white vertical stripes separating big brown reddish zones. Unique case in the world of the Pterois are present also two horizontal lines, white too, on the caudal peduncle.

For hunting, this species does not utilize the poison, which is kept as a defence weapon, but it surprises the preys with the rays opened like a fan which hinder the escape and sucks up them thanks to its enormous protractile mouth, holding them with the tiny teeth.

On the contrary, the spines are used when it is attacked, often in extremis, into the mouth of the predators which hasten to spit it out.

The bites, apart the pain, cause in the man nausea, vomiting, dizziness, fainting, difficulty in breathing, drop in blood pressure, seizures and in some instances also heart failure.

It is matter, as is the case for the Pterois volitans, of a toxin which is thermolabile at 50-60 °C and as first aid, when possible, it is suggested to immerse the affected part in warm water.

The radial firefish nourishes mainly of crabs and shrimps. It is a solitary species which reaches, in aquarium, the 10 years of life. Not much is known about its reproduction, apart the fact the fecundated eggs originate pelagic larvae dispersed by the currents.

Seen the modest size, unlike the Pterois volitans it is not fished for alimentary purposes and the populations decimated by the events double more rapidly, in only 1,4-4,4 years. Ironically, therefore, even if rare, it has a lower vulnerability index, of 36 on a scale of 100, against the 57 on 100 of the other species.