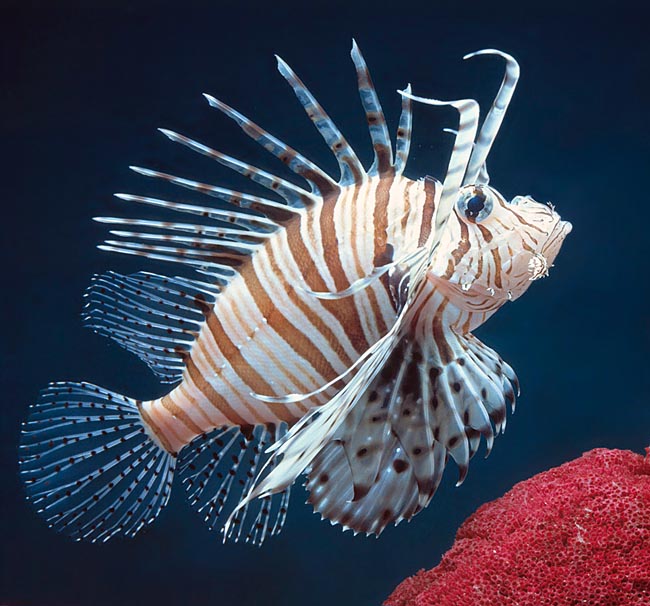 The Red lionfish (Pterois volitans Linnaeus, 1758) belongs to the class of Actinopterygii, the ray-finned fishes, to the order of the Scorpaeniformes and to the family of Scorpaenidae.

The name of the genus comes from the Greek “pteron” = wing, feather, with reference to the splendid fins, resembling to feathers.

The name of the species “volitans” means in Latin flying, due to its majestic and whirling way to move.

The Italian names of “pesce scorpione” and “pesce cobra” (scorpion fish and cobra fish) refer to the strong venom present in the spiny rays of the fins.

It is at home in the eastern Indian Ocean and in the Pacific Ocean.

But nowadays its distribution does not stop here, because it has been introduced by the man in Florida following to the breakage of an aquarium, in August 1992, consequent to the damages caused by the hurricane Andrei, or, maybe by some thoughtless person who has freed them into the sea.

What is sure is that in 1995 it was present off Dania Beach in Florida, in 2000 t had reached the Carolina and the Bermudas, in 2004 the Bahamas, then in 2007 Cuba and in 2008 the Cayman Islands, the island of Hispaniola, Jamaica, Puerto Rico, and Colombia, in 2009 Mexico, Panama, Costa Rica and Venezuela: in short, the whole Gulf of Mexico. And the colonization goes on thanks to the currents transporting the planktonic larvae. 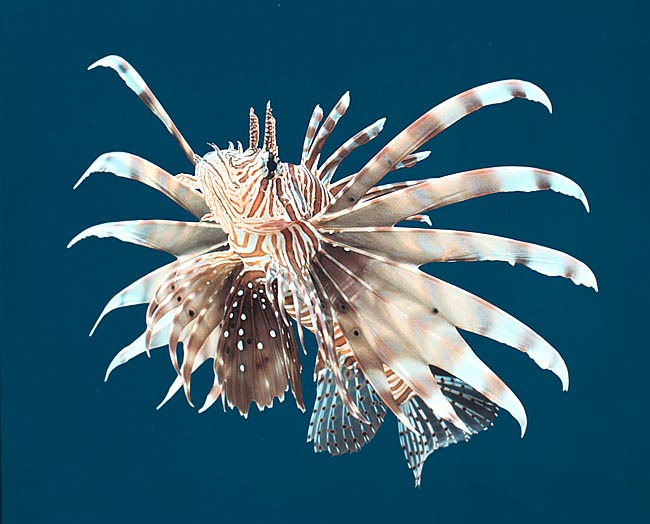 The red lionfish lives in the madreporic formations up to about 50 m of depths, especially where the reef is rich of caches, but also in the rocky locations and in the harbours. It does not love the currents, as prefers the calm waters where it can whirl without any effort. It chooses a den and then is a calm and territorial animal, aggressive only towards the intruders of other species.

It can reach the 38 cm. Fins apart, it is a close relative to our Mediterranean scorpionfishes and, like these ones; the body is fusiform with big head. The colouration is changeable depending on the zone: usually it has a pale livery with reddish vertical bands and spots, but the populations living along the rocky coasts and the estuaries may be almost black.

Also the shape of the showy pectoral fins may slightly change, but almost always two big tentacles over the eyes can be seen.

For hunting, they do not use the venom, which remains a defensive weapon, but opening wide the enormous mouth they aspirate the prey, which is then held by tiny teeth. When they feel menaced, if they cannot go away, they attack violently the intruders, also the skin-divers, with the dorsal poisonous rays spread; these remain active even after the death of the fish. 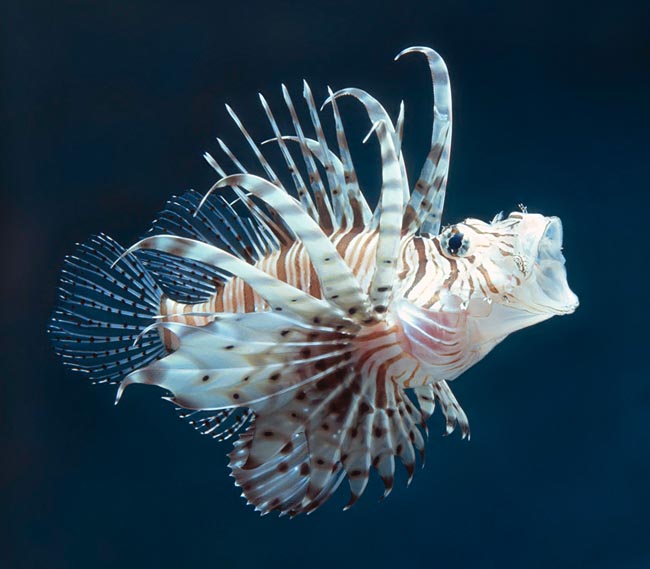 The poisonings, apart the intense pain and swellings or local necroses with loss of sensitivity, breathing difficulty, fall in blood pressure, convulsions and even heart failure. As a matter of fact, unluckily, also fatal cases are reported.

The composition of the venom is little known. It is only known that the toxin is thermolabile at 50-60 °C and resists perfectly well to the freezing.

The adult red lionfish is a greedy nocturnal predator which devours about 50 species of different fishes, whilst the young eat small invertebrates, mostly worms and crustaceans.

The males achieve their sexual maturity around the 10 cm; the females around the 18 cm, because they must spawn, little by little, every 4 days, a total of about 30.000 eggs, wrapped by mucus.

Immediately fecundated by the male, the eggs go up and float on the surface. After 2 days, the mucus dissolves and the larvae get out, abandoned to the currents. They will take 25-40 days for transforming in small swimming fishes of about 1 cm.

Apart the aquaria trade, the flesh of the red lionfish is excellent and so it often ends up in the dishes of the local restaurants. This, considering the fact the populations take 4,5-14 years for doubling, means that the vulnerability of the species is relatively high, 34 per 100, in sharp contrast with its rapid diffusion in the Caribbean. Accurate and extensive studies are underway.