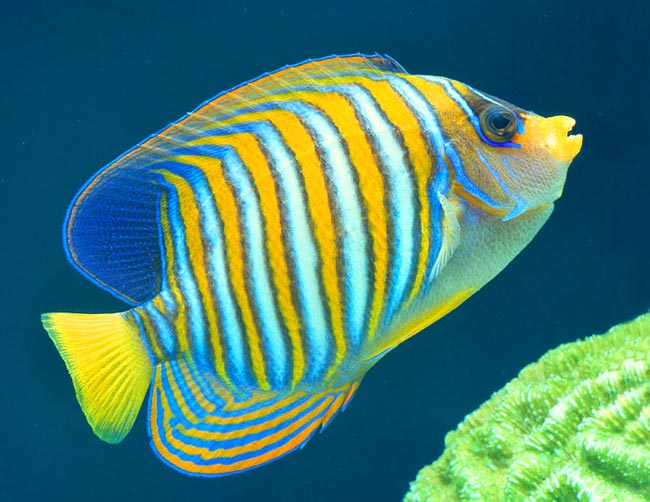 Pygloptes diacanthus is one of the most colourful angelfishes © Giuseppe Mazza

The Regal angelfish (Pygoplites diacanthus Boddaert, 1772), belongs to the class of the Actinopterygii, the ray-finned fishes, to the order of Perciformes and to the family of Pomacanthidae, which counts 9 genera and 74 species.

The etymology of the name “pygoplites” comes from the Greek “pyg” = rear and “hoplites” = hoplite, the name of the strongly armed soldiers of the Greek heavy infantry.

The name “diacanthus” comes always from the Greek “dia-” = by means of, and “akantha” = spine.

It is matter, therefore, of a “well armed fish by means of a spine bent backwards” with reference to the spiny operculum typical of the family.

It is present in the tropical waters of the Indo-Pacific. Indicatively, we find it from East Africa and Madagascar up to the Seychelles and the Red Sea, to the Maldives, Sri Lanka, in Thailand, Malaysia, Indonesia, New Guinea, Australia, Micronesia, Philippines, Taiwan and China up to the southern part of Japan with the Ryukyu and Ogasawara Islands. South-eastwards, it reaches the New Caledonia, Vanuatu, the Fiji Islands, Tonga, Tahiti and Tuamotu.

It lives among the madrepores and the corals in shallow waters, usually not under the 50 m of depth. They love the corals of the genus Acropora which protect them upward with their spikes and welcome them under their flat structure rich of hiding places. 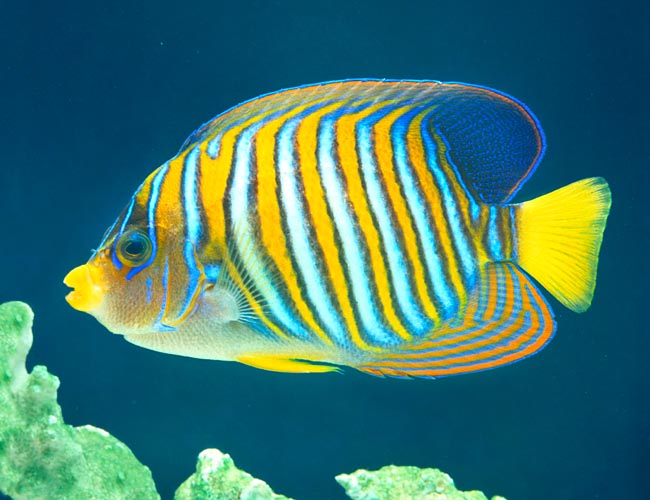 The first counts 14 spiny rays and 17-18 soft; the second 3 spines and 17-19 unarmed rays. The pectoral fins have 16-17 soft rays and the ventral ones, spineless, are long and pointed. The caudal fin is more or less truncated.

The juvenile livery is very different. At first glance, it might be mistaken with a Chaetodon, as some synonyms indicate, with a false enormous eye at the base of the dorsal fin. The white vertical bands which gradually appear stand on a yellow background in the populations of the Pacific Ocean and orange for those of the Indian Ocean.

The regal angelfish often lives alone, but also in pairs or small schools nourishing manly of sponges and ascidians. The eggs are pelagic and the young are practically invisible because they carry on a life hidden amongst the corals. Luckily for them, it is not easy to fish them and seen that nobody catches the adults, because they do not adapt to the aquarium life, and quickly die miserably, it is a species little present in the aquaria market.

In nature, the populations can double in 1,4-4,4 years and in spite of its beauty, the species has presently a moderate vulnerability index: 38 on a scale of 100.