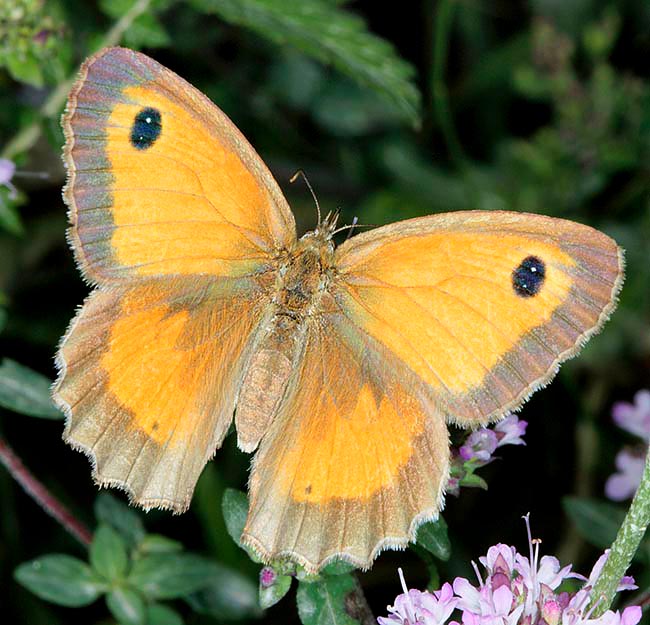 A female of Pyronia tithonus in the typical resting position, with open wings © Giuseppe Mazza

The Gatekeeper (Pyronia tithonus Linnaeus, 1767) belongs to the order of the Lepidoptera, to the family of the Nymphalidae and to the subfamily of the Satirynae , a large grouping of butterflies that in England is commonly called the “browns”, seen their dominant colour.

It is a locally common butterfly and particularly diffused when the bramble in bloom is present, as this attracts it irresistibly.

It is rather tardive and flies only in full summer, sharing the grassy meadows with species of the genera Erebia, Coenonympha and in particular the Maniola jurtina to which it resembles a lot.

In any case it is easy to distinguish among the “browns” as, more than in the others, it shows on the wings a quite visible orange colour.

As often is the case, the etymology of the scientific binomen gets its origin from a bad interpretation of a Greek term or even from a wrong transcription of the same. Pyronia from the Greek “puronia” means to buy some corn whilst the closest term “puropos” = flaming or burning eye, rightly describes the large ocellus inserted in the orange wing of this butterfly. It is therefore probable that Hubner, the classifier of this genus, has inadvertently done this error of transcription.

Conversely, the species tithonus recalls Tithonus, a Trojan young man, brother of the future king of Troy, Priam, kidnapped when still a child and then loved by Eos, the goddess of the dawn. Unable to live without him, she asked Zeus to grant him the immortality, forgetting however to ask for his beloved the eternal youth. The poor Tithonus therefore aged inexorably, so much that Eos, moved to pity, obtained then for him to be transformed in a cicada.

The European common names of this butterfly are inspired by its colouration. Rotbraune Ochsenauge or Braungerändertes Ochsenauge or Gelbes Ochsenauge, in German; oranje Zandoogie, in Dutch; Gatekeeper or Hedge Brown, in English; Amaryllis, in French; Lobito agreste, in Spanish.

The gatekeeper is present in Central and South Europe up to Morocco but is absent in the insular part of Italy and in many Mediterranean islands. It is found also in the south of the UK and in southern Ireland but its intolerance of the cool humid climates does so that often there are years where the populations are much reduced. It is present in Turkey up to Caucasus with sparse colonies in the Near East. It is never present in large number but is regularly diffused in its range. 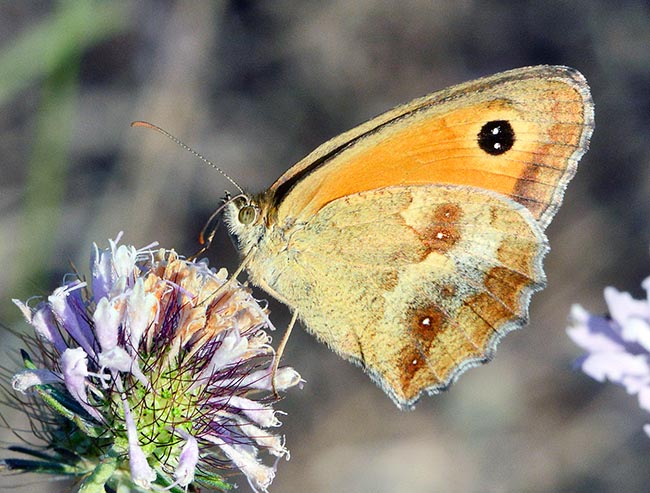 Still a female from a side view. The lower page of the fore wing resumes the same colours or signals. The back of the posterior one is streaked in both sexes with various brown edged ocelli in the females © Gianfranco Colombo

It does not love high altitudes, preferring by far plain meadows at the foot of hills or on the margin of lowland woods. The preferred habitat is the same frequented by the Erebia, by the Maniola and by the Coenonympha, therefore, grassy and uncultivated meadows, margins of woods, hedges, paths and roadsides, and is unfailingly patrolling when, as said before, there is a bramble bush in bloom. It does not perform long-haul travels and is therefore traditionally linked to the location where it is born.

It is not much visible as has a fairly low flight done jumping at low altitude among the stems of the grass under the line of visibility. Moreover, it immediately stops when the sun disappears, preferring staying on the ground hidden among the grass instead of hanging on the stems. This usual behaviour it has, causes since the first days damages to the alar surfaces which are undamaged only in those of the fresh fly off.

The gatekeeper has a wingspan of about 40 mm in the female and little less in the male. Among the “browns”, is that having the greatest quantity of orange on the wings, in the male as well as in the female. It is unmistakable on the field, even if leaving together with a good number of rather similar species, due to its vivid colour it exhibits when resting. As a matter of fact, among these similars is the one who, more than any other keeps usually the wings completely open.

Very easy to approach, it is then also of simple identification. There are many chromatic variations in this butterfly but usually both sexes have the upper face of the wings of orange colour edged by a brown band surrounding both wings. The male shows on the fore wings the sexual mark with a dark brown transversal band crossing almost completely the wing and in the apex a black ocellus with white pupil. Moreover, it has on the lower wings two to three small ocelli, almost invisible at times, and a rather dark basal area. The female retraces on the upper surface of the wings the same colours as the male, without, of course, the androconial mark. It has a big black ocellus at the apex, usually with two white pupils, lined to other two much reduced spots without any evident black edging. The lower wing shows in the post-discal area two or more ocelli edged in black with white pupil.

The lower page of the fore wings reflects the same colours and signals of the upper one whilst the lower wing is, for both sexes, streaked by yellowish hues more evident in the female, among which appears a variable series of small dark brown edged ocelli. The antennae are robust and clavate at the apex. 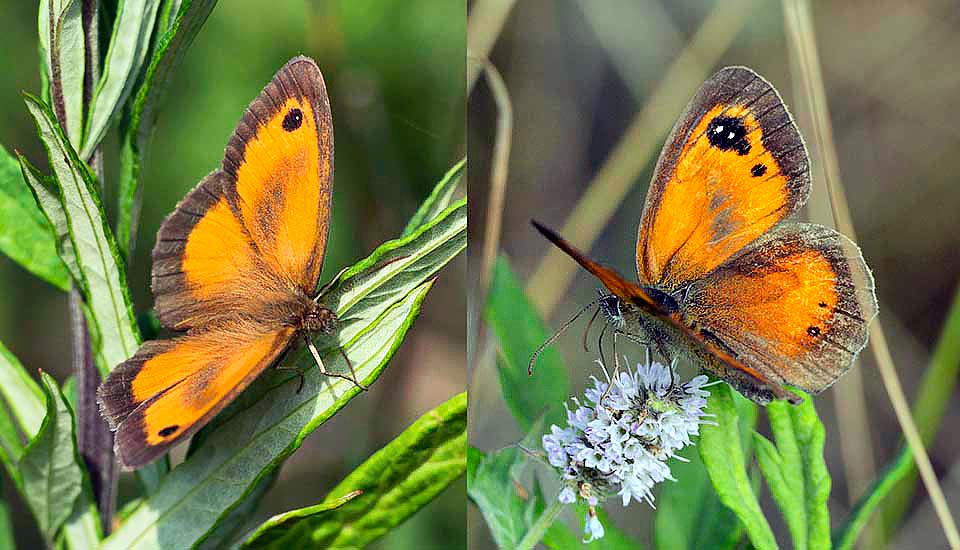 As seen in these specimens, the males have variable ocelli but with typical dark brown band crossing the fore wing almost completely © Gianfranco Colombo

The gatekeeper has only one annual generation. The short period of flight, concentrated in the warmest months, united to the climatic particularity of the temperate area where it lives, do not allow, in fact, to this butterfly to reproduce more times per year. It is thought that in a far future, seen the increased global warming, this butterfly will be able to reproduce more times. There are in fact ongoing studies about the continuous expansion of this butterfly in the northernmost territories.

It flies from mid May to September with a sudden drop in the presences when the late August first summer storms do arrive. In this species the male flies before the female thus giving the opportunity of conquering the territory before its arrival. It lays up to 200 eggs that it drops singly, flying, on the host plants and only at times they are found anchored to the stems. They are greenish but in short time they turn yellowish disappearing and blending with the ground.

Also the caterpillars are greenish at birth but with the growth they become whitish and almost hyaline with a slight coverage of almost invisible down. It hibernates as caterpillar and upon the wake up it begins with extreme slowness the phase of growth that may last even more than two months. The pupa is yellowish and is hanging head down from an herbaceous support on the ground and matures in about two weeks. Host plants of the genera Poa, Agrostis, Festuca, Elymus and other graminaceous.