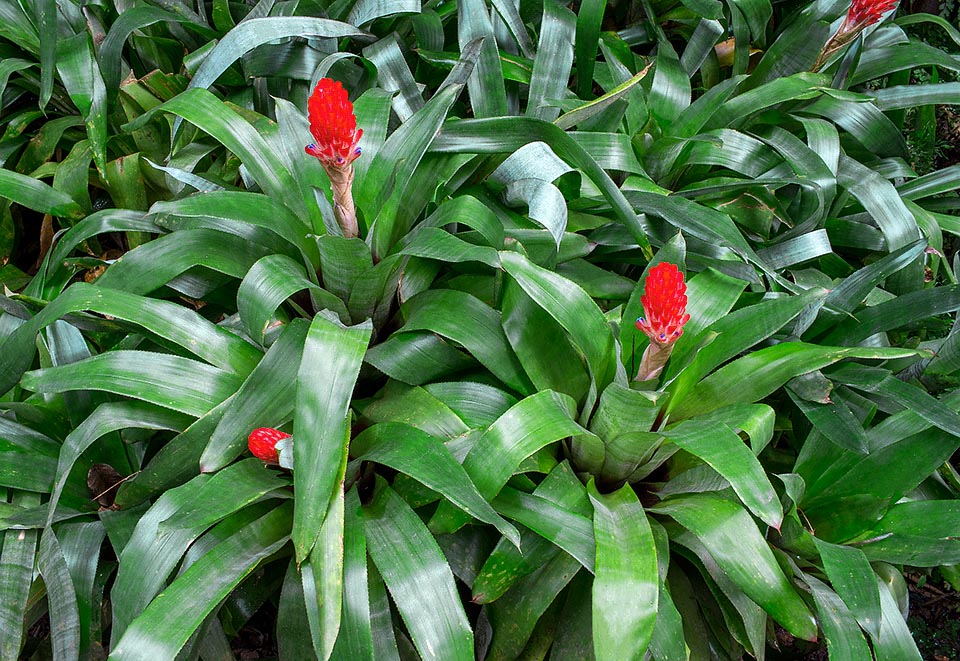 The Quesnelia quesneliana is native to south-eastern Brazil where it grows as epiphyte, but also on the ground, with rosettes of 0,6-1 m of diameter © Giuseppe Mazza

The species is native to south-eastern Brazil (Espírito Santo, Minas Gerais and Rio de Janeiro) where it grows in the coastal belt (restinga) at low altitudes.

Genus and species were dedicated to M. Quesnel, French consul in Cayenne, capital of French Guiana, collector of plants.

Floral scape at the centre of the rosette, erect, robust, 40-50 cm long, wholly covered by acuminate bracts slightly spiny towards the apex, of green colour suffused of brownish pink. The inflorescence is a compact spike, 14-18 cm long, and of 5-7 cm of diameter, formed by linear imbricate bracts with obtuse apex, 4 cm long and 1,5 cm broad, of dark pink to red colour with margins slightly wavy covered by microscopic white scales, that enclose entirely the flowers. 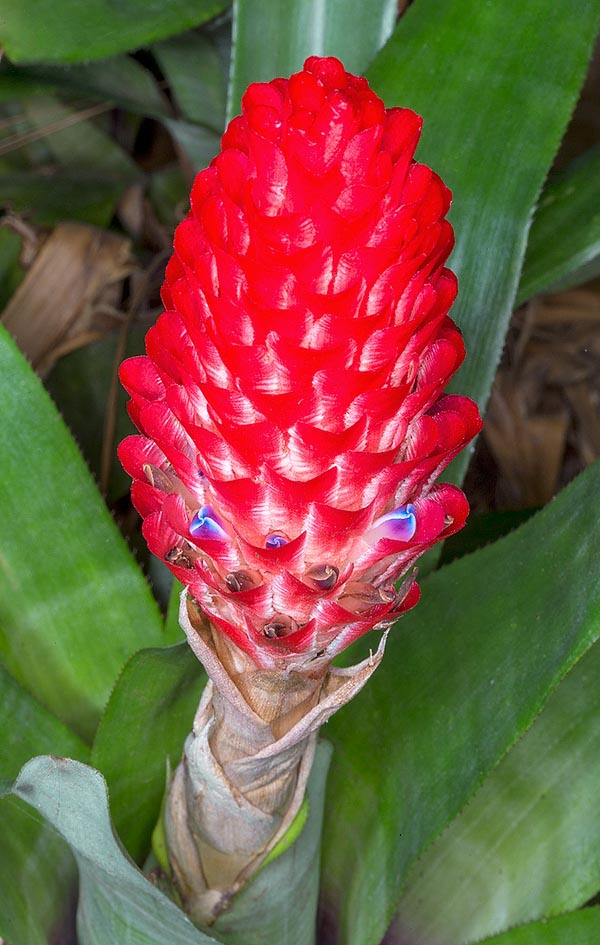 Calyx formed by 3 asymmetrical sepals of pale pink colour, 1,5-2 cm long and 0,5 cm broad, united at the base for about a half of their length, corolla with 3 oblong free petals with obtuse apex, 2,5-3 cm long and 0,5 cm broad, white at the base, lavender blue at the apex, 6 stamens arranged in two series of 3, inside the corolla, and inferior ovary.

The fruit is a berry containing numerous seeds surrounded by a gelatinous substance.

After blooming the plant stops growing, but remains in life for long time, before drying up completely, during which it contributes to the nourishment of the new plants produced at the base.

It reproduces by seed, cleaned of the gelatinous substance covering it, placed superficially on organic draining loam and aerated, maintained humid at the temperature of 24-26 °C, micro-propagation, division and through the new plants produced at the base that may be detached when they have reached a dimension equal at least to one third of that of the mother plant.

Plant of easy cultivation that should deserve a better diffusion, as plant for garden as well as for pot, thanks to the showy inflorescence lasting about two months.

Utilizable in open air in the tropical, subtropical and marginally temperate warm zones, where it can stand temperatures up to about -3 °C for short time, in full sun, for a more compact vegetation, or slight shade.

It grows on substrata rich of organic substance, almost constantly humid as well as on rather poor sandy soils, where it may bear dry periods, paying attention to maintain at the centre of the rosette water not calcareous or rainy to be frequently renewed.

In pot, for the decoration of luminous inner spaces, are utilized porous and draining substrata, that may be formed by vegetable loam with addition of coarse siliceous sand per a 30-40 %. Concerning the environmental conditions, for an optimal growth the winter lowest should maintain over the 15 °C and the humidity between 65 and 80 %, if this is lower recourse may be done to nebulizations in the morning with water at room temperature, not calcareous in order not stain the leaves. As an alternative to the nebulizations, the pot may be put on a wide saucer filled up with expanded clay or crushed stone, with a layer of water not at direct contact with the bottom of the pot.

In summer the watering must be frequent, but without stagnations, rather reduced in winter, in way to allow the substratum to dry up in surface. In summer the water at the centre of the rosette is to be constantly maintained, in winter, in presence of low temperatures, it is preferable to leave it almost dry to avoid possible rottenness.