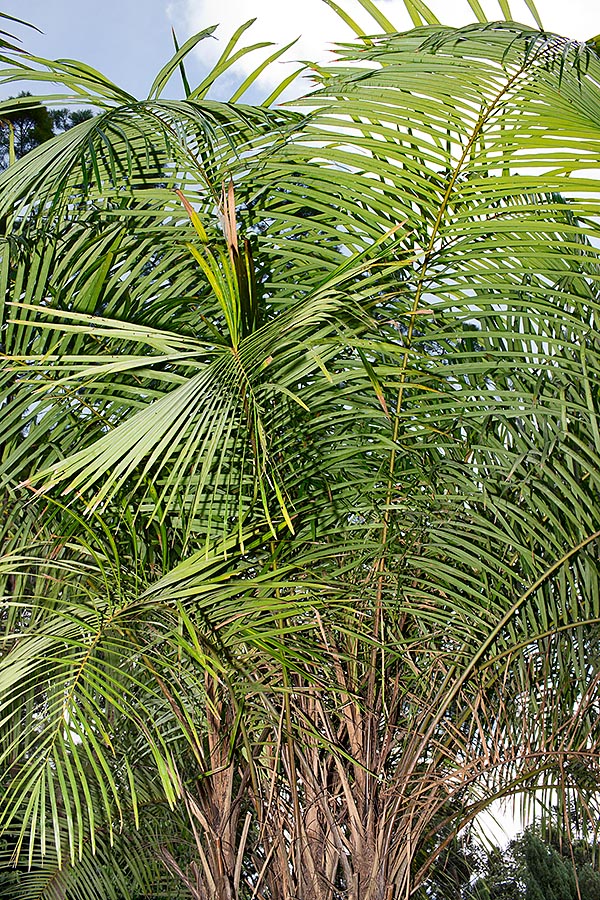 The species is present in Africa: Cameroun and Nigeria, and in America: Brazil (Acre, Amazonas, Amapá, Pará, Roraima, Rondônia and Tocantins), Colombia, Costa Rica, Nicaragua and Panama, where it grows in the humid forests along the water streams on periodically flooded alluvial soils, often close to the sea, representing in some zones the dominant or exclusive species.

The name of the genus comes from “raffia”, name used in Madagascar to indicate the Raphia farinifera; the name of the species is the combination of the Latin substantive “taeda” = flambeau and of the verb “gero” = to carry, to act, with reference to the easily inflammable stems.

The Raphia taedigera (Mart.) Mart. (1838) is a generally cespitous, monoecious, monocarpic species, with erect close stems, 1-4 m tall and of 25-40 cm of diameter, covered by the persistent foliar bases and surrounded at the base by a thick mass of small aerial roots (pnematophores). The leaves, on 1,5 m long unarmed petioles, are pinnate, ascending with curved apex, up to more than 10 m long, with 100-200 pairs of lanceolate linear pinnules, up to 1,2 m long, slightly drooping, irregularly arranged and on different angles giving the leaf a feathery look, with margins and central nervation provided with small thorns. Ramified second order inflorescences produced at the same time between the reduced leaves and bracts at the apex of the stem, 1-3 m long, hanging, carrying unisexual flowers, the male ones at the apex of the ramifications, the female ones at the base; once the fructification is completed the stem dies, but the plants continues its life by means of the new stems emitted at the base.

Ellipsoid fruits, 5-7 cm long and of 3-4 cm of diameter, covered by imbricate glossy reddish brown scales containing one seed only.

It reproduces by seed in sandy loam, maintained humid at the temperature of 24-26 °C, which takes even one year for germinating; the first leaf is bifid. Very diffused species in the wild, but little utilized elsewhere in spite of the ornamental characteristics of its foliage, cultivable in the tropical and, marginally, in the subtropical climate zones in full sun on constantly humid grounds, even if little drained. Of fast growth, is suitable for parks and wide gardens considering the size it may reach; it bears a certain amount of salinity, therefore it can be utilized close to the sea. 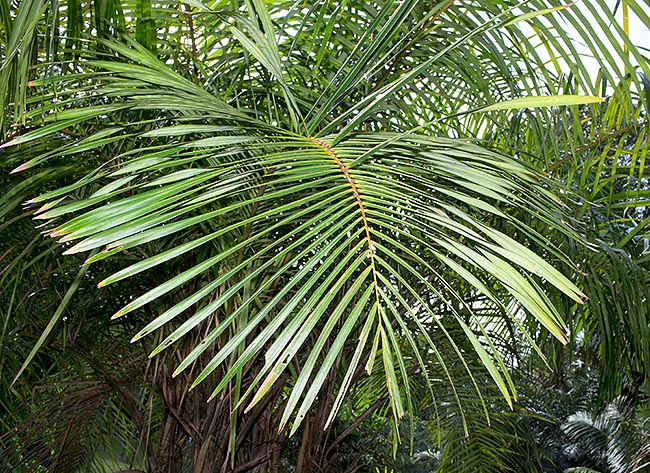 Cespitous, even 4 m tall, has very decorative leaves. From the fruits they get reddish oil used to make soaps, with anti-rheumatic virtues and good characteristics for producing biodiesel © Giuseppe Mazza

The leaves are used by the Amazonian populations for covers and the stems and the petioles for walls and fixtures in the rural constructions, the outer cover of the petioles is moreover used for fabricating traps for crustaceans and fishes and the fibres gotten from the inner part for cordages, baskets, bags, headgears and other handicrafts.

From the pulp of the fruits they get reddish oil used for making soaps and in the popular medicine for frictions against rheumatism, furthermore, the oil has good characteristics for being employed as biodiesel; the fruits are also used for feeding the pigs. The cleaned and polished seeds are used in costume jewellery of for making small artisanal objects.

Much has been discussed about the presence also in America of this species belonging to a genus distributed in Africa and Madagascar, one of the most accredited hypothesis was that the fruits had been come during the slave trade, used as food, but recent archaeological researches and palaeoecological analyses of the sediments have established its presence in the Caribbean area already in pre-Columbian era.