The species is native to south-eastern USA (Alabama, Florida, Georgia, Mississippi and South Carolina) where it lives in the deciduous and swampy forests, often along water streams, mainly on calcareous soils at low altitudes.

The name of the genus is the combination of the Greek substantives “ῥαπίς” (rapis) = needle, stick and “φύλλον” (phyllon) = leaf, with reference to the needle-like fibres; the name of the species is the Latin substantive “hystrix” = porcupine, with analogous reference.

The Rhapidophyllum hystrix (Fraser ex Thouin) H.Wendl. & Drude (1876) is a dioecious caespitose or polygamous-dioecious (both male and female plants can produce inflorescences with hermaphroditic flowers) species, rarely monoecious, with short erect or decumbent stem, up to about 1 m long, in the oldest specimens, and of 10 cm of diameter, almost entirely covered by the fibrous foliar bases and by robust aciform spines, up to 25 cm long, of brown colour and bent upwards. The leaves, on an unarmed 60-80 cm long petiole, are palmate or slightly costapalmate, semicircular to almost circular, 50-80 cm long, divided almost up to the base in 7-22 rigid linear segments with 2-4 veins and bifid or irregularly toothed apex, 1-4 cm broad, of glossy dark green colour above, grey green or bluish green below. 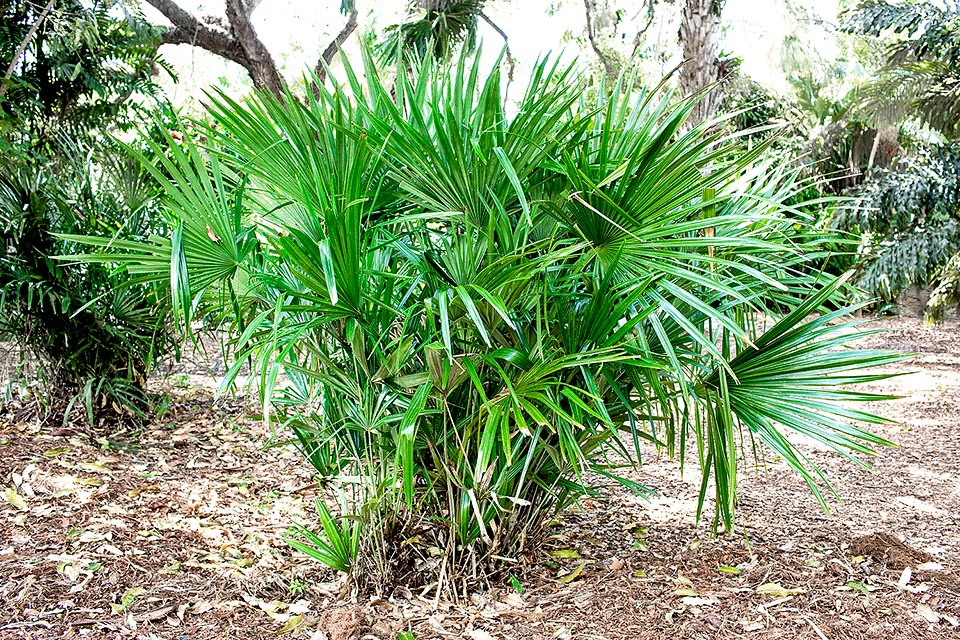 Palm of uncertain sex, dioecious or poylgamous-dioecious, rarely monoecious, Rhapidophyllum hystrix is a caespitose species of South-East USA with short erect or decumbent stems about 1 m long. The foliar bases have robust aciform spines arranged like a porcupine around the stem. Little diffused in cultivation, resists well cold © Giuseppe Mazza

Inflorescences between the leaves (interfoliar) on short peduncle, 10-25 cm long, the female similar to the male ones, but shorter and more compact, with ramifications of first order. Globose male flowers usually in groups of 3, of yellowish brown colour, with 3 sepals and 3 free petals, 3 pistilloides and 6 stamens, similar female flowers, usually in groups of 2, with 6 sterile stamens, 3 free carpels, tomentose at the base, and punctiform stigmas. Globose to ovoid brown fruits with unpleasant smell, about 2 cm long and of 1,5 cm of diameter, covered by deciduous down, containing only one ovoid seed of pale brown colour, 1,2-1,4 cm long and of 1-1,2 cm of diameter.

It reproduces by seed, previously kept in water for 3 days, in draining organic loam maintained humid at the temperature of 26-28 °C, with germination times varying from 1 month to one year, and by division.

Species well known for its resistance to the low temperatures and the ease of cultivation that would deserve a major diffusion, in particular in the temperate climates where adult plants may resist almost undamaged values of temperature up to -18/-20 °C or little less with damage to the aerial part. With rather slow growth, it prefers a semi-shady position and draining soils, rich of organic substance maintained almost constantly humid, but bears the full sun and adapts also to heavy, poor soils and to dry periods, but an even slower growth.