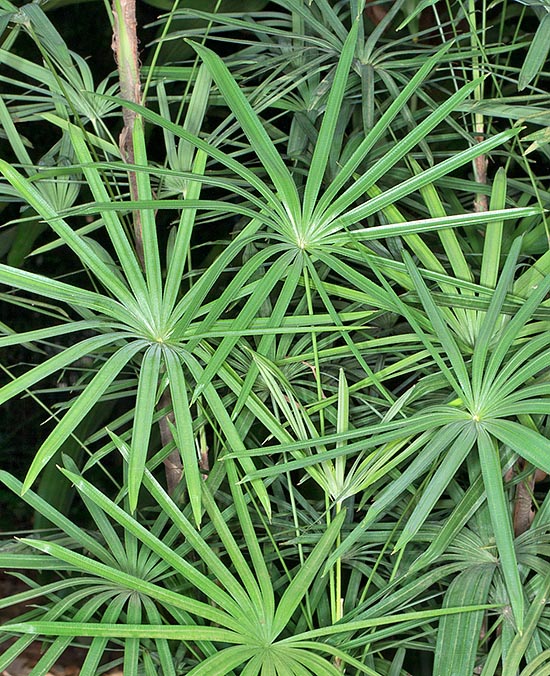 Native to China, Rhapis humilis is a very decorative cespitous palm that can be 6 m tall in nature. Ovoid fruits of about 0,7 cm. Adapts well also to inner spaces cultivated in pot © Giuseppe Mazza

The species is native to China (Guizhou and Guangxi) where grows in the underwood of the dry evergreen forests usually on calcareous slopes up to about 1000 m of altitude.

The Rhapis humilis Blume (1839) is a slow-growing, unarmed, cespitous, dioecious species with thin erect stems, that may reach the 6 m of height with a diametre of 1,5-2,5 cm, covered by the persistent foliar sheaths forming a dense network of dark brown fibres.

The leaves, on an up to 30 cm long thin petiole, are palmate, semicircular to lunulate (crescent-shaped), about 60 cm broad, divided up to about 3 cm from the petiole in 7-20 1-2 cm broad segments with more or less pointed and slightly drooping apices, of dark green colour. Inflorescences among the leaves (interfoliar) about 40 cm long, ramified, with up to 15 cm long ramifications, the male flowers as well as the female ones present sepals and petals merged at the base to form a calyx and a corolla tubular trilobed. Ovoid fruits of about 0,7 cm of diametre.

It reproduces by seed, rarely available, but usually and easily by division in spring-early summer or through the suckers emitted at the base provided of roots. The Rhapis humilis, along with the Rhapis excelsa, thanks to the elegance of the foliage, the contained size and the facility of cultivation stands among the most cultivated and since the longest time, ornamental palms, more than three centuries, before in Japan, then in Europe, in particular for inner places decoration.

Of remarkable landscape effect, can be cultivated as single group, fence or hedge in the subtropical and temperate regions, in the tropical ones it gets a less luxuriant look, is quite resistant to the low temperatures, as it can stand values of -6 °C for a short period, and is not particular about the soil provided the same is well drained.

It loves a semi-shaded exposition, but bears well the full sun as well as the shade, proving to be one of the palms more tolerant to quite different light conditions. Due to its characteristics has proved immediately suitable to the cultivation in pot, utilizing a draining loam, preferably rich of organic substance, with waterings that from spring to autumn, when it’s in vegetation, must be regular and abundant, but without stagnations, and allowing the loam to slightly dry up before watering again, more reduced in winter, when the temperatures are lower, but which are better not to decrease under the 10 °C.

One fertilization per year, in spring, is sufficient, utilizing a slow release balanced product with microelements, at half the dosage recommended on the package. The repottings are to be done when the roots have filled up the pot, utilizing one pot of a slightly bigger diametre.