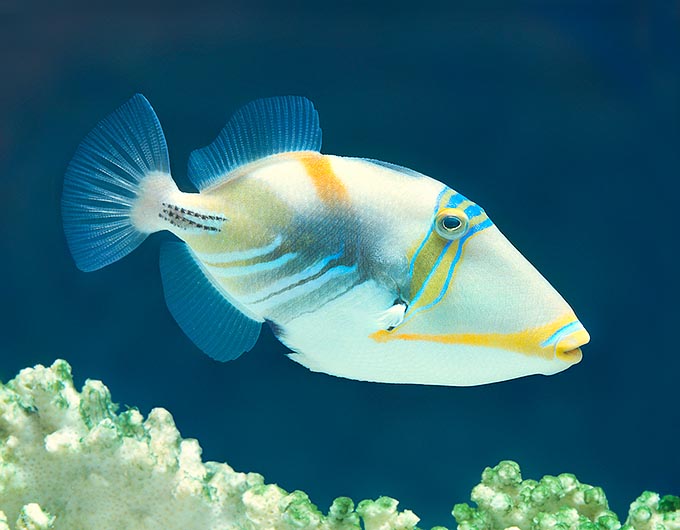 The showy White-banded triggerfish also known as the Picasso triggerfish (Rhinecanthus aculeatus Linnaeus, 1758) belongs to the class of Actinopterygii, the ray-finned fishes, to the order of the Tetraodontiformes and to the family of Balistidae, the so-called triggerfishes.

The name of the genus Rhinecanthus comes from the Greek “rhinos” = nose, snout and from “ahantha” = spine, with probable reference to the particularly elongated snout for a Balistidae and to the dorsal spine.

The specific epithet, given by Linnaeus, comes from the Latin adjective “aculeatus” = with spines, and underlines the presence of spines in the caudal peduncle.

The white-banded triggerfish has a very vast distribution.

As a matter of fact, we find it in the tropical waters of the Atlantic Ocean as well as in those of the Indo-Pacific. It is present along the African coast from Senegal to South Africa and then goes northwards up to the Red Sea. As an indication, it is frequent also in the Seychelles Islands, Mauritius, Réunion and Maldives, in India, Sri Lanka, Thailand, Australia, Indonesia, New Guinea, Micronesia, Philippines, Taiwan and in China up to southern Japan. Eastwards, it is at home in Kiribati, Samoa, the Marquesas Islands, Tuamotu and the Hawaii. In the southern hemisphere, it reaches Tonga, New Caledonia and Lord Howe islands.

The white-banded triggerfish loves the sandy zones, with still waters, as it lives among the madreporic formations up to 50 m of depth. 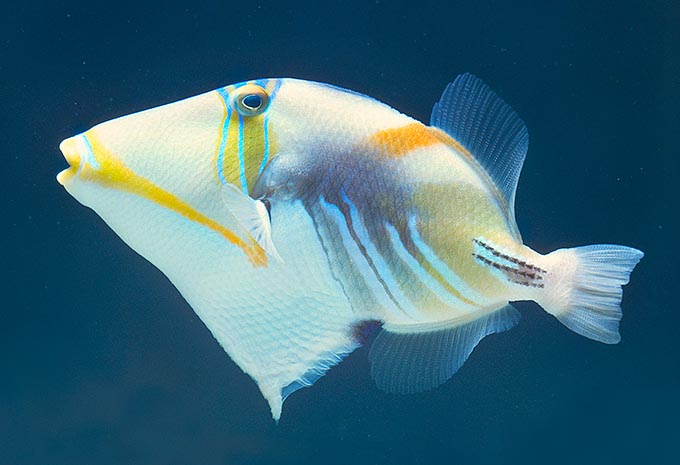 It may reach the 30 cm of length, but usually, especially when in aquarium, it does not exceed the 15-20 cm. The snout is elongated if compared to the other triggerfishes and the body, decidedly flat, seems almost a trapeze when the ventral zone is stretched as intimidation. Like all triggerfishes, it is protected by a solid coating of bony scales. They are scabrous and spiny close to the caudal peduncle.

We note on the back the typical erectile trigger formed by three spines, which the fish can block, for defence, in erect position. The first is long and sharp, like a rapier, and seen that it keeps the position also when the animal is dead, it usually deters the aggressors. The second dorsal fin has 23-26 soft rays and is symmetrical to the anal, which has 21-23 of them. The pectoral ones count 13-16 unarmed rays, the ventral are reduced to a spike and the caudal is rounded in the juveniles and almost truncated in the adults. The mouth, small but robust, is armed by sharp and cutting teeth. Not wrongly, the livery recalls Picasso’s paintings. On the base colour, almost white in the lower part of the body and cream grey up, stand out in fact some black strokes converging in a central spot. An orange trait goes from the pectorals to the snout, whilst another crosses the back. Between the pectorals and the eye we note three turquoise vertical bands delimiting a yellow-greenish zone and continuing, widening, on the back where the central one divides in two thus forming 4 bands. Towards the caudal peduncle the background colour turns greenish and some black stripes stand out underlining the presence of spines.

The white-banded triggerfish practically nourishes of almost all what it finds: echinoderms, crabs, shrimps, ascidians, tubeworms and eggs of other fishes. It can hole without any difficulty the shells of the bivalves and of the gastropods crumbling as nothing the branches of the madrepores looking for tasty polyps. 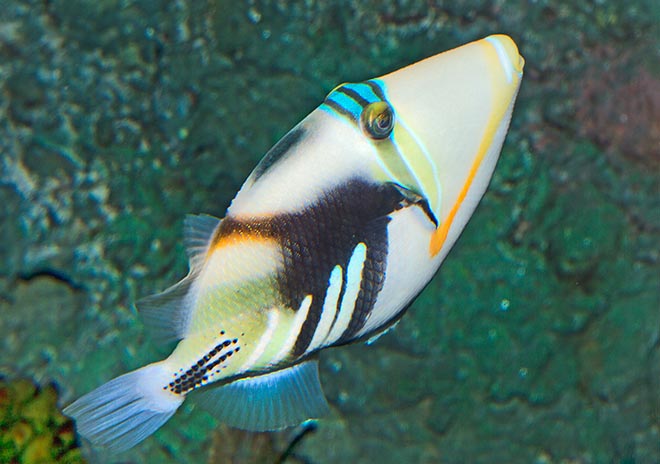 Omnivorous, territorial and aggressive, it is to stay in aquarium with suitable guests © Giuseppe Mazza

It eats also small fishes and does not disdain the weeds, the foraminiferans and the debris.

With such a diet it is clear that it is fully suitable for the aquarium life, even if then do arise problems of incompatibility with its fellows due to the marked territorial instinct, and it is necessary to renounce to the invertebrates and other small species as they sooner or later would end up in its stomach.

In nature, when feeling in danger, before taking shelter among the madrepores it emits strange grunts, possibly an alarm cry for the fellows.

Also when it is taken off from the nets, it puffs into the hands of the fishermen, so much that in the Hawaii they call it “Humu-Humu-Nuku Nuku-apu’a”, which means “fish that once out from the water cries like a pig”.

The eggs, spawned in small masses or stripes in a nest dug in the sand, are surveyed until the hatching and then the female protects the newborns for a certain time. The populations may double in less than 15 months, and seen the ample distribution, even if it is often taken in the nets and is hunted for the domestic aquaria, the vulnerability index of the species is presently modest, of 30 over 100.