The odd showy Wedge-tail trigger- fish (Rhinecanthus rectangulus Bloch & Schneider, 1801) belongs to the class of Actinopterygii, the ray-finned fishes, to the order of the Tetraodontiformes and to the family of Balistidae, the so-called triggerfishes.

The name of the genus “Rhinecanthus” comes from the Greek “rhinos” = nose, snout and from “akantha” = spine, with probable reference to the snout, elongated for a Balistidae and to the dorsal spine.

The name of the species “rectangulus” evokes the presence of a showy rectangular black spot on the sdes.

The wedge-tail triggerfish is present in the tropical waters of the Indo-Pacific, which it often shares with the better known Rhinecanthus aculeatus.

As an indication, it is present from South Africa to Somalia and the Red Sea, to the Seychelles, Mauritius, Réunion and the Maldives, in India, Australia, Indonesia, New Guinea, Micronesia, Philippines and Taiwan up to southern Japan. Eastwards, it’s at home in Samoa, the Marquesas Islands and the Hawaii. In the southern hemisphere, it reaches Tonga, New Caledonia and Lord Howe islands.

Usually, it goes swimming between the 10 and 20 m of depth, therefore in a more restricted belt than that of the Picasso triggerfish.

It may reach the length of 30 cm, but usually rarely exceeds the 15-20 cm. The snout is elongated and the flat body is protected like all triggerfishes by a solid covering of scabrous bony scales.

On the back we note the typical trigger formed by three spines, which the fish may block in erect position. The first is long and sharp, as always is the case, and seen that it keeps the position even after the death, it may cause injuries and discourages the aggressors. 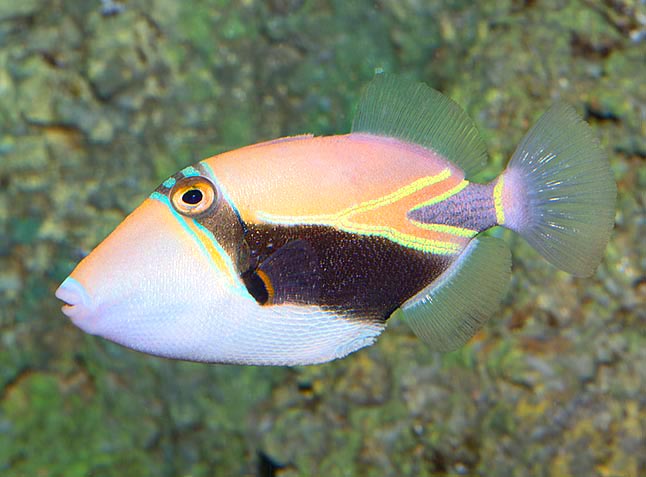 Solitary and territorial, when in aquarium it doesn't tolerate conspecifics © Giuseppe Mazza

Furthermore it is useful for the animal for entering, with lowered trigger, shelters having a small access, where it can arm it and sleep undisturbed, sure of not being carried away by the currents.

The small but robust mouth has solid sharp teeth, capable to crumble shells and madrepores.

The most marked differences with the Picasso triggerfish are noted in the livery. The base colour is similarly clear in the lower part of the body, up to the rectangle, but much more intense upwards. The black zone of the sides prolongs up to the eye reducing to three lines on the back where we note, as for the Picasso triggerfish, four turquoise zones. At the base of the pectoral fins stands out a red arc, but the orange traits towards the snout and the back are not present, replaced in the caudal zones by a typical V-shaped drawing rotated towards the tail, with the yellow edge. The remaining zone, towards the caudal peduncle, is almost black in the adults and has, like in the other species, some spines. Finally, we may talk of a caudal black wedge with coloured borders, hence the English name of “Wedge-tail triggerfish”. We have finally to say that, like a chameleon, the wedge-tail triggerfish may vary the intensity of its colour depending on the circumstances. When it’s scared or is sleeping, this fades, whilst the rank is evidenced by showy tints.

The diet is analogous to the Picasso triggerfish’s one: echinoderms, crustaceans, ascidians, molluscs, tubeworms, sponges, corals, foraminiferans and eggs. It eats also the small fishes and, above all, it cleans up the reef from the weeds and the debris. Like Rhinecanthus aculeatus in case of danger it emits grunts and like Balistes vetula it moves the sand with water jets from the mouth in order to drive out the preys.

Definitely territorial, it lives in pair only during the reproductive period and if in the large aquaria it tolerates the other Balistidae it accepts the conspecifics with difficulty. The eggs are spawned in a nest dug in the sand. The populations can double in less than 1,4-4,4 years, and as is the case for the Picasso triggerfish, the vulnerability index of the species is presently modest: 31 over 100.