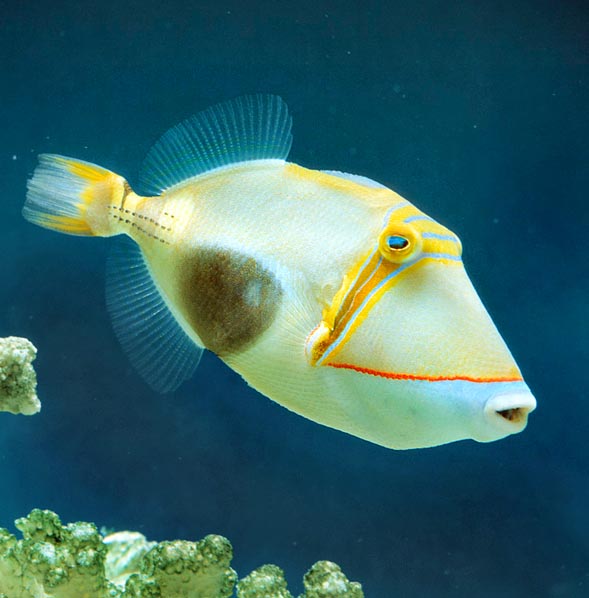 The Blackbelly triggerfish (Rhinecanthus verrucosus Linnaeus, 1758) belongs to the class of Actinopterygii, the ray-finned fishes, to the fanciful order of Tetraodontiformes and to the family of Balistidae, the so-called triggerfishes.

The name of the genus “Rhinecanthus” comes from the Greek “rhinos”) nose, snout and from “akantha” = spine, with possible reference to the snout, elongated for a Balistidae and to the dorsal spine.

The specific epithet, given by Linnnaeus, comes from the Latin adjective “verrucosus” = with warts, underlining the presence of warts in the caudal peduncle.

The blackbelly triggerfish is present in the tropical waters of the Indian and the Pacific oceans, often in cohabitation with two quite similar species: the Rhinecanthus aculeatus and the Rhinecanthus rectangulus.

As an indication, it is present in the Chagos Archipelago, the Seychelles, Sri Lanka, Australia, Indonesia, New Guinea, Micronesia, Philippines and Taiwan up to southern Japan. Eastwards, it reaches the Solomon Islands and southwards, Vanuatu.

Usually, it is found, like the Rhinecanthus rectangulus, between the 10 and 20 m of depth, that is, in a much more restricted belt if compared to the Rhinecanthus aculeatus. It loves sandy zones protected by the reefs, rich of ramified madrepores, where it can find, in case of danger, and easy shelter.

It reaches a maximum length of 23 cm, rarely exceeding the 20 cm. The snout is elongated, the body is flat, protected like the other Balistidae by a coating of bony scales. On the back, it has the typical trigger the fish may block in erect position. It is formed by three spines, but the one that counts is the first, long and sharp, which remains in position also after the death, causing injuries to the mouth and the stomach of the greedy predators. As usual among the triggerfishes, it is used also for entering, with the trigger lowered, shelters having a short entrance, wherein, erecting it, this fish may calmly sleep, sure of not being carried away by the currents. 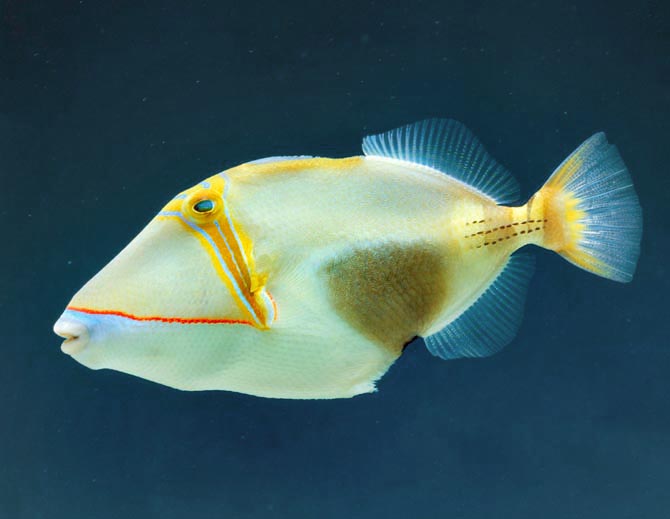 The most salient feature of the livery is a dark spot interesting the lower part of the body from the beginning of the caudal fin to the black traits of the caudal peduncle, hence the Italian name of spotted triggerfish. The zone under the snout is, like the other two species, clear and the upper part is darker.

Like Rhinecanthus aculeatus there is a red-orange line starting from the base of the pectoral fins towards the snout, but here it is thinner and ends over the mouth. Analogous is, on the contrary, the drawing starting from the pectoral ones and reaching the eyes and the back, even if the yellow strokes are by sure wider than the turquoise ones. The translucent caudal fin is bordered of yellow.

The diet is analogous to that of the other Rhinecanthus: echinoderms, crustaceans, ascidians, molluscs, tubeworms, sponges, corals and foraminiferans. In its diet enter also small fishes, eggs, weeds and debris. Decidedly territorial, it lives in pair only during the reproductive period and badly tolerates in aquarium the presence of the conspecifics. The eggs are spawned in a nest dug in the sand. The populations can double in less than 15 months and the vulnerability index of the species is presently low: 26 over 100.