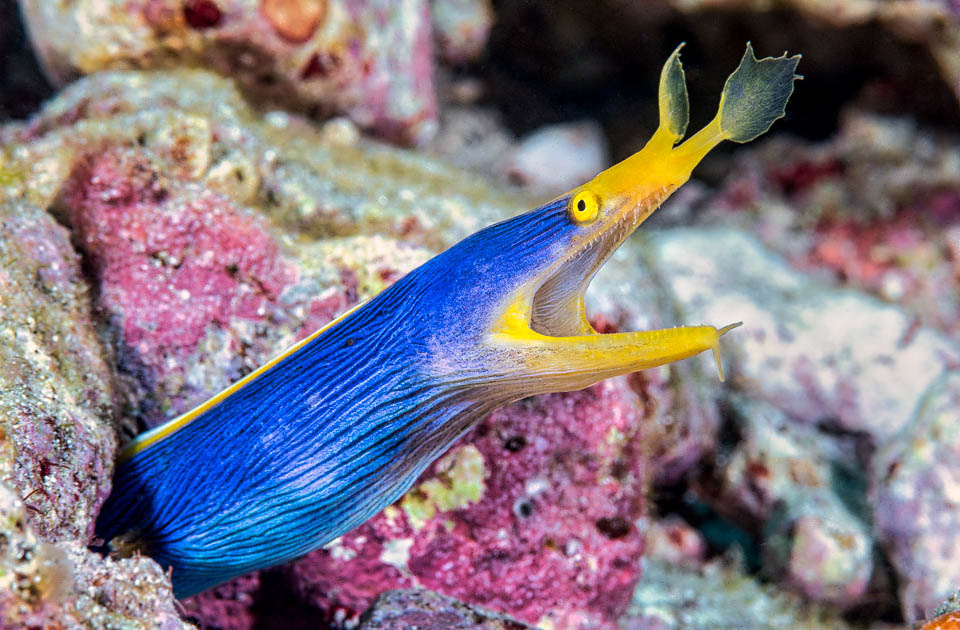 Unmistakable for the showy livery and its odd nasal expansions, Ribbon moray (Rhinomuraena quaesita) has a very vast range in the tropical Indo-Pacific © Francois Libert

Unusual member of the family Muraenidae, the Ribbon moray (Rhinomuraena quaesita Garman, 1888) belongs to the class of the Actinopterygii, the ray-finned fishes and to the order of the Anguilliformes.

The name of the genus Rhinomuraena comes from the old Greek “μυκτήρ” (rhinos), nose, and from “muraena”, the Latin name with which the Romans did call the eels, due to its strange fan-shaped nasal expansions, whilst the specific term quaesita, looked in Latin, from “quaero”, to look for, is current nowadays not only because it is not easy to be found, being hidden in the den from which emerges only the head, but because it is one of the most sought after species by the underwater photographers, and also by the aquarists. 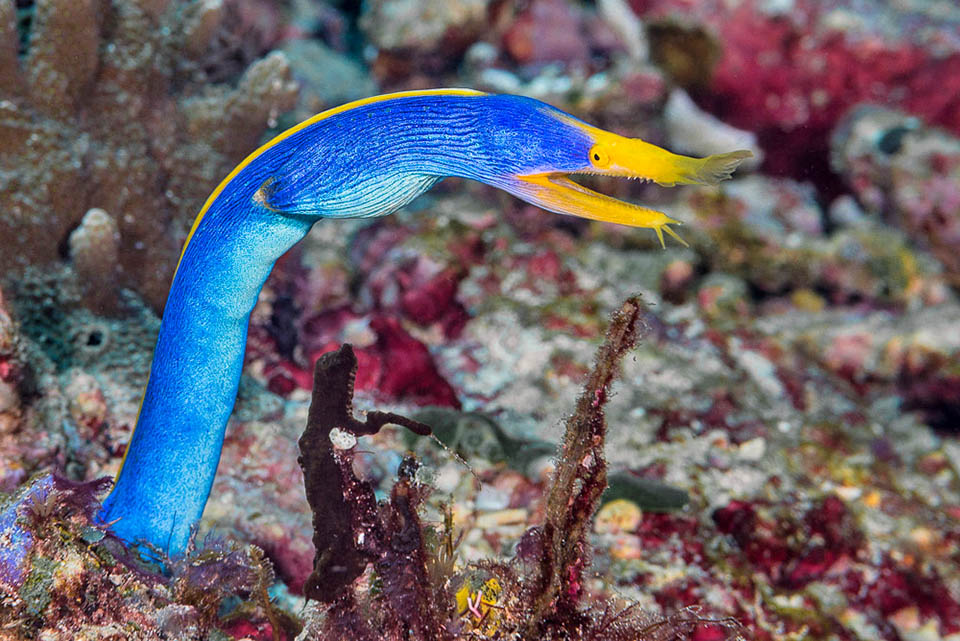 Active mainly by night, it spends three quarters of the day hidden in a den emerging with the head to see if there are prey around © Francois Libert

Rhinomuraena quaesita has a very vast range in the tropical Indo-Pacific. We find it along the coasts of Tanzania, Madagascar, Réunion, Mauritius, Mayotte, Seychelles and Maldives. Moving eastwards, it is present in the Andaman Islands, in Indonesia, in Christmas Island, Timor Leste, Palau, Papua New Guinea, Australia and New Caledonia.

Northwards, after the Philippines and Vietnam, it reaches Taiwan, the Ryukyu Islands, the Ogasawara Islands and Japan. In Oceania, after the Mariana Islands, is then present in the Marshall Islands, Tonga, Samoa, Cook, in French Polynesia and in Tuamotu. 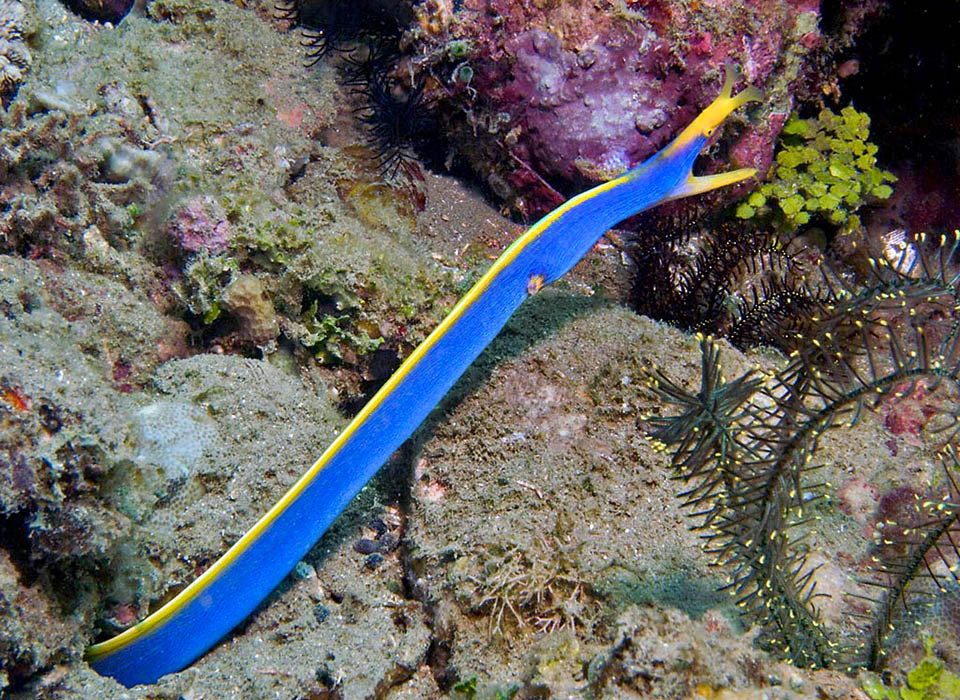 This is a male livery, yellow and blue. We note gill opening and the typical long Muraenids fin replacing the others. Here it is always yellow in all life phases © Nuria Morató

The Ribbon moray is a benthic animal loving the warm waters of the lagoons and the detrital bottoms. It usually lives in shallow waters, but has been sighted even at 67 m. It spends three quarters of the day hidden in a den, surfacing at times only with the head to see if there is any prey around.

Harmless for the man, is very compressed laterally. 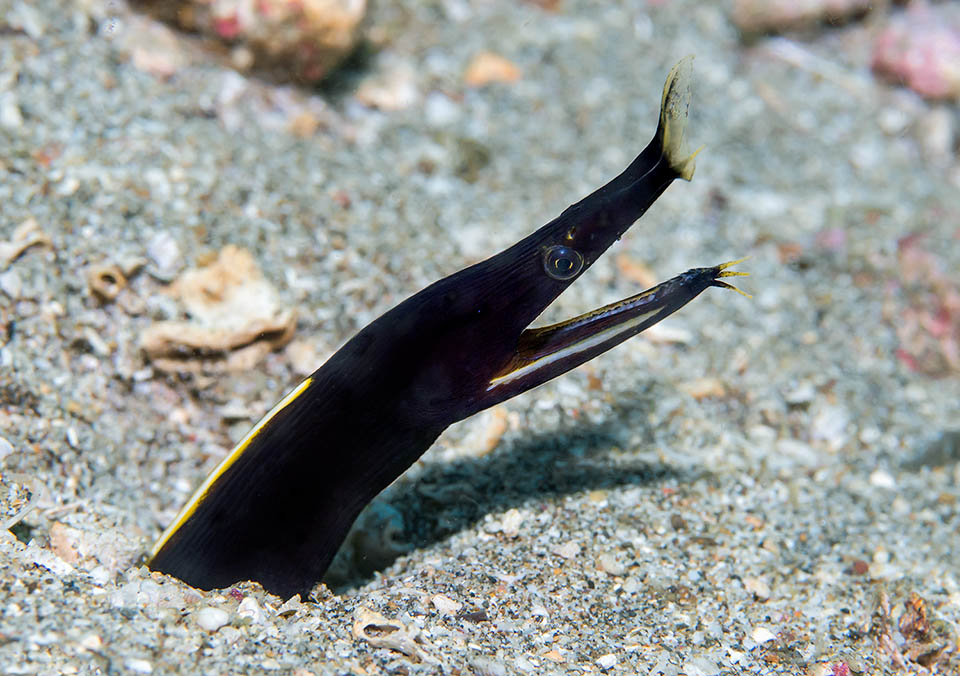 In jet black colour young, it’s the only coloured note, like the yellow on the head intriguing the preys. The eat small fishes, held by the curved teeth and swallowed whole © Brian Cole

As is the case for all morays, the pectoral and ventral fins are absent. The body, serpentiform, without scales, is equipped with a protective mucus against the ectoparasites that, covering a little at a time the walls of the den, allows the animal to glide fast, without any damage, up and down from its hole.

The gill openings are reduced to two simple holes on the neck, often evidenced by a chromatic contrast and especially by the breath of the animal that dilates and deflates this zone. 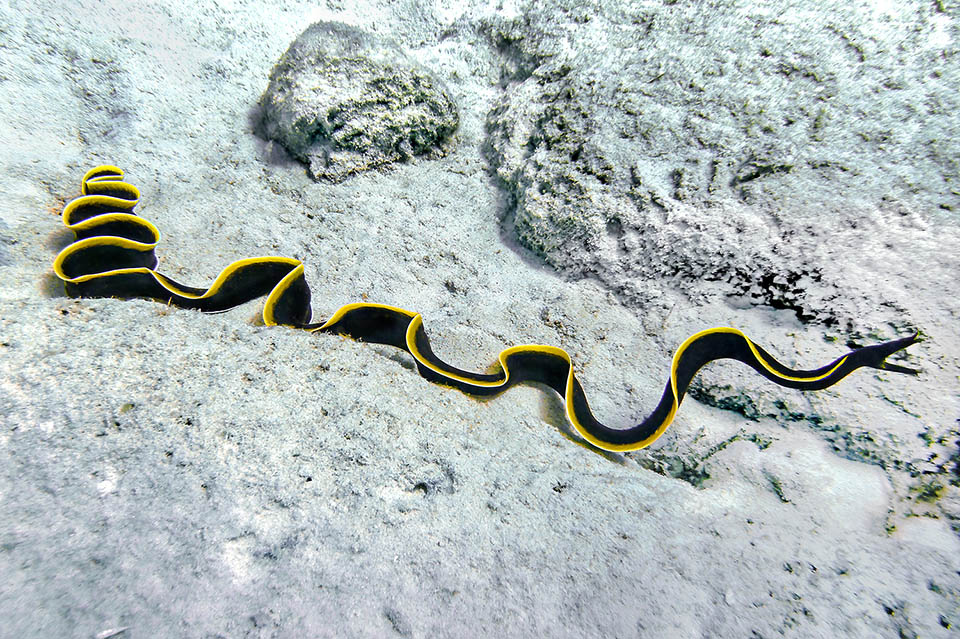 The Ribbon moray is not territorial and at times, as is the case of this young, it may move looking for areas with more fishes © Ralph Behrens

The eyesight is modest, compensated by a perfect sense of smell, ensured by the two big tubular nostrils ending in translucent oval fan, and by particular sensory organs like the three tentacles of the lower jaw and the pointed fleshy protuberance placed between the nostrils and the tip of the muzzle.

The mouth has only one row of thin and small maxillary teeth, leaning back, for catching the small fishes it nourishes of. They are certainly not suitable for chewing and consequently gulps them down whole, like the snakes.

Apart from the dorsal fin, always yellow in all liveries, the colour of the body changes during the life going through three stages. 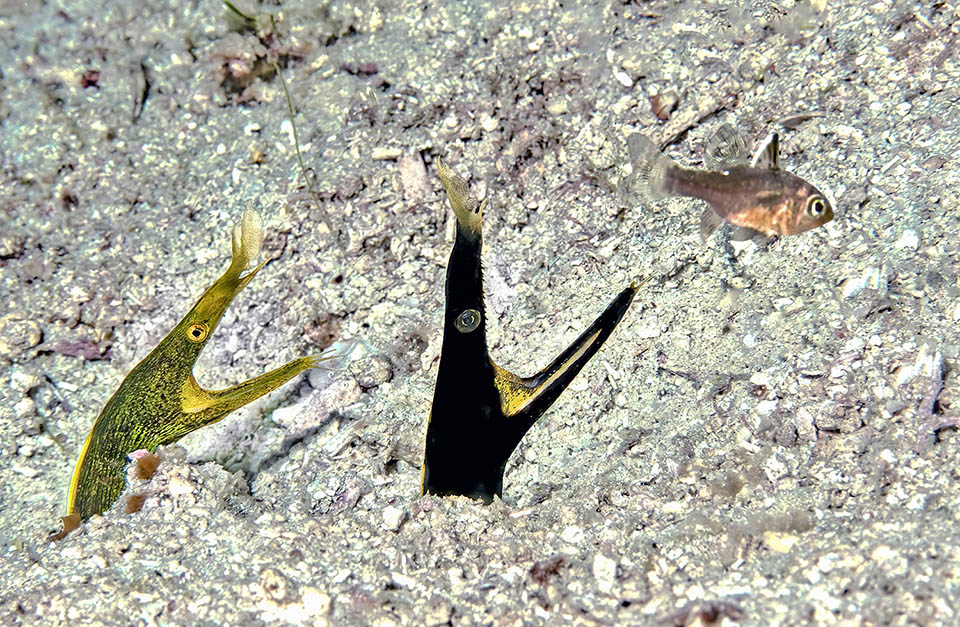 Here two differently aged specimens share friendly the same den, evidently well located, seen that there is one of their usual preys going around © Massimo Leone

The young are black, being the males electric blue and the females yellow with still often some of the blue in the final part of the body. These last are actually old males that have changed sex, phenomenon that usually occurs when about 90 cm long.

Rhinomuraena quaesita is, in fact, like the Gilt-head bream (Sparus aurata), a proterandrous hermaphrodite species: that is, upon their birth these fishes have both sexes, but the male gonads develop first and only later on the females will take over.

Needless to say that all this has also intermediate liveries, and at the present state of knowledge it is the only moray that undergoes these abrupt changes of colour and of sex. 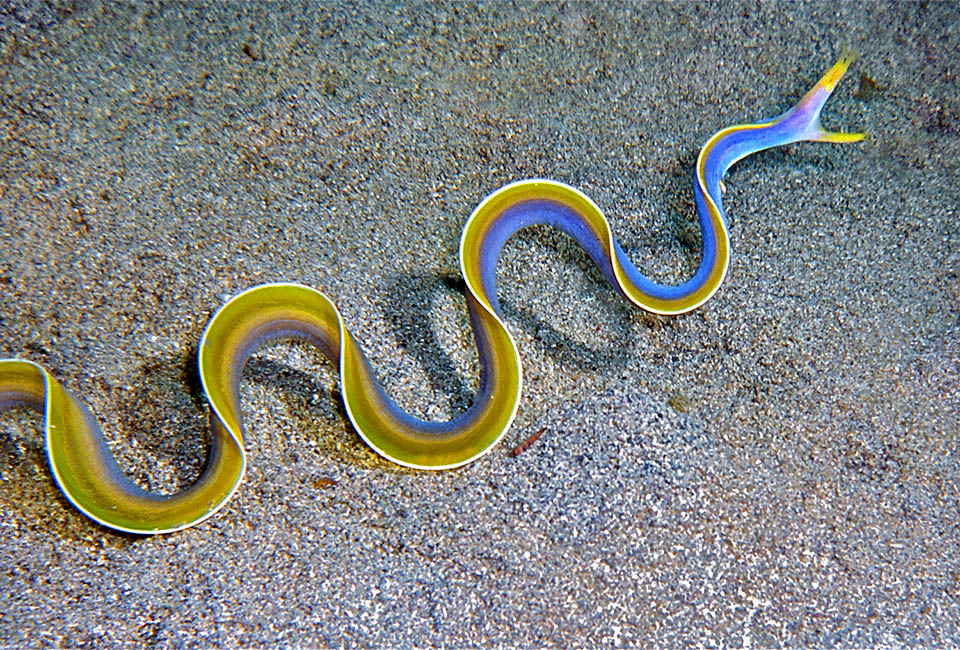 Here two differently aged specimens share friendly the same den, evidently well located, seen that there is one of their usual preys going around © Massimo Leone

Rhinomuraena quaesita is not a territorial species. In fact, it often moves from a hiding place to another one in different zones and it is not rare to find a den with two specimens, not necessarily male and female, that ogle around.

Mainly active during the night, the Ribbon moray eats small fishes it finds in the most complete darkness thanks to its sense of smell.

The eggs are pelagic and the larvae, called leptocephalus, are transparent, shaped like a leaf of willow, with a very small head. These characteristics are present in all Anguilliformes and are considered archaic in the evolutionary history of fishes. 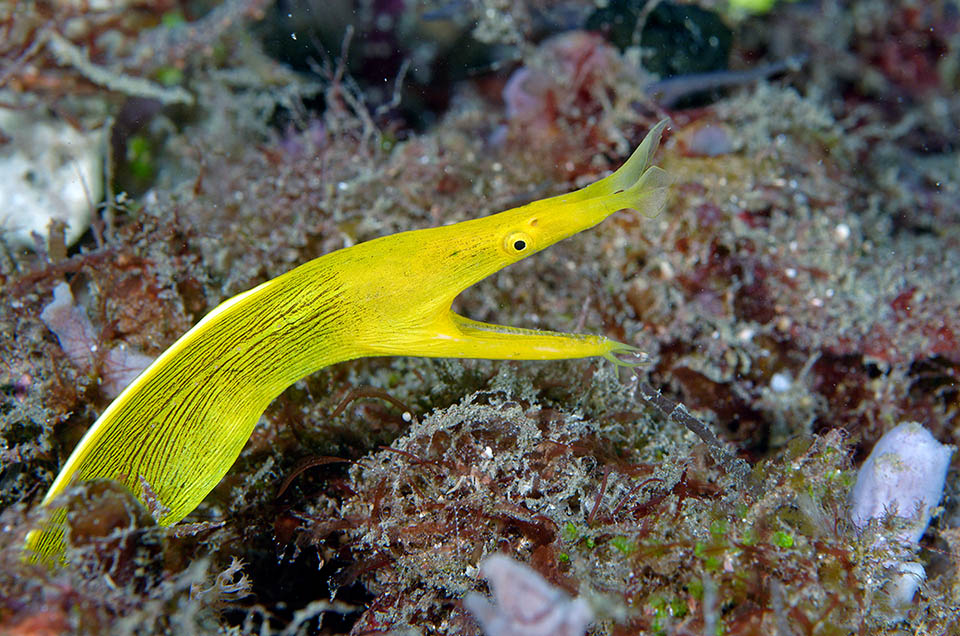 At this point livery gets yellow. The Ribbon moray is an endangered species, and to have several end cycle females increases the members of the isolated populations © Benoit Lallement

Though much in demand by the aquarists, the Ribbon moray is not a species suitable for the domestic aquaria. Not only is it difficult to feed, but the trade animals, often caught unscrupulously for the environment using the cyanide, have the liver compromised and short life.

Moreover, nowadays, in 2022, it is also considered as an endangered species to be protected, seeing the very low resilience with a minimum doubling time of the populations decimated by the events of more than14 years. Therefore, the vulnerability index already marks 73 on a scale of 100.