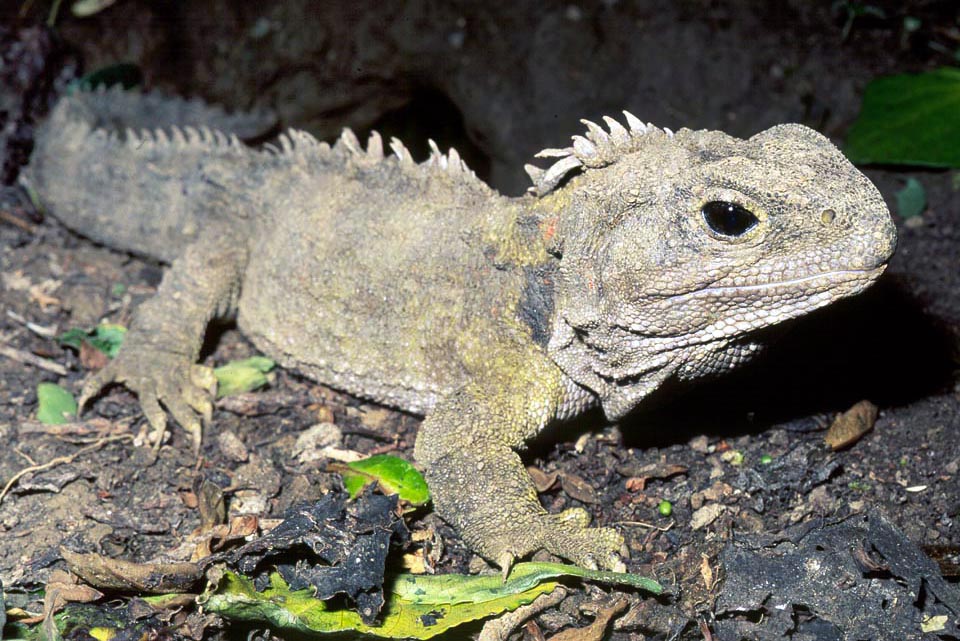 The order of the Rhyncocephals (Rhynchosephalia), includes presently only one species endemic to New Zealand: the Tuatara (Sphenodon punctatus) © Paddy Ryan

The presently living reptiles, after the traditionally accepted classification, are subdivided in four different orders: Crocodilia (crocodiles, alligators and caymans), Rhynchocephalia, Squamata (that include saurians, snakes and amphisbaenas) and Testudines (or Chelonia, that is, tortoises and turtles). After the cladistics, that takes into account the phylogenetic affinities, to these groups we have to add also that of the Aves, the birds, that, as derivates from theropod dinosuars, should be included in the reptiles.

The Tuatara has the general appearance of a big lizard with a maximum length of 70-80 cm and is famous for the remarkable development of the “third eye” or parietal eye.

Nowadays the sphenodon is present in several islands off the north-eastern coast of the North Island and some islands of the Cook Strait, that divides the North Island from the South Island. It is estimated that presently the total population of Tuatara amounts to about 60000-100000 specimens. During the last 150 years, the Tuatara have extinguished in many New Zealand islands due to the destruction of their habitat and due to the introduction done by the man of “alien” species such as pigs, dogs and cats.

The origin of the rhynchocephalians dates back to a geological period close to that who saw the separation of lepidosaurians (Tuatara, lizards, snakes and amphisbaenas) and archosaurs (the group including crocodiles and dinosaurs, including then also the birds). 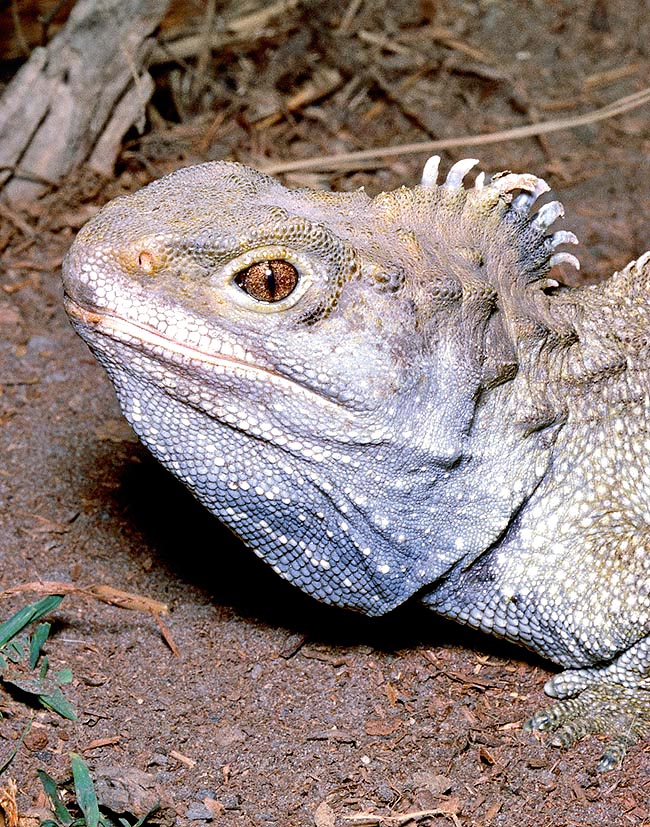 The first fossils of rhynchocephalians, just prior to the dinosaurs, in fact, date back to the Middle Triassic around the 240-250 million of years ago, and therefore stand among the oldest between the lepidosaurians.

That of the rhyncocephalians is considered as the sister group of the squamates (that include lizards, snakes and amphisbaenas), to which they are united in the monophyletic clade of the lepidosaurians (in the clades systematics two or more taxa, that is taxonomical unities, coming from a common progenitor are called brother groups or, after the English terminology commonly utilized, sister groups. As taxonomical unities may be intended for instance some animal or vegetal species, some families, some genera, etc.).

The lepidosaurians are characterized by a series of shared features, among which we recall the presence of skin derivatives with protective functions, such as the scales , the loss and the periodical replacement of the epidermis (moult or ecdysis), the opening of the cloacal fissure in transversal position and the presence of pre-set plans fracture in the tails of the tail vertebrae, which allows the phenomenon of the caudal autotomy, that is the capacity of losing part of the tail or of self mutilating, with the purpose to distract a predator leaving to him a non-vital part of the own body. The tail is then in condition grow again more or less completely. The caudal autotomy, very frequent in the lizards, is rarer in other lepidosaurians like the snakes but is considered however a primitively present character in all lepidosaurians. Many of them have lost this capacity that however some membres of the group, like some lizards and snakes, has evolved again and independently, even if it manifests with different modalities.

A shared character is also the presence in the male, instead of a single penis, as is the case of crocodiles, birds, mammals and turtles, of a couple of hemipenes used during the mating (it is to be noted that the hemipenes are not visible in the adult Tuatara, but in the embryo is present their abbozzo, that during the development is reabsorbed). In the Tuatara, the insemination, seen the absence of the hemipenes, takes place through the apposition of the cloacas of the two partners.

The Lepidosauria, that is the whole of Squamata and Rhynchocephalia, represent an important quota of the present terrestrial fauna. However, whilst the other squamata include nowadays more than 7000 species, as we have already told, the only species of rhynchocephalian presently existing is the Tuatara of New Zealand.

Conversely, the fossil findings prove that the Sphenodontidae, the most successful group among the rhynchocephalians, have been, among the lepidosaurians, the forms dominating for the whole Triassic and the Jurassic. In the Cretaceous the rhynchocephalians extinguished almost completely in Laurasia, that is in the continental landmass that will originate Eurasia and North America, replaced by the squamata that at the time were in full expansion.

On trhe contrary, in South America, in particular in Patagonia the sphenodontides remained long time abundant forming the dominant reptilian fauna until the end of the Cretaceous. 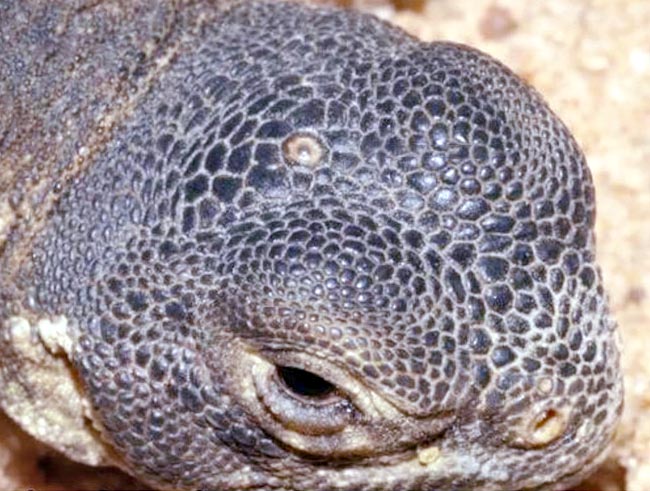 It is famous for the big development of the “third eye” on the head, visible in the young, called parietal eye © Southland Museum & Art Gallery, Invercargill

Some of the morphological characteristics of the rhynchocephalians, and present in the Tuatara as well as in the fossil forms, are those involving the teeth, that are united to the bones of the jaws without the presence of alveoli (acrodont set of teeth). The teeth have moreover a disposition unique among all vertebrates: in the upper teeth arch are present two rows of teeth whilst in the lower one is present only one row that, when the mouth closes, it adapts perfectly between the two upper ones, thus facilitating the shredding of the food.

In the most primitive the shape of the teeth in the rhynchocephalians was suitable for an insectivorous diet, therefore with thin and acuminate teeth; later on, in the various progenitors of the modern Tuatara, they have diversified in teeth sets good for herbivorous and omnivorous diets.

The characteristic shape of the skull, “beak-like”, from which the name of Rhynchocephalians (from the Greek “ρυγχος” (rynkos), beak, and “κεφαλε” (kefale), head, hence head shaped like a beak, is due to the particular development of the pre-maxillary bone, that forms the fore portion of the upper jaw, leaning forward like a curved beak and that has teeth shaped like a chisel, similar to the incisors of the mammals. This structure is quite evident in the Tuatara and in some fossil rhynchocephals, less evident in others.

In addition to a series of particulars in the structure of the skull and of the teeth set, the rhynchocephals and especially the sphenodonts differ from the Squamata due to some characteristics of the ribs and for the presence of the “gastralia”. In fact, the ribs display some big hooked processes, that is outgrowths that, heading backwards, connect every rib to the adjacent one. Like in the crocodiles and in many dinosaurs are furthermore present and well developped the ventral ribs, that is the “gastralia”, some bones similar to ribs (however not articulated with the vertebral column) that create a sort of abdominal cage that protects and supports the viscera.

The vertebrae of the sphenodons display the fore face as well as the back one (they are defined amphicoelous, that is with double cavity), such as those of the fishes, unlike those of the other reptiles that show only one concavity.

In contrast to the actual lack of diversities, the order of the rhynchocephals included in the past various families and several genera, that occupied many different habitats, including the aquatic one, with a global diffusion.

After the Jurassic, the presence of the rhynchocephals decreased, until almost its disappearance. 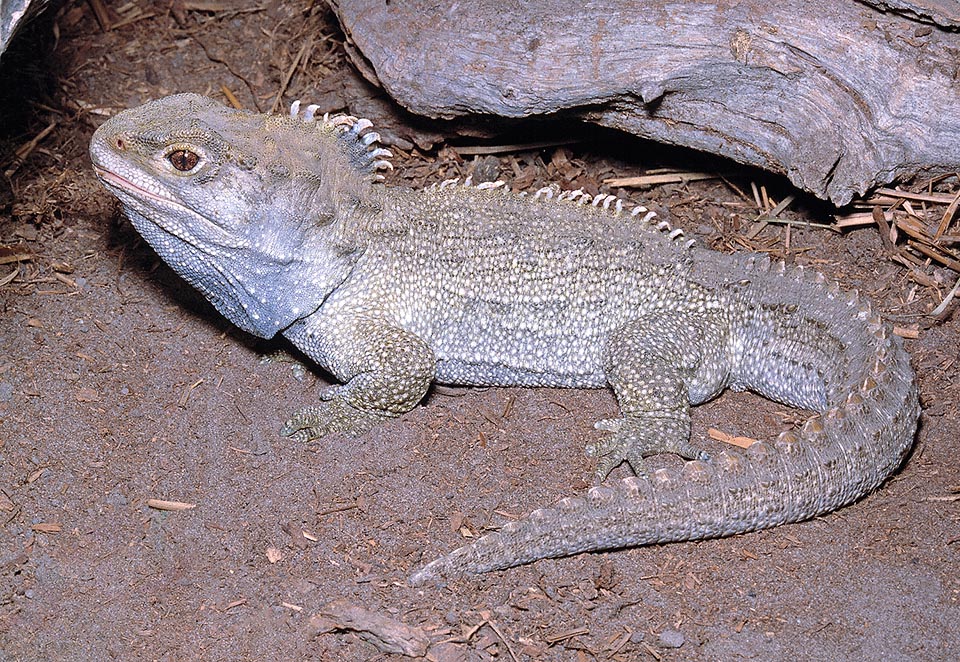 Although Tuatara is considered a “living fossil”, it has been discovered from finds and molecular studies that Rhyncocephals were not a morphologically conservative group but with alternate evolutionary events, as many vertebrates. In Patagonia they kept abundant for long forming the reptilian fauna dominating up to the end of Cretaceous © Giuseppe Mazza

Until not long ago, the paleontologists considered the Rhyncocephalians as a morphologically conservative group, that had met in the time few important changes. The most recent studies, besides proving that the molecular reaction rate of the Tuatara is greater than that of many other vertebrates, reveal that this order of reptils has conquered independently for at least two times the aquatic environment and shows a high diversity in the body proportions, in the structure of the teeth and in the skeletal morphology.

Most of the ecological niches now occupied by the lacertids were once belonging to the rhynchocephals.

Nowadays, more than 40 different fossil species of rhynchocephals are known whose body shape goes from that of a lizard to that of herbivores that were walking on nails similar to hoofs, as is the case of the Priosphenodon or of fast runners equipped with long and slender legs like the Homeosaurus or of armoured forms covered by osteodermal complexes like the Pamizinsaurus, to end with the aquatic forms of the Pleurosaurids, characterized by a notable elongation of the trunk and of the tail that generated a slender and flexuous body probably able to perform movements similar to those of an eel.

The large variety of body structures that appears in the fossils of rhynchocephalians is questioning the once diffused conviction that the decline of this order of reptiles has been caused by an inability of adaptation that rendered them poorly competitive against the squamata and the mammals.