Rosa rubiginosa L. owes Carl Linnaeus ( Mantissa Plantarum Altera, 1771 edition) the valid publication of the name and of the distinguishing features among which the lower rubiginose pagina of the leaflets (with reddish glands); taxon counts fourteen recognized synonyms, of which the most known is  Rosa eglanteria L. and has several common names, such as  Rosa balsamina, Sweet Briar, Eglantine, Églantier odorant and  Eglantina roja.

The eglantine is a symbol of youth that was loved by the English tradition, has been cited by William Shakespeare and reappears also in the sixteenth-century lyric Eglantine of Meriflure (Meriflure perhaps indicates the site of the poem and of the flowers) by Sir Arthur Gorges. The flower has been used as an unveiled homage, as well as an attribute, for Elizabeth I, when the image of the virgin queen, by the portraits and the coins, was intentionally put beside the emblem ‘rose’. In these representations they reproduced it in realistic or stylized ways and at times play the rôle of dynastic reference to the lineage of the Lancaster (red flower) and that of the Tudor (white and red flower). 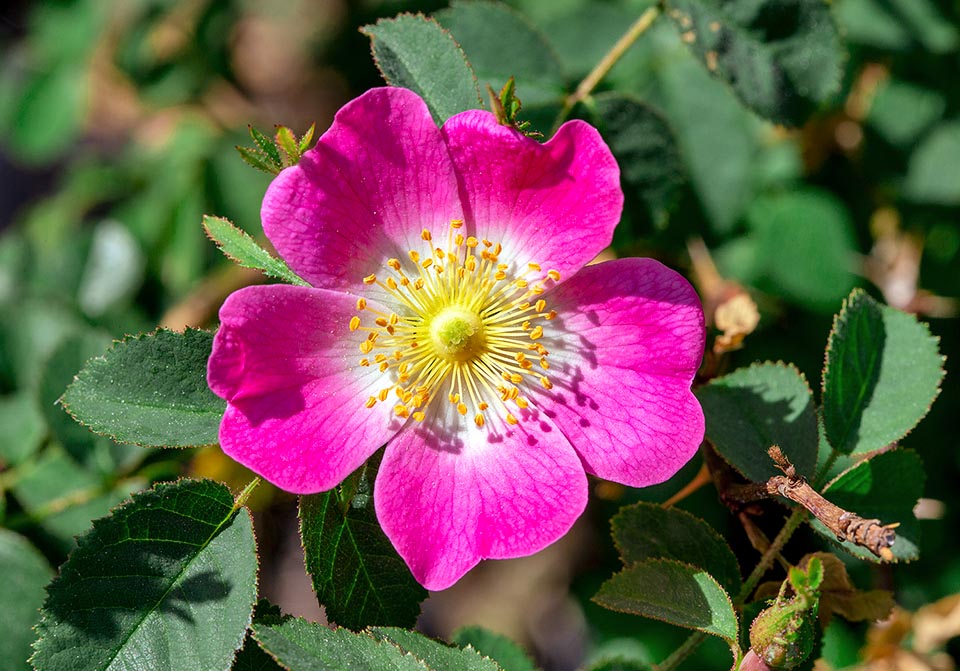 Rosa rubiginosa flower with well evident veined petals and sepals. It’s a shrubby species, strong and compact, up to 3 m tall. In the simple flowers, the outer arc is pink and the central part is white. The leaves have many glands along the edges and on the lower pagina. Rubbed and crushed, especially after rain, they scent apple © G. Mazza

Rosa rubiginosa is a rustic shrub, vigorous, compact and upt to 3 m tall with branches armed with numerous prickles inhomogeneous when old and curved when young and straight; usually the leaves with seven leaflets of forest green colour with yellowish or pink shades are rich of glands along the edges and in the lower surface. To these glands we owe one of the attractions of the plant: the scent of apple that its leaves release if rubbed and crushed, scent that increases after the rain.

The simple flowers are carried solitary as well as in inflorescences, the two-coloured and veined cordate petals have the outer arc pink (more tenuous to more intense) and the part close to the centre, and the nail, white. When ripe, the globose rosehips, more or less ovoid and narrower at the apex, are of scarlet red colour or orange and for a long time are crowned by the sepals. The period of flowering goes from June to late July. 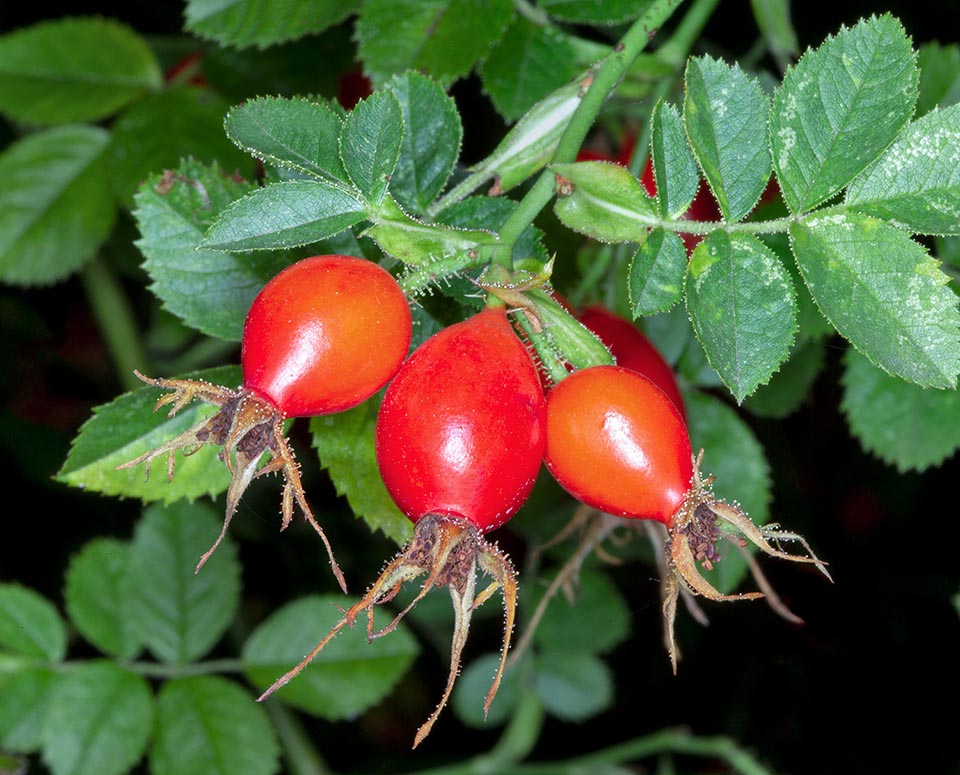 More or less ovoid and narrow at apex, the rosehips, with glandular-bristly pedicels and still persistent sepals, are scarlet red or orange © Giuseppe Mazza

The species is spontaneous in Europe and has been introduced in the Americas, in Australia and in the Cape Province.

Rosa rubiginosa has been amply described and well reproduced by Nikolaus Joseph von Jacquin, in 1773 in Florae austriacae,  vol. I, p. 31 and plate 50.

Rosa rubiginosa tolerates a partial shade, grows on poor soils and is utilized for containment hedges and for ornamental purposes; is famous its employment in Prior Park, the park dominated by a large Palladian style villa dated from the mid-eighteenth, close to Bath (UK).