Rosa spinosissima L. is a rose with a vast range of distribution, spontaneous in Europe (also in Iceland), in Algeria, in Ukraine, in western Siberia and in Xinjiang and has been introduced also in the USA and in New Zealand; its presence is decreasing in Norway. It grows along the littorals and on hills in sandy and rocky soils, in temperate zones it does not exceed 2000 m of altitude.

Linnaeus in 1753 (protologue in Sp. Pl: 481), states that it is covered by aculei, that it has undivided sepals «Rosa caule petiolisque aculeatis, calicis foliolis indivisis» and that by Caspar Bauhin in Pinax theatri botanici (1623, p. 483), it was indicated as a very thorny country rose, with perfumed white flowers. Always in Pinax we find that it was known under various epithets, among which Rosa dunensis (dunensis means living on the dunes) and that it had been represented with the name of Rosa praecox spinola fl. albo in Hortus Eystettensis, the important Bavarian figured herbarium of 1613. Previously, Gerard in 1596 had called it Rosa pomifera, the Pimpernel Rose.

The epithets spinosissima and pimpinellifolia render evident two of the characteristics of these roses: the abundance of aculei and the look of the leaflets recalling those of the Pimpemel or the Burnet. Rosa spinosissima is an erect shrub up to 1 m tall (it reaches rarely the 2 m), with rather short stems, also densely covered by small needles and aculei that may be single or paired, straight and tapering or more or less curved. 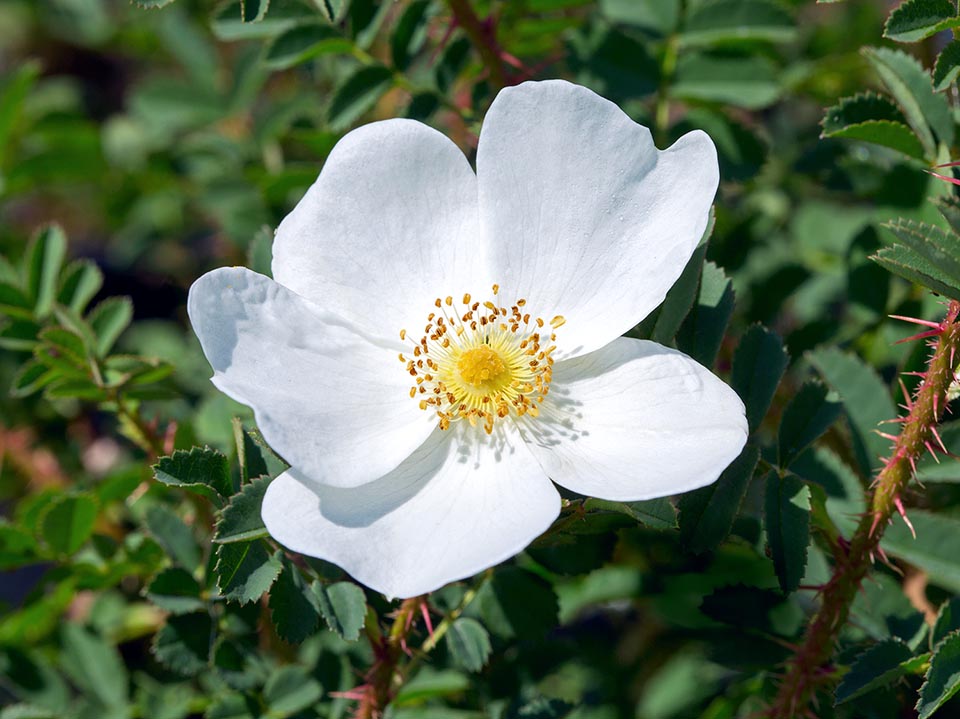 Rosa spinosissima has petals with variously conformed margins and mostly of white colour; these maintain the shell position for a long time and confer the corolla, initially globular, the cup-like appearance. The simultaneous flowering of more roses, close to each other, creates a very decorative effect compensating the lack of inflorescences © Giuseppe Mazza

This heteromorphism of the aculei can be more or less evident. At times, the presence of aculei, needles and mass silk may be even little or abundant, a phenomenon we meet in some spontaneous hybrids where the smaller emergencies are less evident.

The morphological variability is justified by the vast distribution area of this rose. Usually, the flowers are white, but also white with yellowish nail, pink and sulphur yellow. Normally, the corollas are carried single, on usually bristly glandular (but also rare) peduncles, having  no bracts. The styles are more or less emergent from the disk and are not merged. The sepals are entire with acuminate apex and, once blossoming is completed, they straighten with respect to the disk of the hypanthium and are persistent.

The globose or subglobose rosehips with the time become blackish violet or dark brown and when ripe remain erect, their dark and glossy epidermis, usually with sparse but evident emergencies, is a distinctive sign of the species.

The leaves have a variable number of minute leaflets (5-) 7-9 (-11), orbicular to ovate oblong and glabrous with narrow and adnate stipules widening abruptly into dilated and very divergent auricles.

The period of flowering is in May-June but, depending on the climate conditions, it may protract in July; due to the earliness in flowering, Rosa spinosissima has been called also as ‘The herald ‘ of the roses. 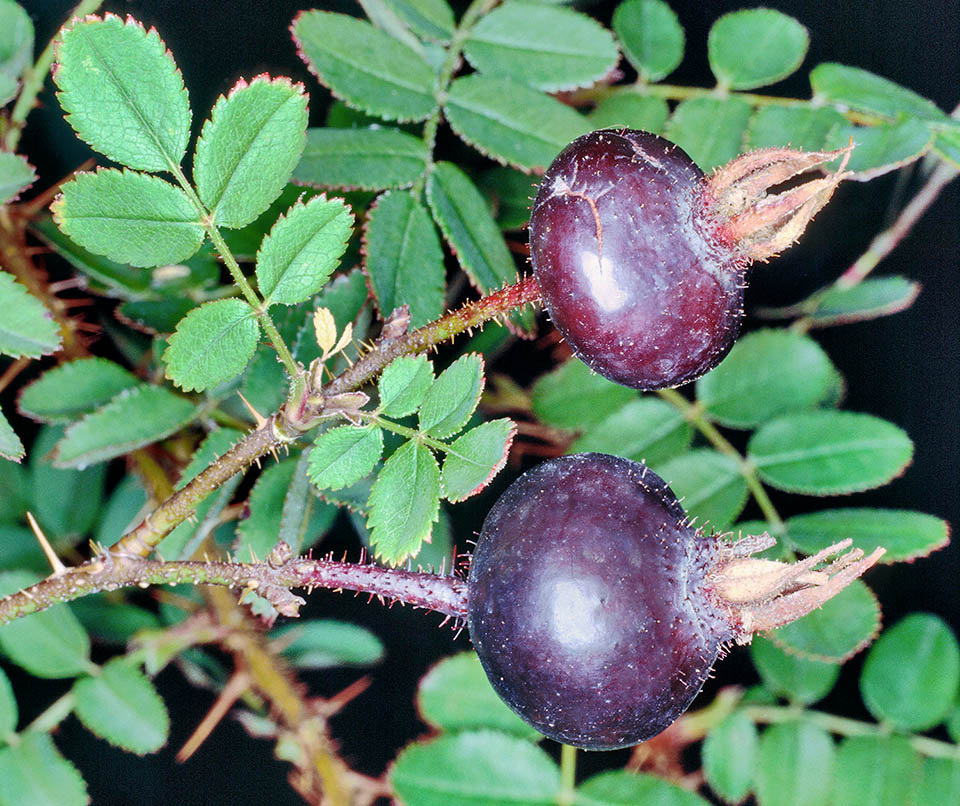 The leaves, glabrous, have well marked margins and a variable number of leaflets,that is minor on the floriferous branches, when old, the straight and tapered aculei are clear, but in phase are red. The false fruits, glossy dark violet, well supported by glandular and bristly peduncles are crowned by the raised sepals © Giuseppe Mazza

Besides its rusticity and the abundant blossoming, the whole ‘shape of the leaves and brownish rosehips’ is another characteristic appreciated as a decorative sign for the landscape gardening and this species, otherwise very variable in its subtaxa and in the more or less spontaneous (colour and duplicature of the corollas) hybrids, is cultivated since before 1600.

Rosa spinosissima has originated several spontaneous hybrids, as was already indicated in  Nouvelle Classification des Roses (1891, p. 22) by the great François Crépin, the most influential voice of Belgian botany and in particular of the genus Rosa, starting from the second half of the Nineteenth century. In particular, have been propagated and cultivated the hybrids formed in the Scottish littoral, of which several ones are considered as natural hybrids; the whole of these cultivated roses is indicated under the generic name of Scotch Roses, or more properly, after some, of Scots Roses. The number of these forms of roses is proved by the fact that nowadays in the literature are found more denominations than the cultivated ones, many of which have double flowers and are variously coloured. In its time, Joseph Sabine, honorary secretary of the Royal Horticultural Society from 1810 to 1830, suggested for the double flowered forms of Rosa pimpinellifolia, according to the colour of the corollas, a subdivision in seven sections, counting twenty-six double Scotch Roses.

Among the  nineteenth-century hybrids, are still now particularly appreciated ‘Harrison’s Yellow’, obtained by George Harison in New York by around the 1824 and ‘Stanwell Perpetual’ (ante 1821), introduced and marketed in England by J. Lee during the Thirties of the XIX century. This last rose, in temperate climates, is able to give some flowers even in December and the beauty of its corollas makes it forget the messy appearance. Rosa spinosissima has also entered the hybridization programmes of Wilhelm Kordes, from which, in 1942, it obtained ‘Fruhlingsmorgen’.