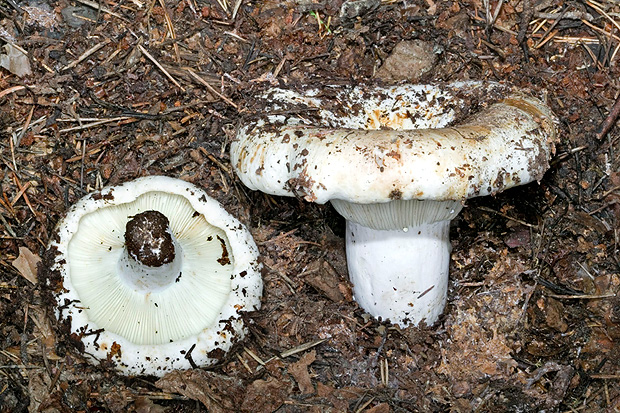 The name comes from the Latin “délicus” = without milk, devoid of milk, due to the absence of latex.

Description of the Subgenus and Section

To the subgenus Compactae are ascribed taxa characterized by firm and compact flesh, dry cap, from white or whitish, initially, to bister brown finally to blackish; smooth margin, not grooved, little inrolled in the young fungus, then straight; hymenophore with numerous lamellulae of variable length. Spore print mostly white, but also cream or yellow. Spores are mostly with non-amyloid supra-hyphal notch.

In the Section Lactarioides are grouped taxa which characterize for the cap, initially convex, then depressed or crateriform, with rough surface, initially white or whitish, then rusty; very short stem and flesh darkening when cut. Spore print from cream to yellow. The spores have partially amyloid supra-hyphal notch.

Cap: 5-15 cm, initially hemispheric, then convex, bun liken umbilicate, finally flattened, depressed up to crateriform or funnel-shaped; margin initially inrolled for long time, then straight, thin, undulated, lobed, not grooved; dry surface, rugged, opaque, also little felted, initially white, then with ochre or brownish dots, almost completely covered by mould and leaves which it traps when it comes out from the soil in the growth. 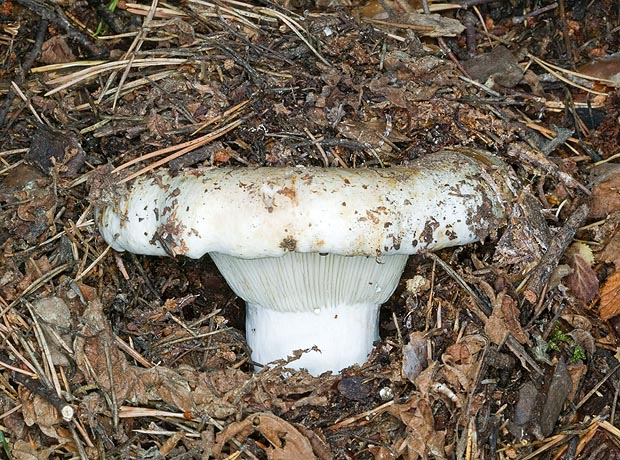 Stem: 2,5-5 x 1,5-3,5 cm, cylindroid, short and stocky, expanded from bottom to top, compact, hard, full, then spongy; the surface is rather pruinose, rugged, white, then with brownish spots.

Flesh: thick, compact, frail, from compact to spongy and often wormy in the stem; white, tends to become brown when cut. Smell of fish, of salt or of fruit, tending to have one prevailing on the other; mild taste on the flesh, somewhat spicy on the gills.

Habitat : it grows in small groups, from spring to late autumn, in latifolious woods as well as in the conifer ones, in calcareous and dry soils.

Edibility: mediocre edible, it is not appreciated due to the poor supply of flavour. We feel obliged to express our personal opinion on the gastronomic value of this fungus, even if we know that it is much sought for and eaten in some zones; however, we realize that this belongs to a gastronomic and cultural tradition worthy of attention.

Remarks. Russula delica is a quite diffused species and common under latifolious trees and also under coniferous ones in calcareous soils, from the Mediterranean to the sub-Alpine zones. 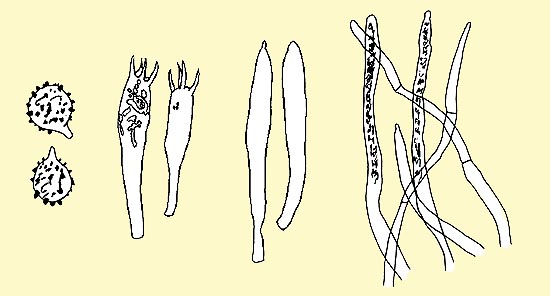 It quite easily recognized due to the rather big size, the spaced and broad gills, the shape of the rather irregular cap, the fruity smell, especially when young, becoming unpleasant in the adult individual and the just peppery flavour.

Other possible confusions may happen with some species of the Genus Lactarius, for the habitus and the colour of the carpophore: Lactarius piperatus (Linnaeus: Fries) Persoon, which, however, has very thick and narrow gills, the stem normally slender, when broken it secretes a thick and white latex; Lactarius glaucescens Crossland, which, however, has thick, narrow gills, cream-whitish suffused of flesh colour, the flesh turning slowly to greyish green, then to intense green, white latex which becomes green when drying; Lactarius vellereus (Fries : Fries) Fries, which, however, has narrower gills, of yellowish cream colour, spotted of brownish cream, flesh with acidulous smell and sour taste, secretes a little abundant latex, white, becoming brownish cream when dries up on the gills.