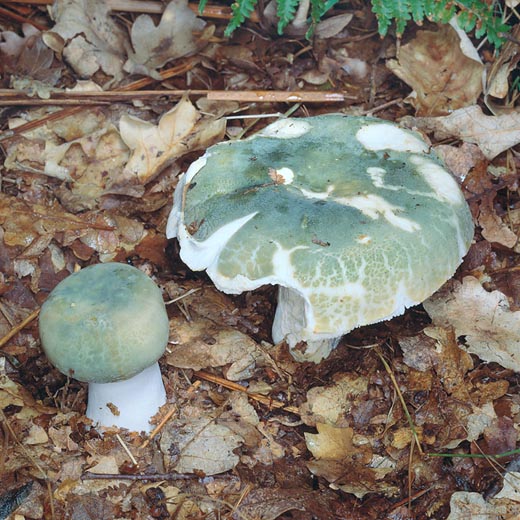 The name comes from the Latin “virésco” = I become green, greenish, greening.

Known all over Italy, so much that it is called in hundreds of different names, of which we cite only a few ones: “colombina verde”, “verdone”, “culumbina”, “colombina macchiata”, “russola verdeggiante”, and many other more. Known, in France, as “palomet”, “russule verdoyante”; in Spain as “gorro verde”, “llora verda”; in English speaking countries as green-cracking Russula, quilted green Russula, green brittlegill; and, finally, in Germany as Grüngefelderte Täubling.

For the description of the Subgenus Heterophyllidia please refer to the text of the Russula cyanoxantha (Schaeffer) Fries.

Following the systematics adopted by Satnari, only one species has remained in the Section Virescentinae: Russula virescens characterized by the green colour of the cap, the spores without amyloid notch and long and narrow basidia.

Cap: 5-12 cm, fleshy, consistent, initially globose, hemispheric, with flattened top and slightly umbilicate, then convex and finally expanded, little depressed, crateriform at times; initially inrolled margin, just a little lithe, then more or less straight, smooth, without grooves but often with deep incisions; the cuticle which separates for about half of the radius, dry, dull, little pruinose at the centre, cracked and areolate, on all its surface, especially towards the margin, the cracks are present also in the quite young specimens; the colour has, since young, green or pale-green shades, with cream, olive-green, olive-grey, green-yellow, spots, darker at the centre, spotted of ochre-yellow. 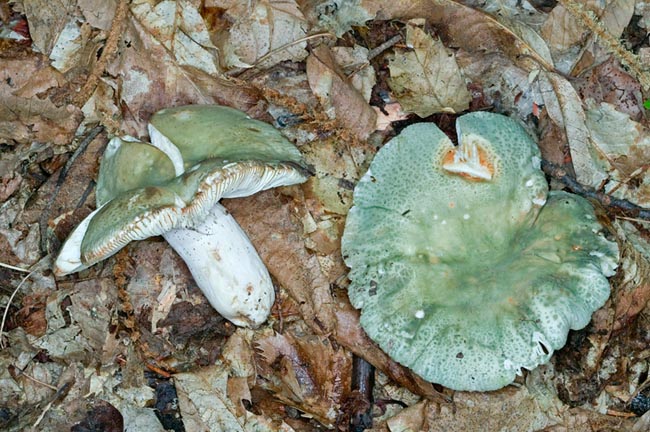 Hymenium: rather thick gills, rounded on the stem, almost free, frail, curved in the young fungus, some forked, interveined, interspersed with a number of lamellulae of various length; white, cream-white, with just a fleshy pink, finally cream, hint, spotted of brown on the lamellar thread and in the eroded parts.

Stem: 4-8 x 1,5-3 cm, cylindroid, attenuated below, ventricose, robust, full then stuffed and by then with rigid but frail bark, pruinose, corrugated, white, with the tip of the base spotted of ochre, when ripe it turns to brown, especially in the parts which have been touched.

Flesh: rather thick, firm, compact, frail, then mushy, of remarkable specific weight, white, it may get ochre shades. The smell, slightly pleasant, becomes displeasing when old, mild taste in all its parts.

Habitat: typical species of the warmth, it grows in summer under latifoliate trees, preferably chestnut and turkey oak, much common in the Mediterranean zones.

Chemical reactions: to iron sulphate, the flesh becomes reddish first then reddish-brown; to the guaiac tincture, it reacts slowly positively; to the Aniline, on the gills, by a negative reaction.

Remarks. Russula virescens is an easy to be determined fungus, characterized by the always dry surface of the cap, velvety; the thick fissures at the centre of the cap, wider and coarse towards the margin; the colour, always with jade green to almond green shades; the fragility of the flesh and the remarkable specific weight; the stem, robust but frail, crooked at times; the pale spore print.

It might be mistaken with the Russula anatina Romagnesi, which, however, is smaller, the colour of the cap goes from ash grey to lead-grey, sometimes paler or just spotted of pale green with lilac shades; the cracks of the cap placed in a discontinuous way and only towards the margin; the sub-lardaceous gills, darker cream, brown spotted when ripe.

The Russula cyanoxantha fo. cutefracta (Cooke) Sarnari, also appears, at least when young, firm and compact, has the cap of olive brown grey colour with big rusty ochre dots at the centre, the fissures, present also in the young fungus, are localized close to the margin and the gills are typically lardaceous.