The species is native to Cuba and Jamaica where it lives in the thickets on sandy and calcareous rocky soils, from the sea level up to about 600 m of altitude.

The etymology of the genus is unknown, having not been specified by the author, the French botanist Michel Adanson (1727-1806); the name of the species is the Latin adjective “maritimus, a, um” = maritime, marine, with reference to the coastal environment where the type species has been found. 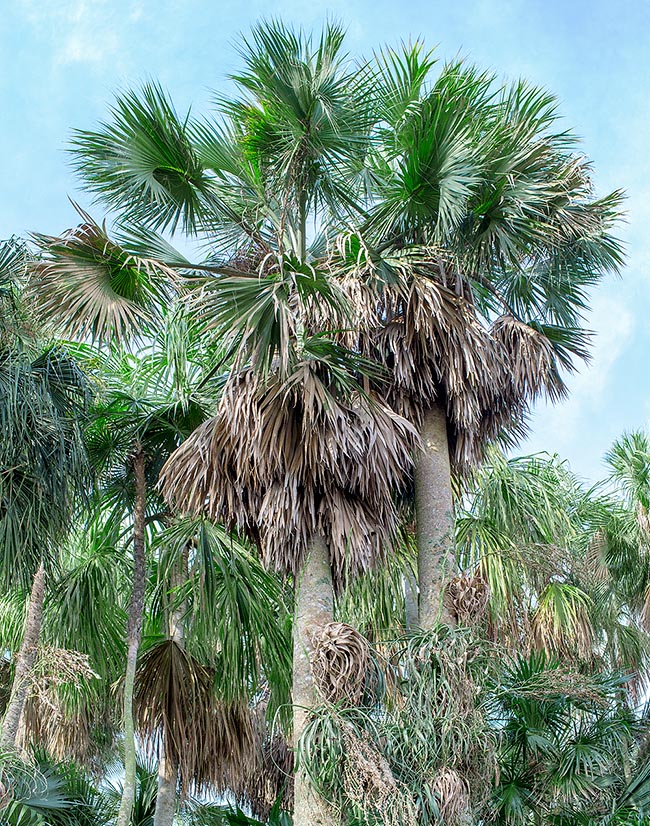 Native to Cuba and Jamaica, the Sabal maritima reaches 18 m of height on a 40 cm stem. It stands the saltiness and short thermal decreases up to -5 °C. The fruits are an important source of food for the avifauna © Giuseppe Mazza

The Sabal maritima (Kunth) Burret (1933) is an unarmed monoecious species with solitary erect stem, up to 15-18 m tall and 30-40 cm of diameter, columnar, covered in the young plants by the residues of the foliar bases forming a typical cross-weave, of greyish color and smooth, but for a short space under the crown, in the adult plants. The leaves, on a 1-1,8 m long petiole covered by tiny deciduous brown-whitish scales, are strongly costapalmate and slightly wavy, divided in 70-100 rigid segments, up to 1,3 m long and about 5 cm broad, merged at the base per 1/3-1/2 of their length, divided in their turn at the apex in two linear-lanceolate segments with long pointed apex, of intense green colour; from the axil of the segments depart whitish filaments. Ascending inflorescences between the leaves (interfoliar) of the same length, with 3 orders of ramifications and rachillae, 4-15 cm long, with close hermaphroditic fragrant flowers of cream white color. Spherical or slightly pyriform fruit, of 0,8-1,4 cm of diameter, blackish when ripe containing only one globose-depressed seed, of 0,5-1 cm of diameter and 0,5 cm thick.

It reproduces by seed, previously kept in water for 3 days, in draining loam maintained humid at the temperature of 26-28 °C, with germination times starting from 1-2 month.

Very similar in appearance to the Sabal causiarum and Sabal domingensis, from which differs due to the ascending inflorescences and the petioles covered by tiny scales, besides other particulars such as the veins of the leaves. Similar are also the uses and the requirements of cultivation, apart a minor resistance to the low temperatures, up to about -5 °C, furthermore bears the saltiness and hence may be employed in gardens close to the sea. The fruits are an important source of food for the avifauna.