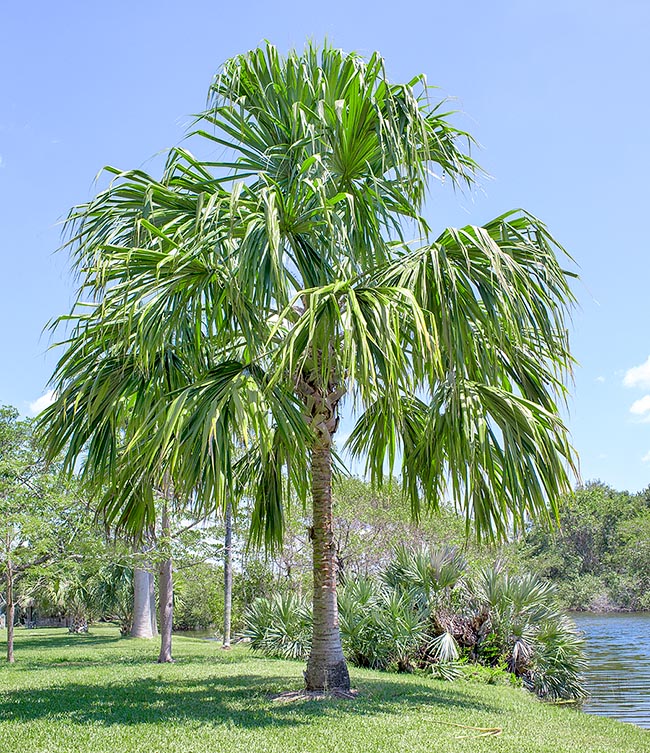 Native to Central America, Sabal Mauritiiformis has a trunk enlarged at the base, reaching the 20 m © G. Mazza

The species is present in Belize, Colombia, Costa Rica, Guatemala, Honduras, Mexico (Chiapas, Oaxaca, Tabasco and Veracruz), Panama, Trinidad and Venezuela where it grows in the humid forests and savannahs on calcareous soils, from the sea level up to about 1000 m of altitude.

The etymology of the genus is unknown, having not been specified by the author, the French botanist Michel Adanson (1727-1806); the name of the species is the combination of the name of the genus Mauritia and of the Latin suffix “formis” = shaped like, with obvious reference.

The Sabal mauritiiformis (H.Karst.) Griseb. & H.Wendl. (1864) is an unarmed species, monoecious, with erect solitary stem, up to more than 20 m tall and of 15-25 cm of diameter, enlarged at the base, of green color in the young plants, greyish brown in the adult ones, marked by the annular scars of the fallen leaves spaced about 15 cm.

The leaves, on a 1-2,5 m long and 3-4 cm broad petiole, are slightly costapalmate, of 3-3,2 m of diameter, incised almost up to the base in 60-150 segments, merged in groups of 2-3, divided in their turn at the apex in two linear-lanceolate segments with long pointed apices often drooping, without filaments, of intense green colour above, glaucous below; triangular hastula (appendage located in the insertion point of the foliar lamina with the petiole) with acuminate apex 6-10 cm long.

Inflorescences between the leaves longer than the same, initially ascending, then arcuate in fruit, with 4 orders of ramifications and tiny whitish flowers, 3,5-4,5 mm long, with trilobate calyx shaped like a cup, 3 petals and 6 stamens. Globose-pyriform fruit, of 0,9-1,1 cm of diameter, containing only one globose depressed seed of about 0,7 cm of diameter and 0,5 cm thick. 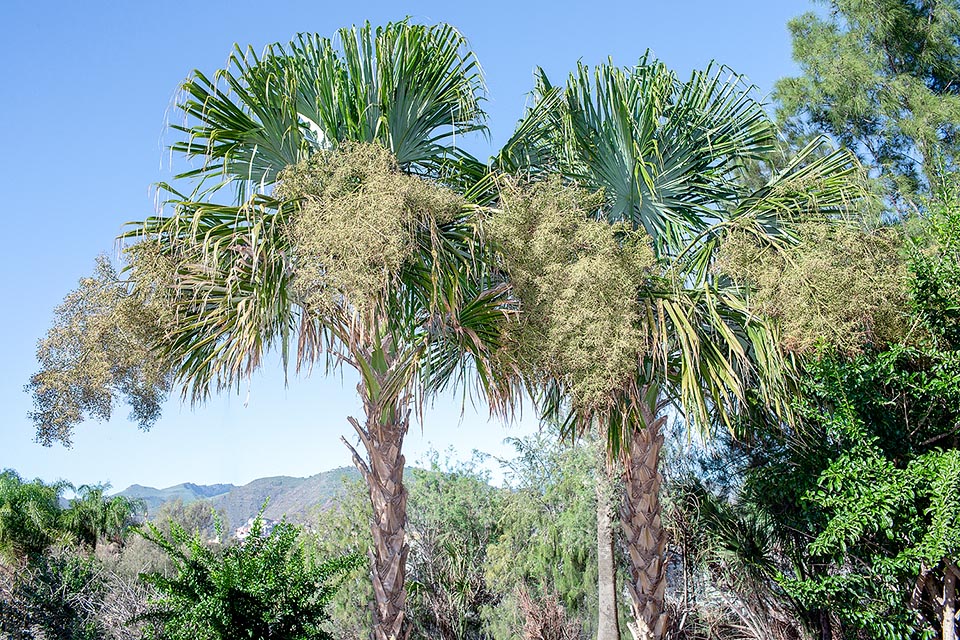 The showy inflorescences, longer than the leaves and initially ascending, bend growing under the weight of 4 orders of ramifications © Giuseppe Mazza

It reproduces by seed, previously kept in water for 3 days, in draining loam maintained humid at the temperature of 28-30 °C, with germination times starting from 1-3 months.

In absolute one of the most ornamental palms due to the thin stems, that keep green for long time, and the big leaves finely etched of glaucous color below; in the context of the genus Sabal it stands among the fastest ones in growing, but the least resistant to the low temperatures, being damaged already around the -3-4 °C. Of great landscaping effect as isolated specimen, in group or rows, requires a partial shading during the first years of life, then the full sun, and draining soils rich of organic substance, slightly acidic to alkaline, maintained almost always humid, even if, when adult, can bear short dry periods, furthermore it tolerates quite well the salty winds. 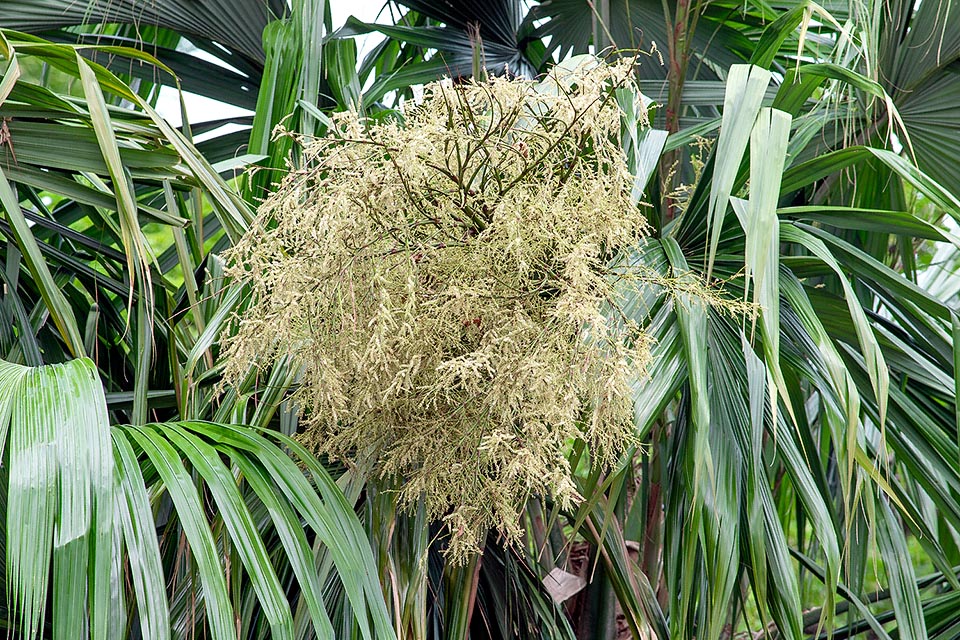 They bear countless bisexual tiny 3,5-4,5 mm flowers with trilobate cup-shaped calyx, 3 petals and 6 stamens. The leaves once used as cover for the rural houses; now serve for the handicraft and exotic tourist structures. The seeds are an important alimentary source for the avifauna that contributes to the dispersion of the seeds © Giuseppe Mazza

Yore, the adult leaves were much appreciated as covers for the rural dwellings, for their long duration and resistance to water, and the young leaves for the interweaving works, whilst the stems, resistant and lasting, were employed in the constructions and for fences. With the increase of tourism, there has been a revival of interest and of requirement for the leaves to utilize in tourist structures and the realization of handicrafts and artistic objects that represent then a source of income for the local populations. The fruits are an important food resource for the avifauna that contributes to the dispersion of the seeds.