The species is native to Belize, western Cuba and Mexico (Campeche, Quintana Roo e Yucatán) where it lives in the tropical semideciduous forests, savannahs and open areas on calcareous soils at low altitudes.

The etymology of the genus is unknown, as it has not been specified by the author, the French botanist Michel Adanson (1727-1806); the specific name is a corruption of one of its local names, jata, used in Cuba. 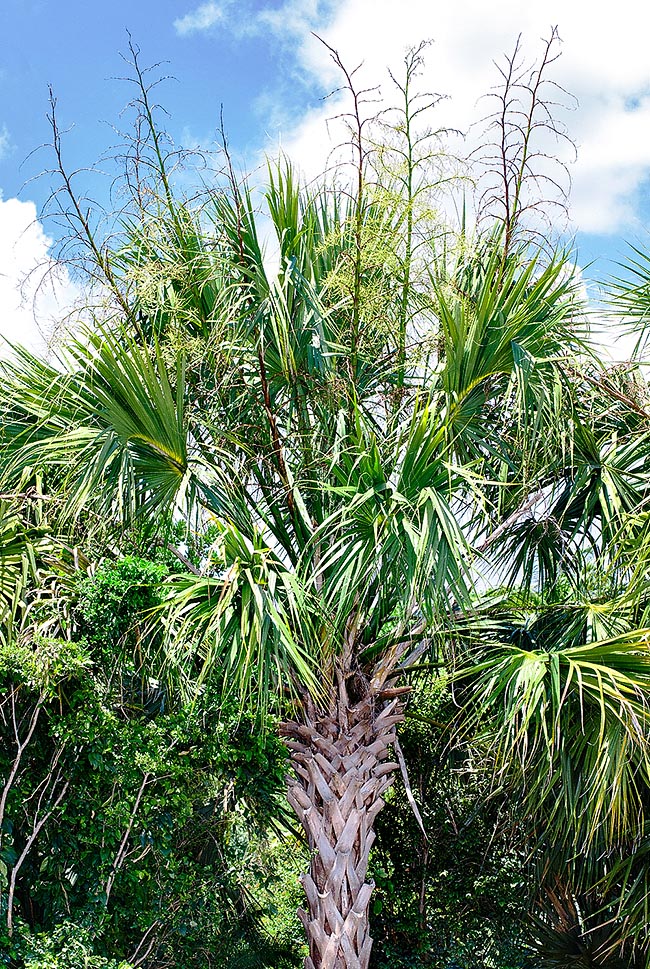 Native to Belize, western Cuba and Mexico, the Sabal yapa can reach the height of 25 m. Inflorescences longer than the leaves. The Mayas utilized it to cover the constructions and in the traditional medicine for various pathologies © Giuseppe Mazza

The Sabal yapa is an unarmed monoecious species with solitary erect stem, up to 25 m tall and 15-25 cm of diameter, of greyish brown colour marked by the annular scars of the fallen leaves, covered in the young plants by the residues of the foliar bases.

The leaves, on a 1-2 m long and 2,5-3,5 cm broad petiole, are costapalmate, irregularly subdivided in 90-110 linear segments with bifid apex united in groups of 2, rarely 3, merged at the base per about half of their length, groups in their turn divided almost up to the base, up to 1,5 m long and 2-3 cm broad, of uniform green colour; triangular hastula (appendage placed in the point of insertion of the foliar lamina with the petiole) with acuminate apex 4-7 cm long.

Inflorescences between the leaves longer than the same, erect, with 3 orders of ramifications and flowers, 4-6 mm long, with slightly trilobate campanulate calyx, 3 petals united at the base and 6 stamens.

Globose-pyriform fruits, 1-1,2 cm long and of 1-1,3 cm of diameter, blackish brown when ripe, containing only one globose-depressed seed of 0,6-0,9 cm of diameter and about 0,5 cm of thickness.

It reproduces by seed, previously kept in water for 3 days, in draining loam maintained humid at the temperature of 28-30 °C, with germination times starting from 1-3 months. Generally similar in appearance to the more diffused and cultivated Sabal mauritiiformis, but with segments just more rigid and less incised, and of analogous cultivation exigencies, with a slightly better resistance to the low temperatures, up to -4/-5 °C, and to drought.

In addition, the utilizations in the constructions and in the artisanship made by the local populations are the same since remote times. Moreover, among the populations Maya various parts of the plant were utilized in the traditional medicine for various pathologies.