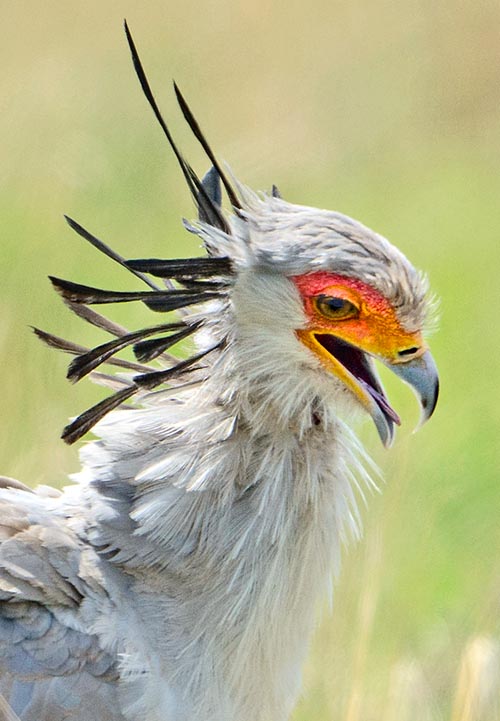 Sagittarius serpentarius gets the name from its head black feathers © G. Colombo

The classification of this unusual bird with very long bare legs, eagle-like beak, vulture-like short fingers and behaviour by sure not to be found amongst the common diurnal raptors, has placed in the past major hesitations about its classification. Even if related due to many matters to the cranes (Gruidae), to the Bustards (Otididae), to the Seriemas (Cariamidae), to the Vultures (Cathartidae) and to the Hawks and Eagles, since ever it has been placed in a specific family which should distinguish it neatly from all these particular resemblances.

Its scientific name fits it perfectly inside the world of the avifauna, even if with different and imaginative interpretations about the etymology of the term.

Sagittarius from the Latin “sagitta” = arrow, derived from its way of walking while looking for food.

After Vosmaer, 1804, it’s a continuous change of direction as if it should assume a new position on the battlefield, typical of the archers of the old armies who were seeking the best position for throwing their arrows. Therefore, “sagittario” = archer. Others, conversely, would see it as derived from the long and hanging from the head black feathers, similar to arrows placed in a quiver.

From this interpretation should come then the vulgar term of Secretary bird, as this drooping crest would resemble those quill pens the employees of yore tucked lazily on the ear during the work breaks. While someone else should derive it from a French deformation of the Arabic epithet “Saqr-et-tair” = hunting bird, become, later on, “secrétaire”.

Much more apparent is the meaning of serpentarius from the Latin “serpens”, serpentis” = serpent, its choice prey.

The common names follow these different meanings. In English Secretarybird, in French Messager sagittaire or Secrétaire, in German Sekretär, in Spanish Secretario, in Kiswahili Varani tamba, in Afrikaans Sekretarisvoël, in Italian Segretario or Serpentario. 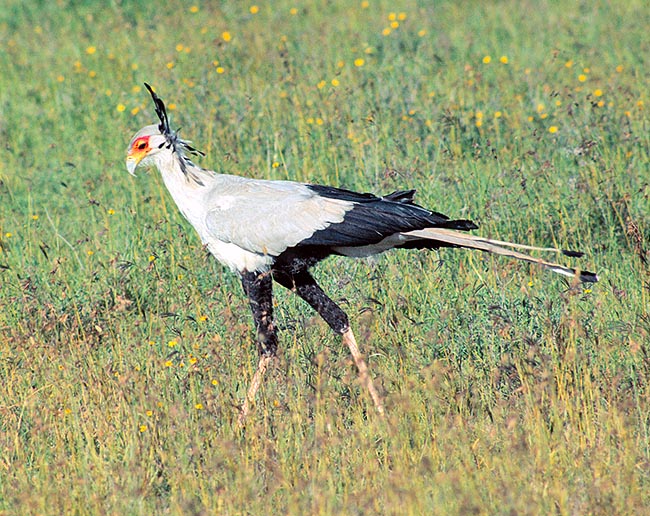 The long armoured legs defend it from the snakes bites, its choice food © Giuseppe Mazza

It s a much loved bird in South Africa because of its merciless hunting to animals considered as animals harmful for the population, activity in which it is highly specialized.

It appears in the national emblem of Sudan and in South African President’s coat of arms. In this nation it is friendly called “Devil’s Horse” due to the merciless hunting it performs against mice and serpents.

The Secretary bird is purely African and is amply present almost all over the Continent. Its home range goes from the sub-Saharan stripe which goes from Senegal up to Ethiopia and southwards, up to cover the whole South Africa, systematically avoiding the areas of forest and the clearings covered by thick vegetation.

It is the typical inhabitant of the African grassy moors, where it is seen while restlessly walking in search of food and emerging thanks to its elegance, due to its remarkable stature, in the high vegetation of the savannah. It is a sedentary bird but often performs movements related to the rains and the seasonal fires of the bush. The adults are reluctant in abandoning their areas even in the post-nidification period whilst the juveniles perform a regular nomadism looking for new spaces to occupy. 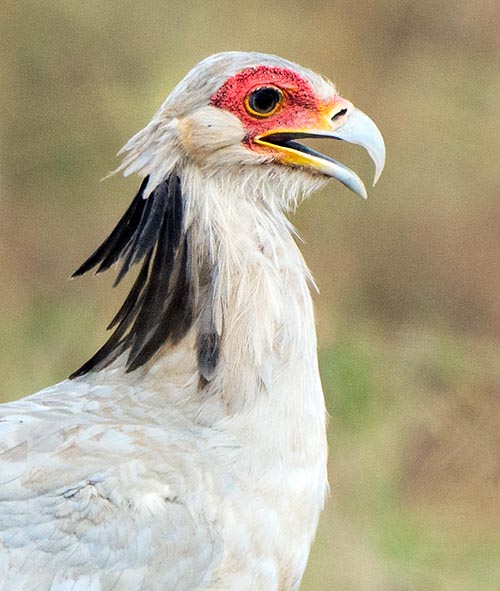 Even if anomalous, it's fully a raptor © Gianfranco Colombo

While hunting it is usually solitary even if it is often seen accompanied by the partner which is however kept at a distance as if they were raking together the area they are crossing. It is an excellent and tireless walker and can cover each day, tens of kilometres at an average speed often exceeding the 3 km/h.

It fiercely defends its home range and does not hesitate in attacking even groups of eagles (Aquila rapax and Aquila nipalensis) when these seize preys inside its territory. The adults practically do not have enemies whilst the young are subject to predation by the hawks, kites and night raptors.

The Secretary bird is a large bird as can reach the length of 150 cm, the 4 kg of weight and a wingspan of more than two metres. It has very long pinkish legs allowing it to skilfully walk into the high grass of the savannah and in the meantime to defend from possible bites or attacks by the preys it usually catches. These legs are covered by thick and hard scales so much to render them insensitive to the bites of the serpents of other seized animals.

Having exclusively terrestrial habits, it often prefers to run away when facing dangers, running fast rather than flying away even if, when flying, is a very good glider and is able to exploit wonderfully and elegantly the thermal currents, reaching quite remarkable altitudes, even up to 3500 m. When flying, it has a characteristic silhouette rendering it unique from any other bird. The contrast between the greyish white and black colour of the wings, the neck very elongated from the body, added to two vey long feathers projecting from the centre of the tail, are its evident characters.

The body is greyish with intense black flight feathers and trousers. Seen from far away under the vivid tropical sun, it is a classical white and black bird and easily mistakable with a stork of with a crane. It has long neck and head with bare orange cheeks in the adults and yellowish in the juveniles. It has the typical beak of the raptors, much hooked, and bluish. 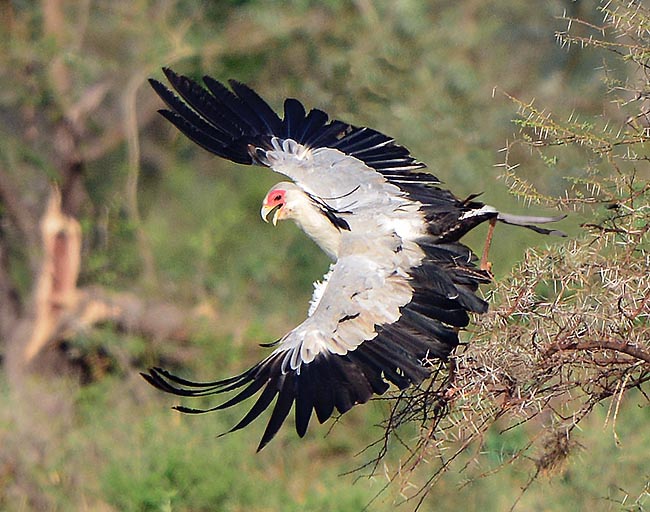 On the nape it has a dozen of flat and tapered black feathers, 10 to 20 cm long, hanging down on the wings and continuously waddling moved by the wind or by the swinging of their gait.

Finally, it has very strong feet, equipped with powerful big nails used to trample, kick and stun the preys it eats.

There are no visible distinctions between the sexes even if the female results slightly bigger. It is a usually silent bird apart when pushed to declare its presence or to defend its territory from the invaders. It emits a short hoarse sound of low intensity.

The pairs are territorial and occupy an area which may extend up to 40 square kilometres. They nest on acacias or on not tall bushes, usually very spiny and unreachable from the ground.

As a matter of fact, they do not love woody zones, where the vision for who stays on the nest is limited by obstacles or by bushes but prefer plants isolated and located in places from where they can dominate much of the territory they occupy. The nest is a mass of branches, foliage and grasses put in bulk on the top of these trees to form an ample platform covering them totally. 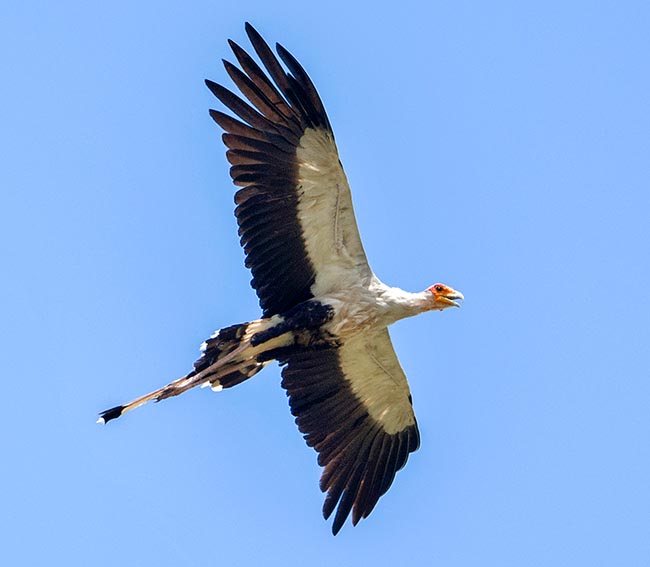 The nidification is done during the whole year depending on the availability of food and usually the flying away of the young coincides with the abundance of preys present during the rain period.

At times, during the times of great abundance of preys, they may repeat the nesting even after very few weeks from the last fly away.

They usually lay two eggs which they incubate for about 45 days and the young fly away after 100 days. Usually all the members of the brood are able to take the flight, cared and assisted by both parents during the hatch as well as during the growth.

Their diet is extremely varied but with some preferences. They love to seize serpents, rats, big insects, frogs and rodents, eggs and nestlings but often also small rabbits, mongooses, ground squirrels and porcupines. The prey is normally at first stunned with a powerful kick, then held with the powerful taloned fingers and, at last, savaged with the strong beak. The prey is gobbled whole.

It is easily bred in captivity becoming a rather meek bird even if, in the wild, it does not show such a virtue. It is traditionally revered by the man due to the benefits given by the catching of reptiles and rodents and in many African nations enjoys of ample protection. It is a protected bird but is not considered as endangered and therefore is classified in CITES II. 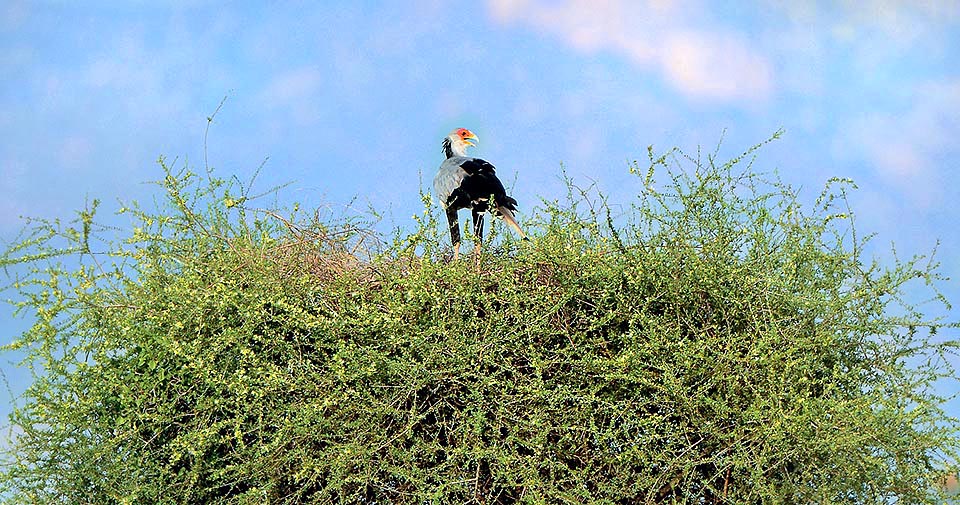 The nest s a mass of branches, leaves and grass, put in bulk on top of isolated and dominant plants, to form an ample platform © Gianfranco Colombo