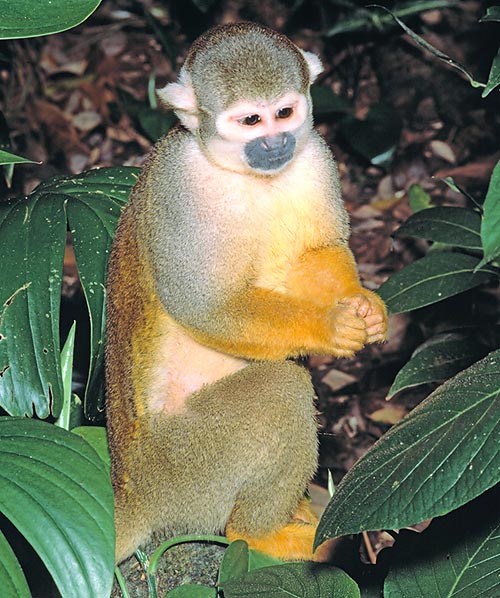 The Saimiri sciureus rarely moves on the ground © Giuseppe Mazza

The genus Saimiri, synonym of Chrysotrix (that is, with golden hair), includes a certain number of monkeys belonging to the parvorder of the Platyrrhines (Platyrrhini), family Cebids (Cebidae).

We shortly remind that the parvorder in the taxonomic Biology is a classification level lower than that of the infraorder and over that of the family.

These charming monkeys have always a coat with a wonderful tawny golden colour.

The squirrel monkeys are spread, with some ten species in the pluvial tropical forests of Venezuela, Colombia, Panama, Peru, Ecuador and in Bolivia in the Amazon Basin.

The most known and most studied species in the wild by the biologists is the Common squirrel monkey (Saimiri sciureus Linnaeus, 1758).

It is also called Squirrel monkey, Barizo or Death’s head, due to the presence of the white small mask of hairs on the muzzle, which vaguely reminds a human skull.

The denomination “squirrel monkey” comes, on the contrary, from their small size, the big tail and the extreme agility characterizing them, most valuable elements for moving in the thickness of the canopies of the trees in the pluvial forest.

The Common squirrel monkey lives in the South American humid tropical forests, close to the great rivers. It is found also in the Mangrove forests (areas where are present associations to Mangroves), in the part of flooded forest and of gallery forest. In all these environments, it prefers the arboreal life. 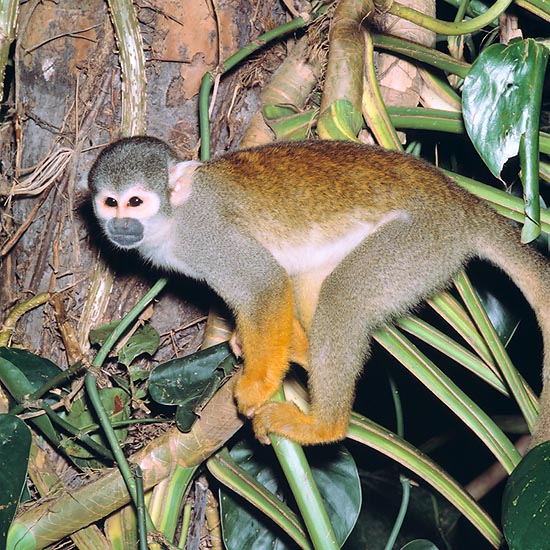 Various are the anatomical characteristics peculiar of this genus, so much that the zoological biologists are not at all in agreement about the place assigned it in the classification, even if always inside the family of the Cebidae.

As a matter of fact, some authors see the squirrel monkeys as close to the aotines, others to the pitheciines, and others to the callimiconini, but nowadays, most of the zoologists place them close to the real capuchins. In the specific, the Saimiri sciureus, has a maximum length of 80 cm, 50 cm of which concern the long tail. The males weigh 0,7-1,1 kg, whilst the females reach the 0,75 kg at most.

The head is very small, with big ears dotted of white, the ocular sockets are very close each other, separated by a bony crest, so much thin to look almost membranous. The eyes are quite big, of an intense burnt brown-black colour and very sweet.

In relation to the skull, they have a really developed brain in terms of volume; as a matter of fact, its mass, compared to that of the rest of the body, is placed in an allometric ratio varying between 1:17 and 1:12, bigger than what observed in the man.

But a bigger encephalic mass does not necessarily imply a greater intelligence (please see texts Serpentes and Primates), and in fact that of the Saimiri sciureus is quite modest, if compared to the capacity of anthropoid apes such as the Common chimpanzee (Pan troglodytes) or the Bornean orang-utan (Pongo pygmaeus). 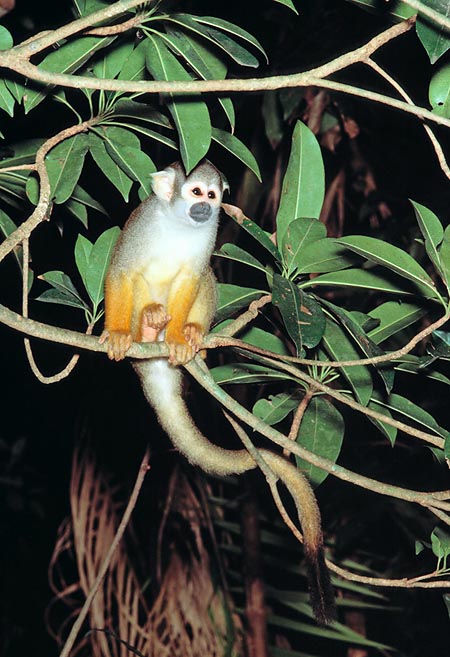 The tail is longer than the body, but poorly prehensile © Giuseppe Mazza

This is because the massive brain is pretty primitive, almost devoid of cervical convolutions, with low neurological development.

With a quite slender structure, with slender and agile limbs, rather elongated head (dolichocephalic), long tail, this monkey has a not thick coat, somewhat rased, with a not uniform brownish or reddish gold tint. The face is white, but the tip of the muzzle, which is black, whilst the big ears, white and hairy, have almost always thick tufts of hair.

These monkeys, in their biotopes, often organize also in quite crowded troops, and it is not rare to see them while performing each sort of acrobatics and evolutions between the branches.

During their pirouettes, the tail, partially elongated, is utilized as a rudder, whilst, when resting on the branches, it is wrapped around some support, even if its modest prehensility does not allow to carry the weight of the body.

The Saimiri sciureus is of exclusively diurnal habits. It nourishes mostly of fruits, sprouts and insects, but also of eggs and of nestlings, which it may find between the foliage of the trees.

It is a monkey with a quite wary temper and with an extremely shy nature.

These cebids rarely approach urban locations or villages, revealing their presence only with very acute cries, which they usually emit especially by dawn and dusk.

They are hunted by the natives not so much for food, because the flesh of these monkeys are little tasty, but for commercial purposes. The Saimiri sciureus are in fact much sought for, unluckily still nowadays, by the traders who sell them to the tourists as companion animals.

The CITES and the IUCN, in cooperation with the local governments, absolutely forbids their trade for commercial purposes. Actually, these monkeys become attached to their master and never give signs of irritation; their only flaw is to emit sharp cries or to complain by the least contrariness. 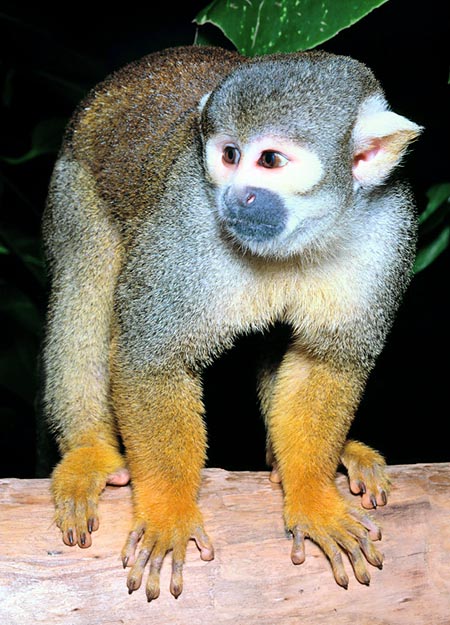 The brain is big but primitive, with few convolutions © Giuseppe Mazza

They require high temperatures and humidity, the absence of which may cause their demise either in captivity or in the wild.

If above conditions are maintained, they may live, when in the wild, up to 15 years and in captivity even up to 30-32 years.

The males of squirrel monkey are polygynous (a form of polygamy where a male mates indiscriminately with the largest number of females in oestrum), during the mating season, which falls between September and December.

They do not form a harem, but inside the groups, during the mating time, the females synchronize the beginning of their oestrum (which lasts three days, whilst the complete reproductive cycle lasts three-four weeks), in such a way to be in heat all at the same time.

By that time often happen furious struggles between the various males and the winner will be able to copulate with the largest number of females. The deliveries are single, and there is, among the females, a strong and sophisticated form of homo and alloparental cares, whereby often the mothers leave their cub to other females when they get away for feeding.

These surrogate and temporary mothers, will take care, protect, play, clean and nurse the cubs till when the biological mother is back.

Sub-adult males and females, after having been weaned when 6-7 months old, by the age of one year will join the sub-adults groups, inside the gathering.

As a matter of fact, also when the sexual maturity is reached (by about three years for the females and four for the males), both females and males rarely quit their own flock, as they prefer to perpetuate the generation and the biological cycle inside the group, with consequent numerous consanguineous crossings.