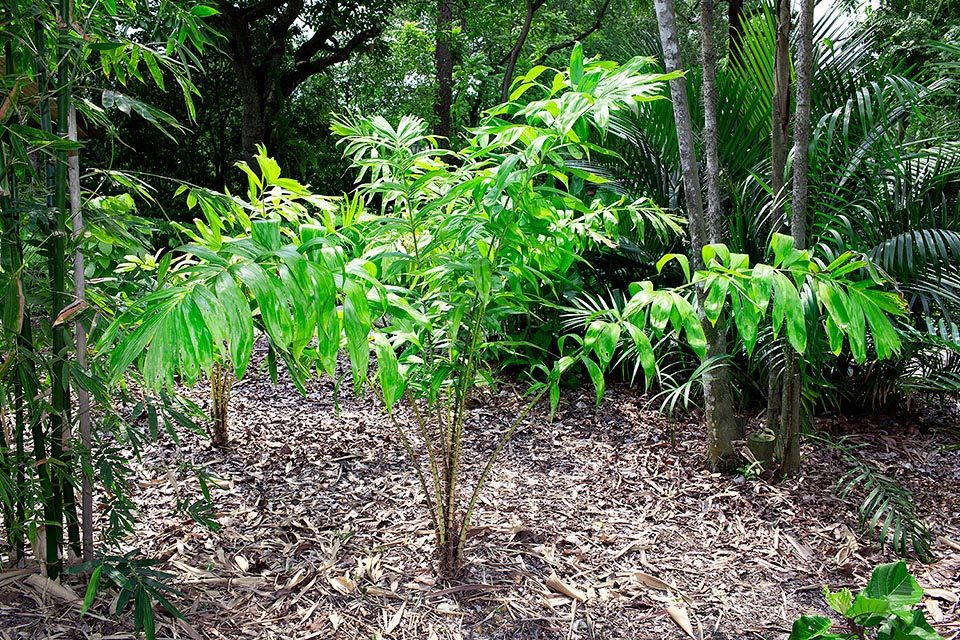 Salacca affinis Griff.  is distributed in the Malay Peninsula in Borneo and Sumatra, in the underwood of the pluvial forests, especially near swamps and ponds.

The name of the genus Salacca comes from the common name “salak, zalak” used in Malaysia to indicate this type of palm. The specific name affinis comes from the Latin “ad finis”, at the boundary, and refers to the resemblance with the congener species Salacca zalacca. Common names: red salak, red snakefruit salak (English); buah ridan salak, linsum (Indonesian); salak hutan (Malay).

Salacca affinis is a dioecious, acaulescent and cespitose species, forming great tufts richly armed with long spines. The stems are underground or are creeping, but can also grow up to 1-2 m. 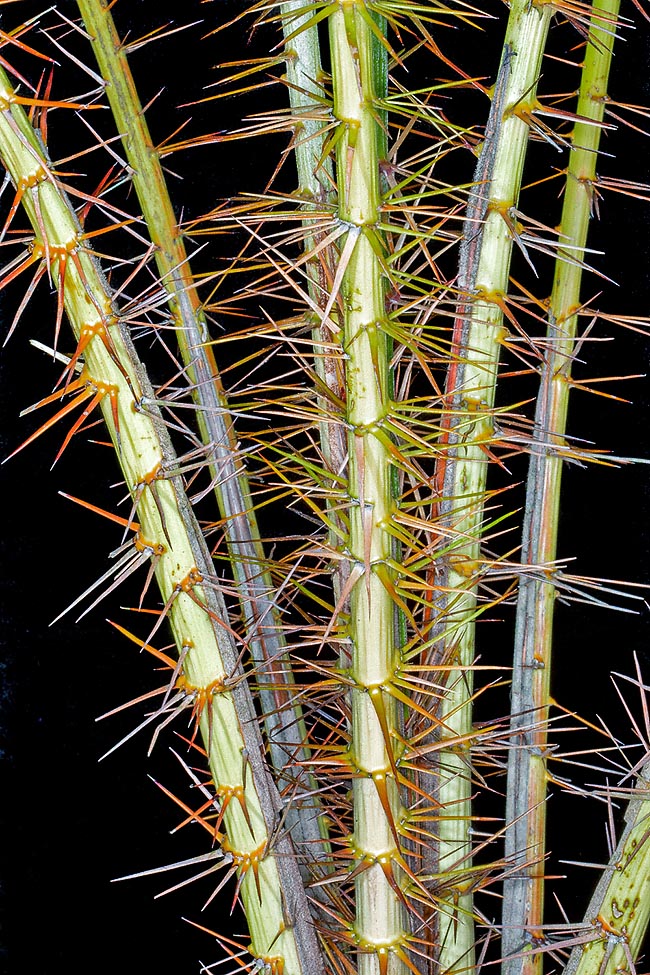 Usually the stem is underground or creeping, but in some old specimens can be 1-2 m tall. The up to 1 m long petioles are rich of solid spines, yellow-orange or brown, that can also reach 10 cm in length © Giuseppe Mazza

The leaves are carried by great and thick petioles, up to 1 m long, covered by yellow-orange, at times brown, spines, up to 10 cm long, in groups of 2-4, densely distributed all over the length of the petiole.

They are pinnate, 2-4 m long, with the rachis covered by spines as those of the petiole, irregularly arranged. The pale green pinnulae are grafted in groups on the rachis in planes in respect to the rachis itself, circumstance giving the leaf a featherly look. The pinnulae, up to 60 cm long and even 6 cm broad, are lanceolate and drooping. The last ones, on the top of the rachis, have toothed, almost torn, extremities.

Salacca affinis presents axillary inflorescences, subtended by leafy bracts. The male ones are 50-100 cm long, ramified, armed with elongated and flattened spines bearing male flowers on cylindrical rachillae shaped like an ear, 4-6 cm long. The female inflorescences are shorter, up to 5 cm long, ramified with female flowers borne on rachillae, always shaped like an ear, up to 3 cm long.

Salacca affinis has egg-shaped fruits, 8 cm long and 4 cm broad, tapered in both extremities, of red colour when ripe, with smooth and flat scales, recalling the skin of a snake, hence the common English name. The fruits, containing up to 3 seeds, take form often at the centre of the plant and therefore are difficult to reach due to the abundance of surrounding spines. They are edible and sweet, though having a sour aftertaste, especially, if compared to the fruit of the congener Salacca zalacca.

It reproduces easily and quickly by seed, that has a germinability very limited in the time, usually 15 days, on a warm humid bed at temperatures of or over 21 °C. It can be multiplied also by division of the tufts, but less easily than by sowing.

Salacca affinis is a species rarely cultivated outside its origin zones. The long and strong spines discourage its cultivation in parks, gardens and passage zones, it is consequently difficult to find them out from the botanic gardens. Also the cultivation for feeding purposes in the origin sites is limited due to the minor quality of its fruits compared to those of Salacca zalacca.

It can be cultivated only in the tropical and subtropical warm zones, where the temperature never goes down under the 20 °C, if not occasionally and for very short periods. In literature are reported experiences of cultivation where specimens of this species survived to the exposition to temperatures close to the 5 °C, however getting serious and important damages to the vegetation. 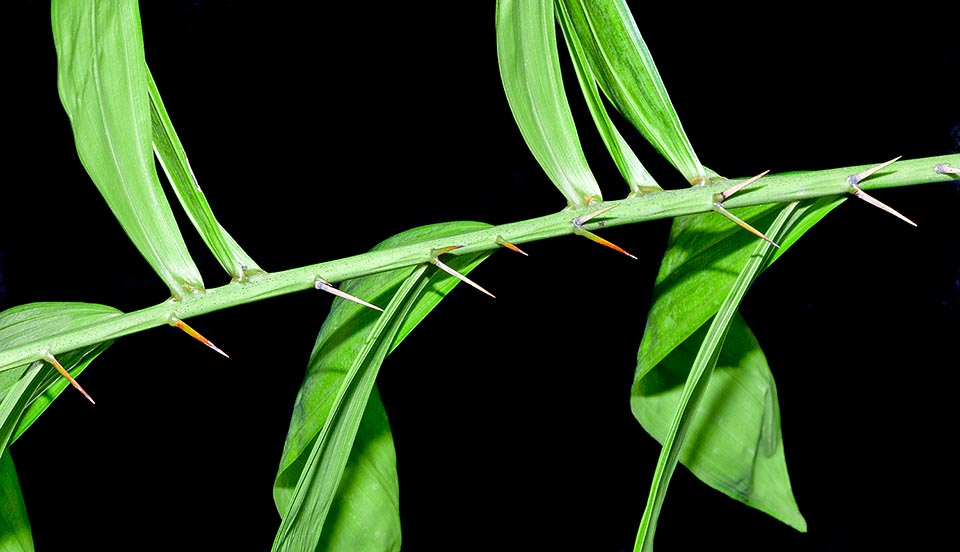 Also the rachis is spinyand the pinnylae, grafted on various planes, grant the leaf a featherly look © Giuseppe Mazza

It prefers positions in half shade and with high values of humidity, sheltered from the winds, in zones with an annual rainfall of more than 1500 mm. It needs high availability of water, and grows well on soils rich in organic substance and well drained, slightly acidic or, at the most, neutral.

To Salacca affinis is assigned the status of “not evaluated” risk, rightly not evaluated by the International Union for the Conservation of Nature (IUCN). In 2011 this species was rediscovered in Singapore, where it was thought to be  extinct, in the marsh forest “Nee Soon Swamp Forest”.