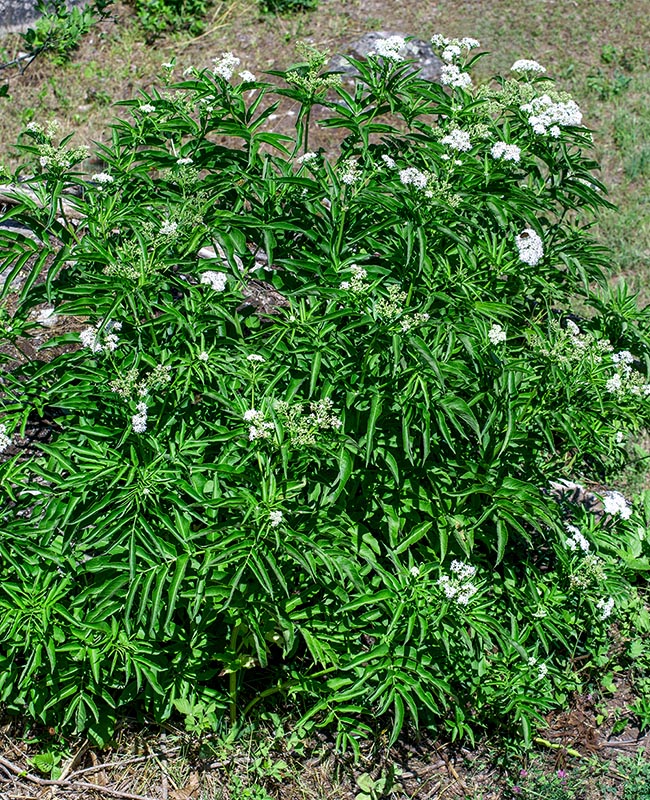 Native to southern and central Europe and south-western Asia, naturalized in North America, Sambucus ebulis is a perennial herbaceous species reaching the height of 2 m, with a long creeping and ramified rhizome © G. Mazza

Sambucus ebulus L., commonly known as dwarf elderberry, walewort, elderwort, or danewort, is native to southern and central Europe and to south-western Asia, naturalized in many parts of northern America.

It is found in several habitats that may be sited close to cities, roads, railways, woods, rivers. At times it behaves as an infesting plant, particularly in the abandoned fields up to 1500 m of altitude.

Yore, the species belonged to the family Caprifoliaceae, but after genetic testing, it has been located into the new family Adoxaceae.

The genus “sambucus” is the name of the danewort used by Pliny the Elder and by Lucius Junius Moderatus Columella.

It comes from the Greek “σαμβύκη” “sambúke”, sambuca, a stringed musical instrument made of elder wood, the specific epithet, “ebulus”, is the Latin name of this plant as reported by Virgil, Pliny and other Authors.

S. ebulus is a perennial herbaceous species having a long, creeping and ramified rhizome. It grows up to 1-2 m of height and has erect herbaceous stems with clear longitudinal veins, usually not ramified, grouped together.

The leaves, emitting a fetid odour, are opposite, imparipinnate, 15-30 cm long, formed by 5-9(-11) leaflets with serrate margin, dark green and glabrous above and pubescent and ciliate in the lower pagina.

The stipules are similar to leaves, well developed, ovate or subrotund.

The inflorescences are corymbs of 10-15 cm of diametre, facing upwards even after the fruitification, formed by numerous flowers (usually, 200-250).

The flowers are pentamerous, actinomorphic, pedunculate, with calyx reduced to a short tube with 5 toothlets and white corolla, occasionally pink, formed by a short conical tube and a hem divided in 5 laciniae. 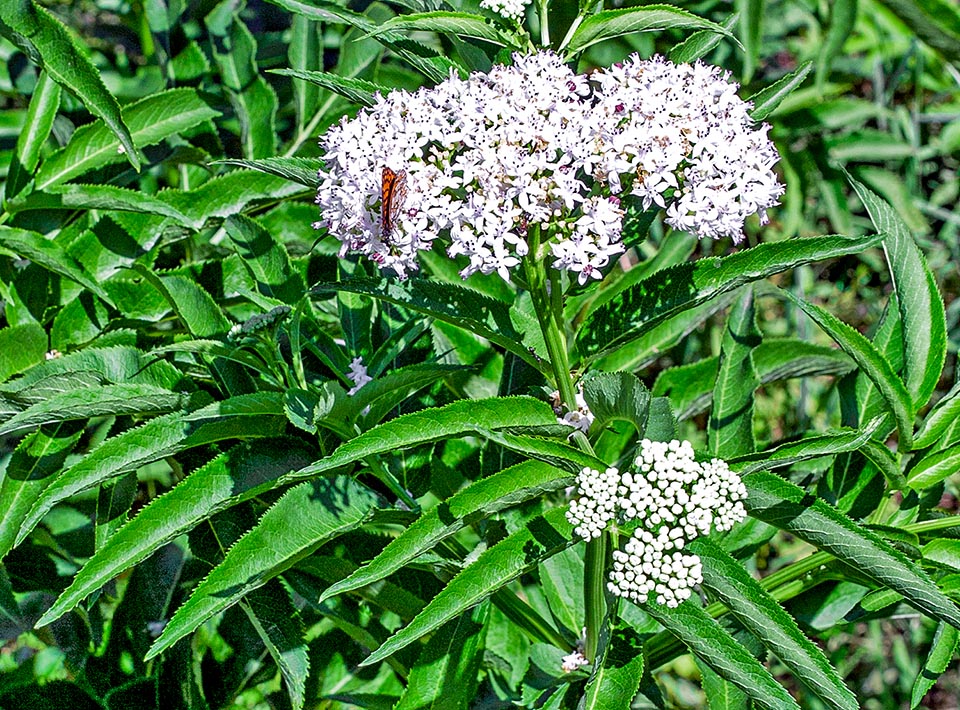 The inflorescences are corymbs of 10-15 cm of diametre, facing upwards even after the fruitification. Usually, they bear 200-250 flowers © Giuseppe Mazza

The stamens are 5, free, with reddish, later violet, extrorse anthers. The ovary is syncarpous and inferior.

The flowers can self-pollinate or are cross-pollinated by insects, usually bees, attracted by the pollen and by the nectar.

The blooming takes place from May to August. The fruits form from August to September and are pyriform drupes of 5-6 mm of diametre, glossy black when ripe, with three kernels. They contain cyanogenetic glucosides that, if consumed excessively, cause vomiting, abdominal pain and diarrhea. 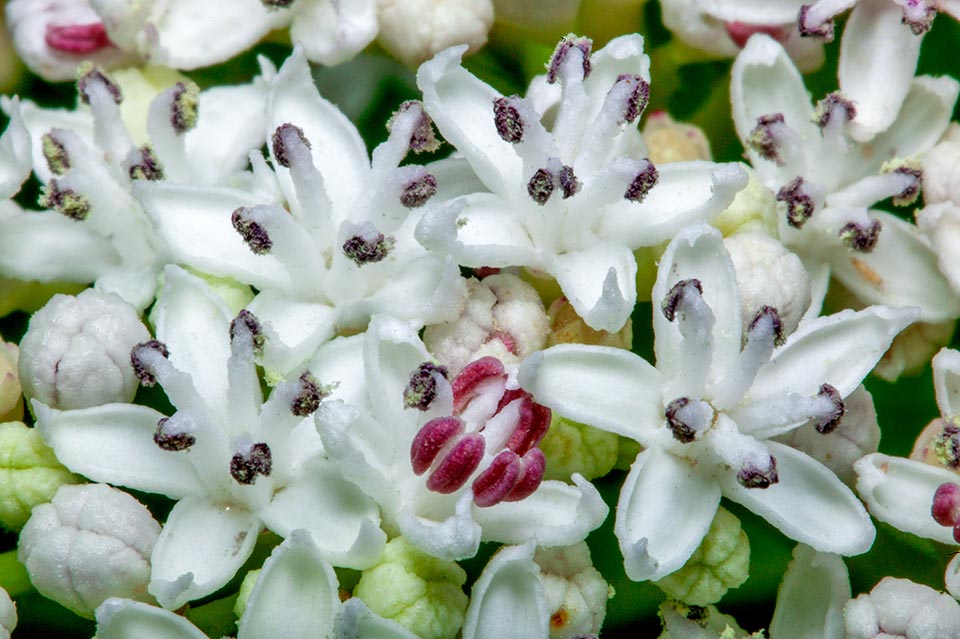 The 5 stamens are free with extrorse reddish, then violet, anthers. Syncarpous and inferior ovary. If insects are absent, the flowers can self-pollinate © Giuseppe Mazza

S. ebulus is a plant utilized in the popular medicine for treating many diseases in several countries of Europe and western Asia.

In the Bulgarian traditional medicine the ripe fruits and the rhizomes are used because of their diuretic, antiseptic, tonic and laxative activity. In Turkey and in other countries of western Asia, are utilized the fruits and the rhizomes for their pain-relieving properties. In other regions, the fruits of S. ebulus are employed for their laxative-diuretic and anti-edematous properties, whilst the dried bark and the leaves are used as antirheumatic.

The dried flowers have sudorific and expectorant properties and are, consequently, employed in the bronchial affections. 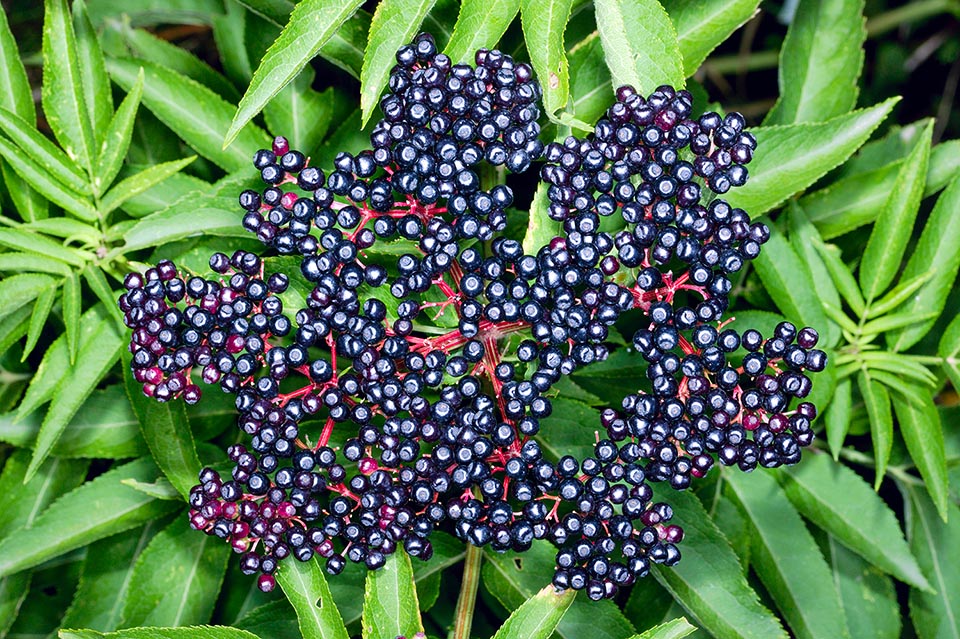 The 5-6 cm of diametre black fruits are poisonous pyriform drupes, but various parts of the plant have interesting medicinal virtues © Giuseppe Mazza

Specific studies have revealed a wide range of medicinal applications of this plant. As a matter of fact, recent scientific results have validated antioxidant, anti-inflammatory, anti-arthritic, pain-relieving and antimicrobial properties.

The latest investigations also suggest that S. ebulus acts on neoplasias, because its extracts inhibit the protein synthesis of cancer cells.

Finally, the drupes are utilized for the preparation of repellents, dyes and inks.