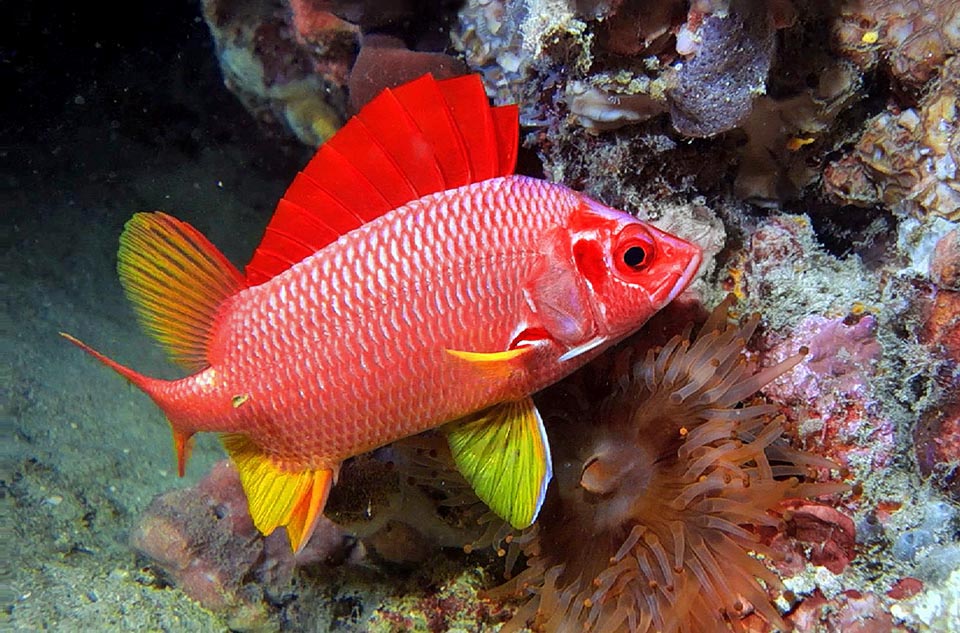 Sargocentrum spiniferum is vastly diffused in the tropical Indo-Pacific. For some the vulgar name of squirrel comes from the showy raised dorsal fin, like the thick tails on the squirrels back, others, conversely, allude to their dens, sited on the cliffs of the reefs, like those of these rodents in the cavities of the trees © Siratus-Sylvie Le Bot

The Sabre squirrel fish,  Sargocentron spiniferum (Forsskål, 1775), belongs to the  Actinopterygii, the immense class of the ray-finned fishes, to the order of the  Beryciformes and to the family of the  Holocentridae  that counts almost one hundred species.

The etymology of the genus comes from sargus”, the name the Romans gave to the Diplodus, and from the Greek Κέντρον” (kentron) = sting, because of the showy spine this fish has on the operculum. The specific name spiniferum = “having a spine”, in Latin, supports the facts.

The Sargocentron spiniferum has a vast distribution in the tropical waters of the Indo-Pacific. We find it from the Red Sea and the Gulf of Aden, in Somalia, and then along the African coast, up to South Africa, Madagascar included and the adjacent islands of Comoroes, Mayotte, Réunion and Mauritius, plus the Seychelles. It is then present, indicatively, in India and in Sri Lanka, Malaysia, Indonesia, Philippines, China, Taiwan and south of Japan. In Oceania, after Papua New Guinea, Solomon Islands and Australia, it reaches Vanuatu and, further south, New Caledonia. Eastward is present in the Fiji Islands, Tonga, Samoa, French Polynesia, Pitcairn Island and further south, Kiribati and the Hawaii Islands. 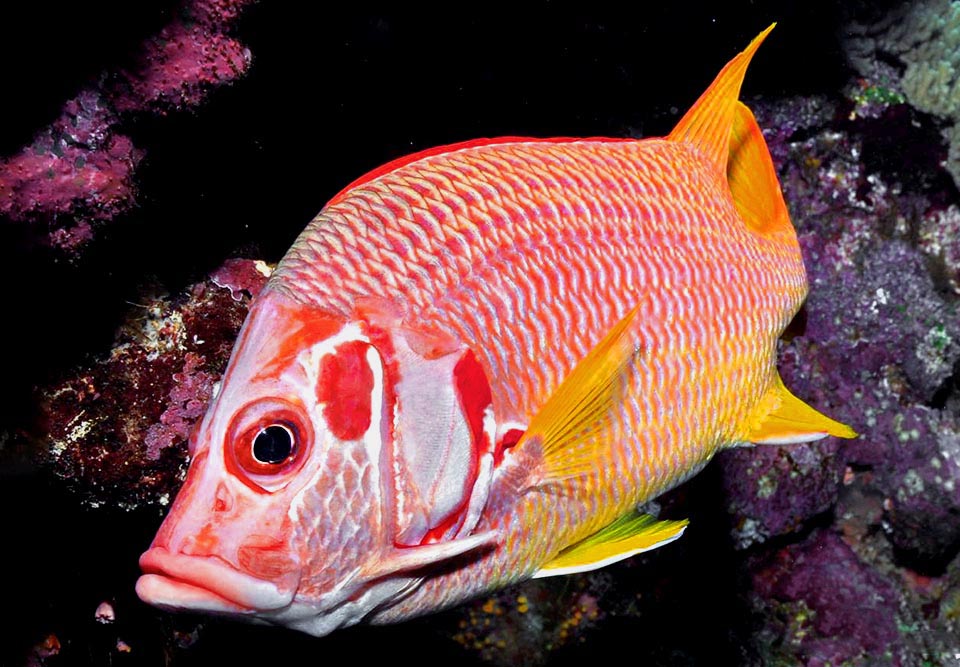 Instead, the scientific name refers to the striking venomous spine of the preoperculum, plus two less evident ones on the operculum © Rick Stuart-Smith, Reef Life Survey

It is present at 1 m of water, but can reach the depth of 120 m. It swims in the lagoons and often on the outer side of the reefs where, seen that it is a nocturnal predator, often spends its days dozing, under the substructures of the Acropora or in small grottoes on the precipices, somewhat similar to the dens of the squirrels on the trunks of the trees, even if others associate the name of the squirrel to the dorsal fin that evokes, when spread out, the showy folded tail of the rodents. The juveniles grow up in shallow waters, in the more protected zones of the madreporic formations.

The  Sargocentron spiniferum is the biggest squirrel fish. It may exceed half a metre, but the most frequent size is of about 35 cm with a weight of 2,6 kg. The scales are big and well visible due to their silvery border. The cheek has 5 scanting rows isolated by a white small border extending up, close to the eye, emphasizing a showy oblong crimson dot. 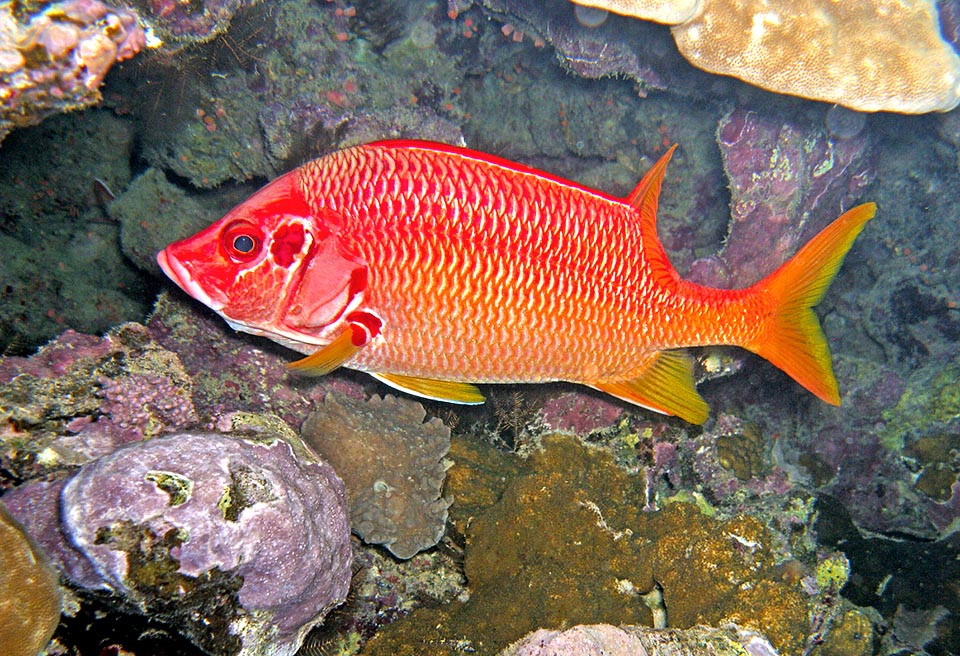 At most 50 cm long with a weight of 2,6 kg, Sargicentron spiniferum is the giant of the squirrel fishes. This species is at times eaten by the locals of by the underwater tourists proud of their booty, but it is at ciguatera risk, a serious food poisoning due to possible presence of poisonous organisms in their diet © Gianemilio Rusconi

The snout is slightly concave with the lower jaw longer, lined at the base on the fore border of the eye. Big lips and huge nostrils.

Characteristic are the two small spines on the operculum, but especially the long poisonous spine at the base of the preopercular zone.

Among the squirrel fishes, the Sargocentron spiniferum is the only one with yellow shades on the fins, whilst the others, like for instance the Sargocentron rubrum, besides being smaller, have a much more tapered body, usually crossed by camouflaging parallel horizontal lines. 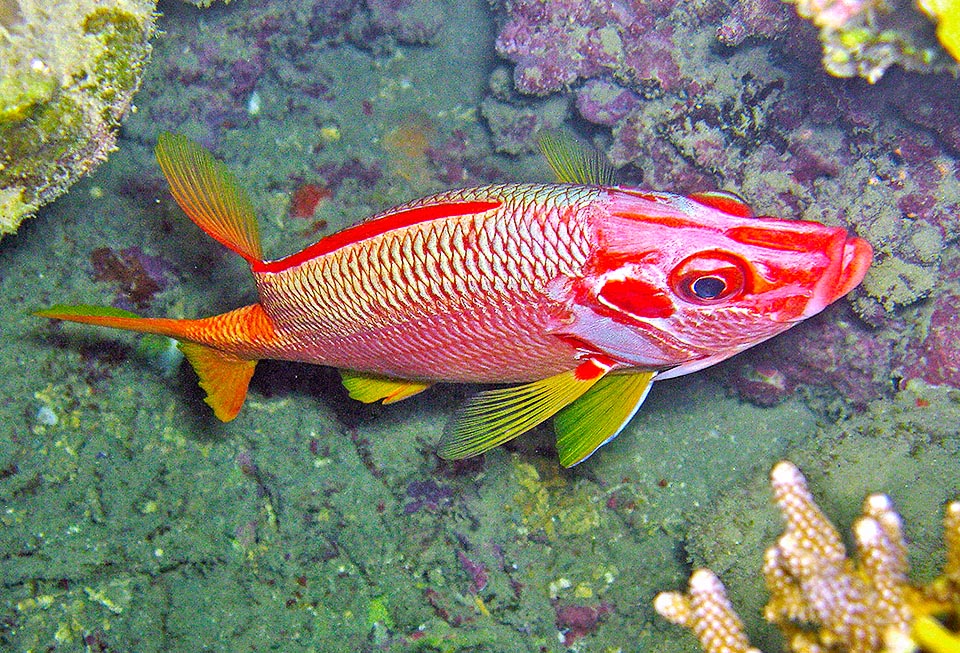 Active by night, alone or in small schools, even at high depths. The school communicates by grunts that form a sort of language © Gianemilio Rusconi

Conversely, here the livery is gaudy, at first sight quite poorly mimetic, but we must not forget in the depths where it lives, the red colour becomes black and that, moreover, the squirrel fish goes aroung hunting during the night.

In the sarkness, only the long white spine will be visible, clear warning signal for the predators, the pale plate of the operculum, the clear traits on the head and the luminous border of the pelvic fins or of the scales. Elements, among other things, of identification for getting in touch with the companions of the school.

In this regard, the Sargocentron spiniferum can emit also sounds, similar to grunts, when disappointed or of attracting the females during the reproductive period. It has been proved that it is a modular sound, a sort of language, also for advising the arrival of predators. It comes from the contraction of an organ connected with the ribs: the more these move, the stronger are the signals. Obviously, the big sized individuals will emit a stronger sound and will be able to withstand for more time the effort of the contraction. So, these signals of light and sound allow; in the dark, the females to get an idea about the physical fitness of the candidate, and the tenors with the longest serenades are surely favoured. 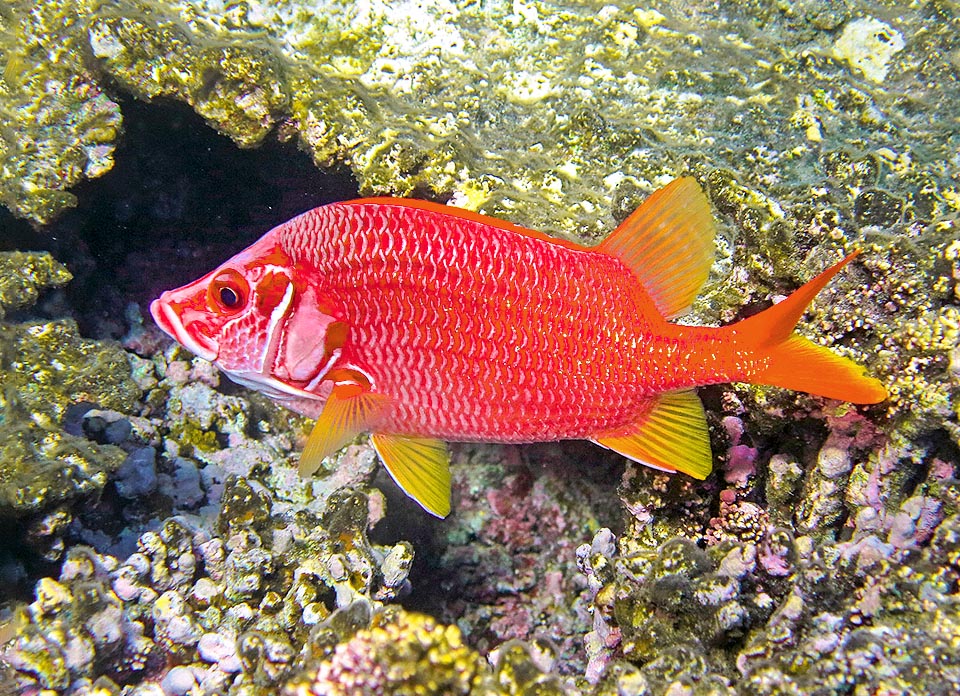 Here near the den where spends the day hidden. The livery may appear too showy to be mimetic, but in depth, where it swims, the red turns black © Gianemilio Rusconi

Fairly common, alone or in small schools, the Sargocentron spiniferum is a benthicpelagic fish that goes exploring the bottoms looking for worms, crabs, shrimps and small fishes.

Fecundation takes place while swimming, usually on the occasion of the full moon, not for romance but because in the case the tide is at its highest,  the eggs are dragged far away by the currents.

Seen its dimensions, the catch is at times consumed by the locals or by the underwater tourists, proud if their booty, regardless to the risk of ciguatera, a serious food poisoning linked to the possible presence of poisonous organisms in the diet of this species. Robust and easy to nourish, the squirrel fish is often present in the large public aquaria, as a matter of fact, the adult’s size is not suitable for the domestic ones. 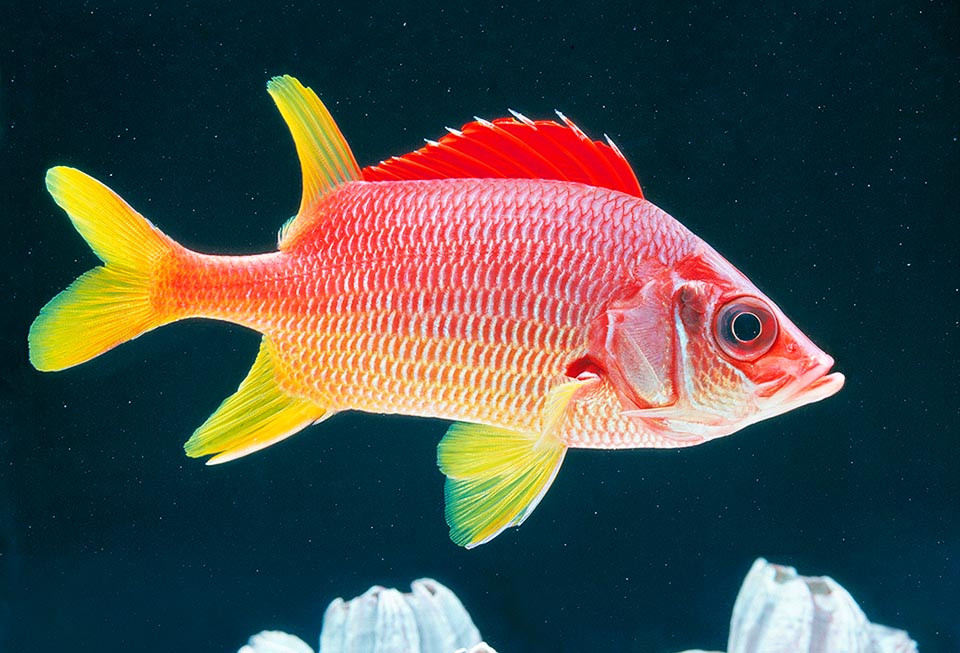 The Spiny squirrel fish is the only one of the group with yellow shades. When young it’s sold as ornamental fish, but is good only for large public aquaria pools © G. Mazza

The resilience of the species is discreet, with the possible doubling of the populations decimated by the event, within 1,4 to 4,4 years, and considering also the vast diffusion, the vulnerability index of the Sargocentron spiniferum is nowadays (2020) fairly low, marking 40 on a scale of 100.

Sargocentron spiniferum was last modified: May 1st, 2020 by Giuseppe Mazza