The species is native to Borneo, Peninsular Malaysia, Sumatra and Thailand where it lives in the underwood of the humid forests, mainly at the margins of the water streams and in swampy areas, up to about 1500 m of altitude.

The name of the genus is the combination of the Greek substantives “σχίσμα, -ατος” (schisma, -atos) = fissure, cleavage, and “γλῶττα” (glotta) = tongue, with reference to the upper part of the spathe detaching by the opening of the flower; the species is dedicated to the Danish physician and botanist Nathaniel Wallich (1786-1854).

The Schismatoglottis wallichii Hook.f. (1893) is a stoloniferous herbaceous species with leaves, on a 15-40 cm long petiole, of extremely variable shape, from oblong-ovate (most frequent), to oblong-lanceolate with pointed apex and base acute (most frequent) to obtuse, rarely truncated to cordate to sagittate, 8-25 cm long and 3-15 cm broad, with central and lateral veins prominent below. Quite variable colour, pale green to dark green, from opaque to slightly glossy, often streaked with a darker central band or two lateral grey-green bands (see photo) or with spots. Inflorescence, on a 7-12 cm long peduncle, formed by an almost cylindrical spathe wtih pointed apex, 7,5-15 cm long, of colour from white to pale yellow, initially with margins almost overlapped, that at the blooming time divides in two parts that keep united at the apex and that contract upward discovering the spadix. 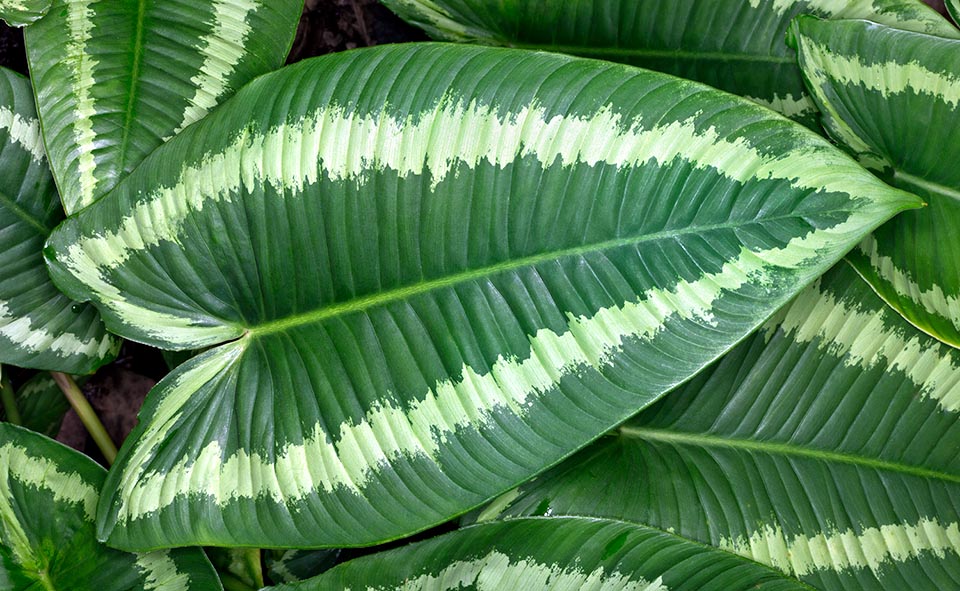 Native to dark damp forests of South-East Asia, Schismatoglottis wallichii is an excellent ground cover in the tropics and good houseplant, for terraria and aquaria too © Giuseppe Mazza

Cylindrical sessile spadix with rounded apex, 5-12 cm long, with unisexual flowers, the female ones placed at the base, the males at the apex, separated by a sterile zone almost equal to male one, the latter feature distinguishes the species. The fruits are oblong berries containing numerous seeds.

It reproduces by seed, in organic loam maintained humid at the temperature of 24-26 °C, and by division. The species is utilizable in parks and gardens of the tropical and humid subtropical zones as ground cover in particularly shaded areas, of great ornamental effect are the streaked forms; it requires draining soils rich of organic substance maintained constantly humid. Is cultivable also in pot for the decoration of little luminous inner spaces, it is also particularly appreciated for its characteristics as plant for aquaria and terraria.

→ To appreciate the biodiversity within the ARACEAE family, please click here.