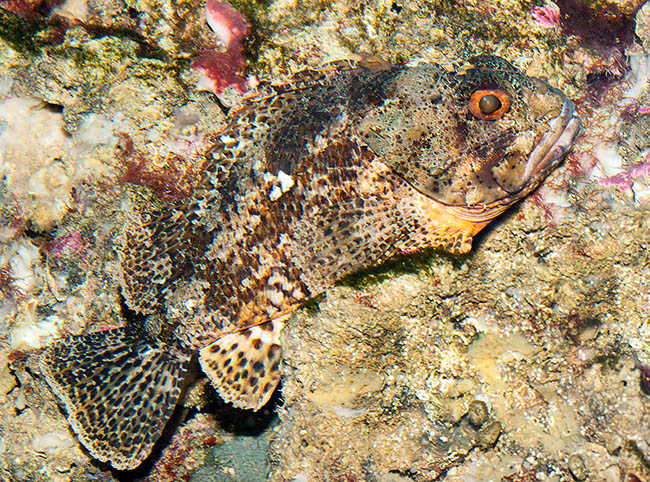 The very mimetic Small red scorpionfish (Scorpaena notata  Rafinesque, 1810) belongs to the class of Actinopterygii, the ray-finned fishes, to the order of Scorpaeniformes and to the family of Scorpaenidae.

The name of the genus is the one given by the old Romans to these fishes, with reference to the spines, which evoke the stings of the scorpions.

The name of the species comes from the Latin “notatus” = marked, labelled, with reference to the mimetic dots present on the fins.

The small red scorpionfish is present all over the Mediterranean, but the Black Sea. After Gibraltar Strait, it goes north- wards, along the Atlantic coasts, up to the Biscay Gulf, and, southwards, it colonizes the African ones up to Senegal, including the Azores, Madeira, Canary and Cape Verde islands.

It is a benthic species which may reach the 700 m of depth, even if, usually, it lives around the 200 m and it has been found at about 10 m. 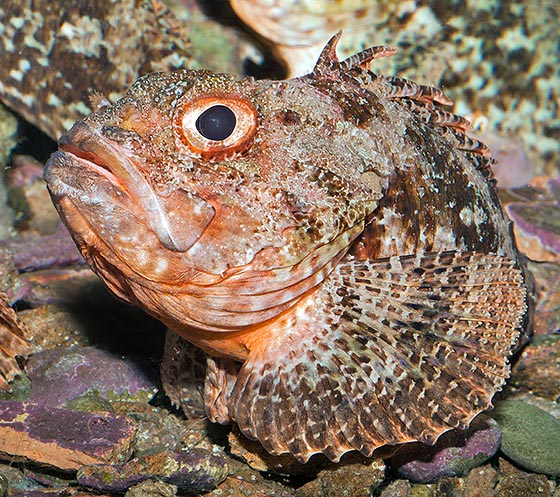 Like all scorpionfshes, it’s a fish loving to live isolated, possibly sheltered by a rock, where it feels perfectly safe seen its exceptional mimetic capacities.

It can reach the 24 cm, but rarely exceeds the 18 cm and the most fished specimens measure 12-15 cm. Due to the size and the stocky body, even if proportionally taller, it reminds the Black scorpionfish (Scorpaena porcus), another master of camouflaging, whilst the colour is closer to that of the Red scorpionfish (Scorpaena scrofa).

The laciniae are scarce because the mimetic effect is based mainly on the maculated pattern interesting the body as well as the fins. Given that usually the juveniles are darker, we go from the dark-brown to the pink-orange, to the violaceous and even, seen from above, to the greenish. 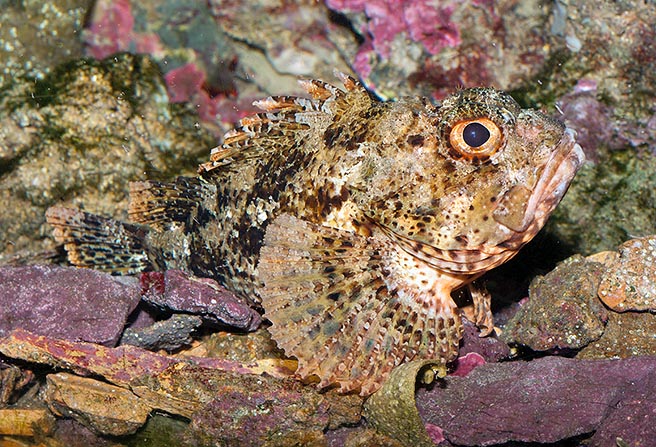 Clever who can see it in its habitat! The dorsal spiny rays are poisonous © Giuseppe Mazza

The small red scorpionfish is a greedy carnivore who goes hunting during the night. Small fishes, crustaceans and other invertebrates belong regularly to its diet. It reproduces during the summer with floating eggs, merged, ad usual, in gelatinous small masses. Even if, like the other scorpionfishes, it is an ingredient of the fish soup, it is fished only occasionally, and it is not surely an endangered species, also because its population may double in 1,4-4,4 years. The vulnerability index of this species is of 27 over 100.