The Black scorpionfish (Scorpaena porcus Linnaeus, 1758) belongs to the class of Actinopterygii, the ray-finned fishes, to the order of the Scorpaeniformes and to the family of Scorpaenidae.

The name of the genus is that given by the old Romans to these fishes, with reference to the spines, recalling the stings of the scorpions. The name of the species comes from the Latin “porcus” = pig. Again, like for the Scorpaena scrofa, the great Linnaeus, while describing these fishes, was thinking to the pigs. 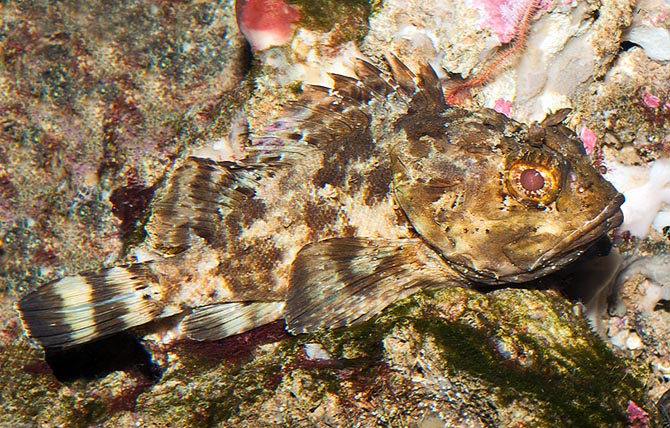 The black scorpionfish is well distri- buted all over the Mediterranean, Black Sea included, even if here the individuals are scarcer.

After Gibraltar Strait, we find it, northwards, up to UK and southwards up to Morocco, plus the Azores, Madeira and Canary Islands.

It lives along the coasts, including the lagoons, even in few metres of water, hidden among the rocks. It loves the luminous locations, with many seaweeds, where its preys do live. Being a master in the camouflaging, during the day sleeps unnoticed and goes hunting during the night.

It can reach the 37 cm, but usually it does not exceed the 25 cm and the more frequently seized specimens measure 15 cm. The body is stocky, the head big with two typical small horns over the eyes. Actually, they are rugged cutaneous excrescences resembling to small ears.

The laciniae are quite scarce, and never under the chin. In this scorpionfish the camouflaging effect is mainly entrusted to the pigmentation. The head is full of spines, not only on the operculum and the pre-operculum, but there are also some invisible under the skin. 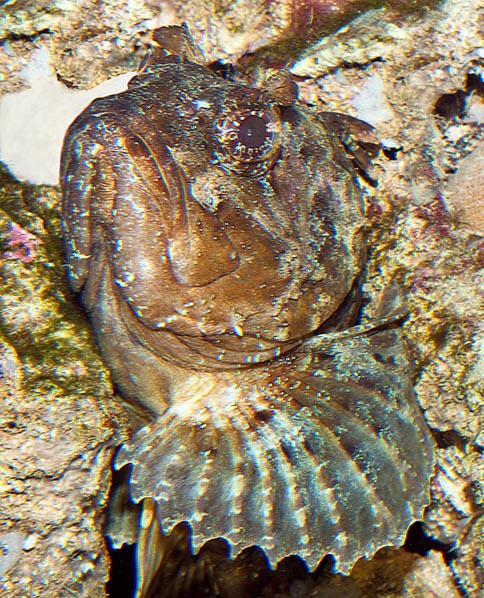 The spiny rays of the dorsal fin are poisonous © Giuseppe Mazza

The mouth, protractile, follows the usual scheme, with bands of villiform teeth present also on the palatines and the vomer. The swimbladder is absent as it is of no use, seen that it hunts by ambush, leaning on the bottom.

The black scorpionfish is a greed carnivore. The Gobiids (Gobiidae) and the Blenniids (Blenniidae) living on the submerged rocks are its main course, but by sure it does not ignore the crustaceans and the other invertebrates moving in the vicinity.

It reproduces between May and August with floating eggs, united in small gelatinous masses. When 15 mm, the young already resemble to the adults and when about 10 cm, the can reproduce in their turn. Even if, like the other scorpionfishes, it is an ingredient of the fish soup, it is inadvertently fished, and it is not a very endangered species. The population can double in 1,4-4,4 years and it is very common along the Italian coasts.

The vulnerability index of this species is of 49 over 100.