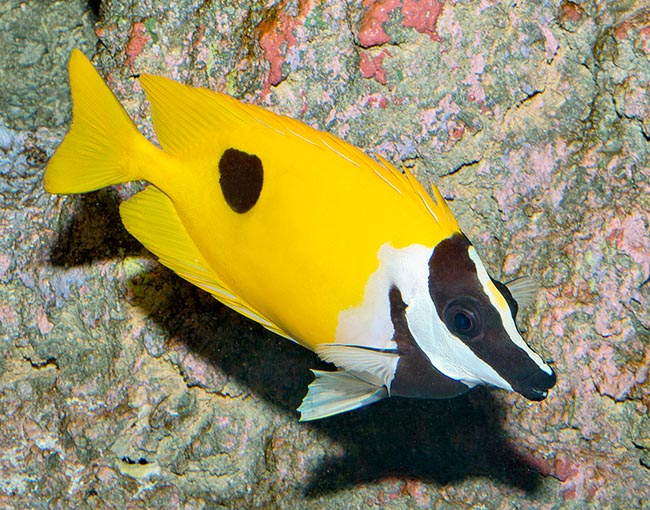 Still now considered by some ichthyologists only as a geographical variant os Siganus vulpinus, the Siganus unimaculatus is present, alone or in couple, in the madreporic formations of West Pacific Ocean © G. Mazza

The Blotched foxface (Siganus unimaculatus Evermann & Seale, 1907) belongs to the class of Actinopterygii, the ray-finned fishes, to the order of Perciformes and to the family of Siganidae counting only one genus, Siganus, and 29 species.

They are the so-called rabbitfishes, known also as foxfaces, due to the contour of the head with prominent lips and small interlocking teeth to cut the vegetals of the submerged prairies.

Mostly marine, but at times also of brackish water fishes rarely exceeding the 40 cm and at times holding an important rôle in the human alimentation.

The specific name unimaculatus, simply means in Lartin “with only one spot”.

The Siganus unimaculatus is at home in the Western Pacific tropical waters. We find it in Australia, the Philippines, the Ryukyu and Ogasawara Islands and in Japan. 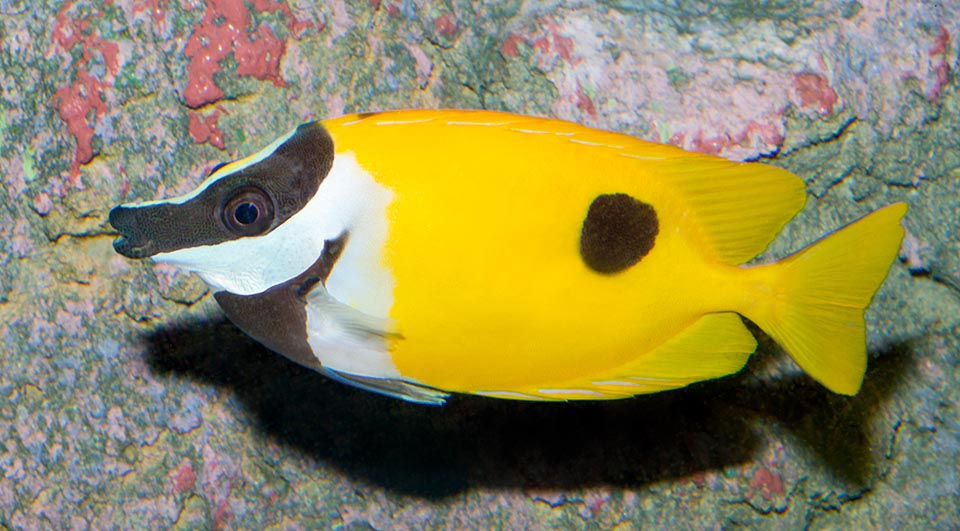 Typical is the dark spot toward the tail simulating an eye. Basically circular, varies as shape among individuals with possible nearby shades © Giuseppe Mazza

It is a marine species linked to the madreporic formations. It lives on the outer border of the reefs, not beyond the 30 m of depth, and in the lagoons. 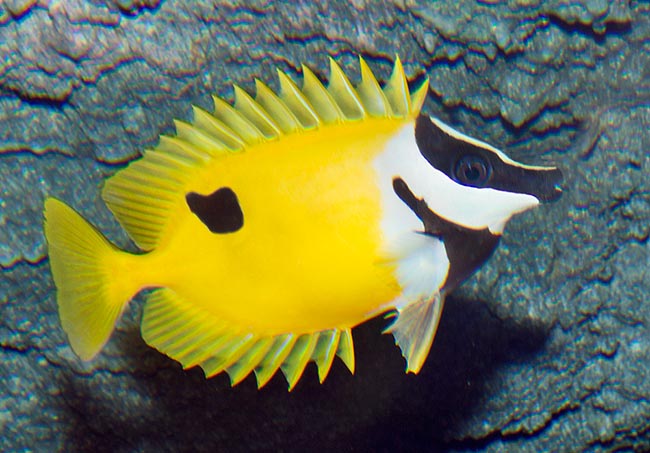 Extended fins specimen. The spiny ones have a venom bulb at the base © Giuseppe Mazza

It doesn’t exceed the length of 20 cm. Oval body, flat on the sides and elongated snout. Apart the spot, it is virtually identical to Siganus vulpinus, and in fact some consider it as a geographical variant only.

The front part, mimetically isolated with a neat cut from the rest of the body, lives of contrasts. On the white background stand out two well defined black zones passing side to side the fish masking the eyes, the mouth and the area close to the operculum, up to the pectoral and ventral fins. The rest is of a nice strong yellow colour but the showy black spot towards the tail that simulates a false eye, as often happens in the colourful fishes of the coral reefs. 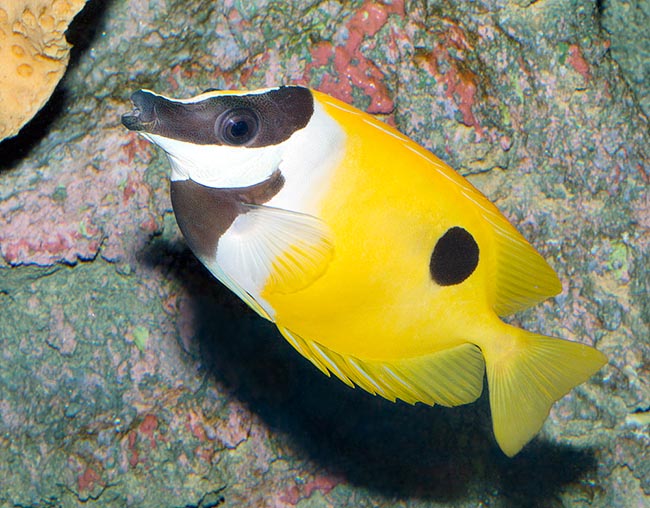 The diet is mainly vegetarian, without forgetting the zooplankton and the small benthic invertebrates © G. Mazza

This spot, characteristic of the species, varies like the human fingerprints, among individuals: it can be a circle almost symmetrical or of an irregular shape, with a clear detachment on the yellow or with dark shades close to it.

The Blotched foxface has a mainly vegetarian diet: grazes the filamentous weeds at the base of the old madrepores and visits the submerged prairies. It nourishes of plankton and when is the case of small invertebrates.

The eggs are entrusted to the currents. The newborns gather in pelagic schools and while growing they head to the reef in order to often take shelter under the “table corals” of the genus Acropora. The adults swim solitary or in couple.

It is not an endangered species. In fact, the resilience is excellent: even less than 15 months are sufficient to double the populations decimated by the events. The vulnerability index is unbelievably low, just 18 on a scale of 100.