Smelowskia americana (Regel & Herder) Rydb. is one of the 25 species, taxonomically valid, of the genus Smelowskia, the only one of the tribe Smelowskieae, family Brassicaceae.

The name of the genus Smelowskia honors the Russian botanist and pharmacologist Timofei Andrejewitsch Smelowski (1771-1815), the specific epithet refers to America, range of origin of the taxon.

Common name: American false candytuft. The English term Candytuft is the common American name of Iberis sempervirens L. and refers to Candia, old Venetian name of Heraklion, capital of the island of Crete, place from where this species was imported. Due to its resemblance with S. americana, was given the same common name, but, in order to distinguish it, with the addition of “false”. Common Italian name: Falso cespo di Candia.

The English botanist Joseph Dalton Hooker (1817-1911) in 1870 realized that the flora of the Rocky Mountains (North America) and that of the Asian range of Altaj, located along the boundary between Russia, Mongolia and Kazakhstan, were very similar. 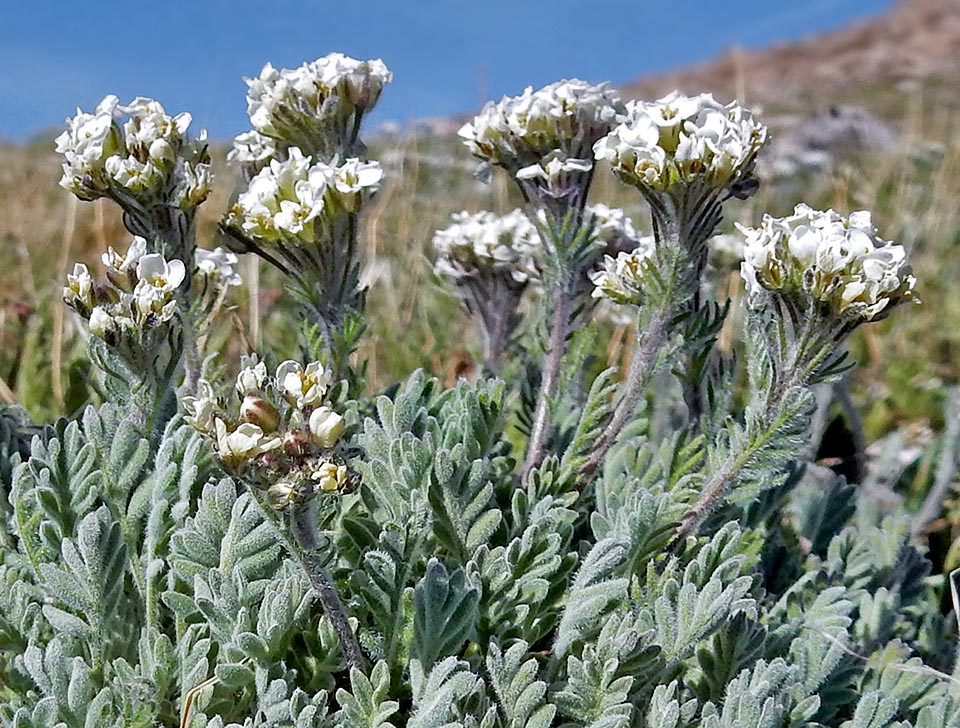 Smelowskia americana is a perennial herbaceous orophytic species, densely cespitose, reaching 20 cm in height, with hairy pinnate leaves to protect itself from the cold © Matt Lavin

More recently, the botanist William Alfred Weber (1918-2020) has hypothesized that the florae of these areas, very vast and nowadays separate, were contiguous in the late Tertiary, before being parted by the continental ice caps in the Pleistocene.

This hypothesis would explain the presence of similar high-altitude species in distant sites without the need to invoke episodes of long-range dispersion done by the wind or by the birds.

He has hypothesized that these alpine species have survived the ice age because they have found shelter, inside the glaciers, on non glacial rocky outcrops called nunatak (summits of mountains not covered by ice). Later, when the glaciers melted, it was possible that these plants have moved to repopulate the arctic environments devoid of any form of vegetation.

The genus Smelowskia, that contains diploid as well as polyploid species, has been the object of molecular studies that have shown congruence with what was observed in morphology and geography. 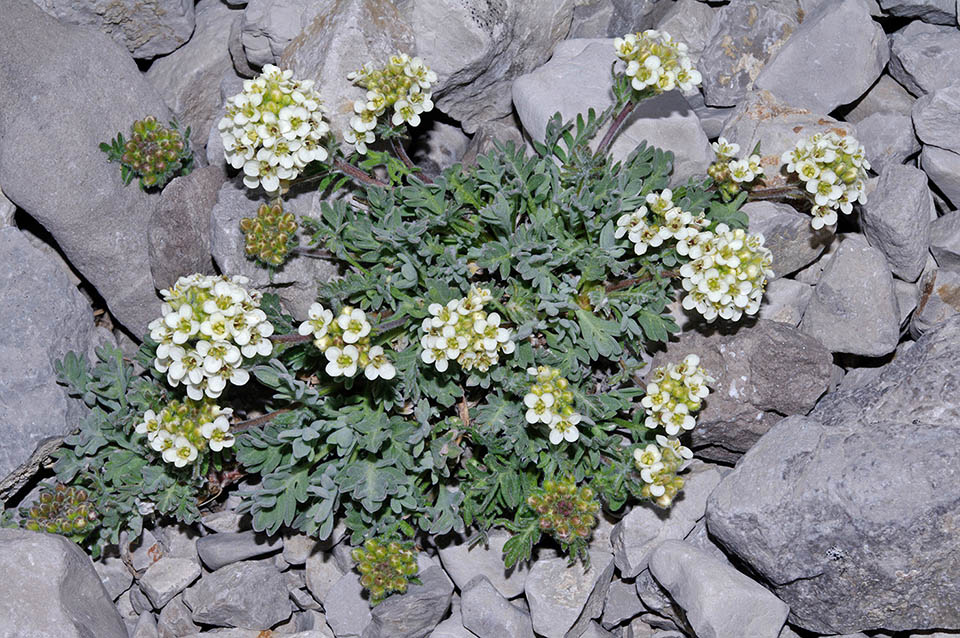 It is a plant with racemose inflorescences and white petals that lives on screes, in rocky ravines, in the meadows above the treeline, at altitudes between 1600 and 4000 m © michaelwpotter.ca

Thanks to these studies it has been brought to light also the importance of the polyploidy, as a phenomenon essential for the evolution of the arctic flora. Moreover, it has been possible to verify the Asian origin of the American taxa. In fact, it is admitted that through the land bridge (Beringia) of the Bering Strait, in various periods, they have come in America crossing Alaska and Siberia during the ice ages of the Pleistocene and, particularly, during the last glacial maximum (about 25.000-21.000 years ago). Hence, S. americana may be deemed the result of an allopatric speciation that took place in the shelters of the glacial age.

The range of Smelowskia americana also includes part of North America (Alberta, British Columbia, Colorado, Idaho, Montana, Nevada, Oregon, Utah, Washington, Wyoming). Previously considered a variety of the Asian Smelowskia calycina (Stephan ex Willd.) C.A. Mey., thanks to the molecular differences, even though recognizing its affinities, it has been elevated to the rank of species. As a matter of fact, morphologically, the two species are very similar and S. americana distinguishes from S. calycina for the caducous calyces instead of persistent.

S. americana lives on the screes, in rocky ravines, in the meadows over the limit of the wood, at altitudes of 1600 to 4000 m. 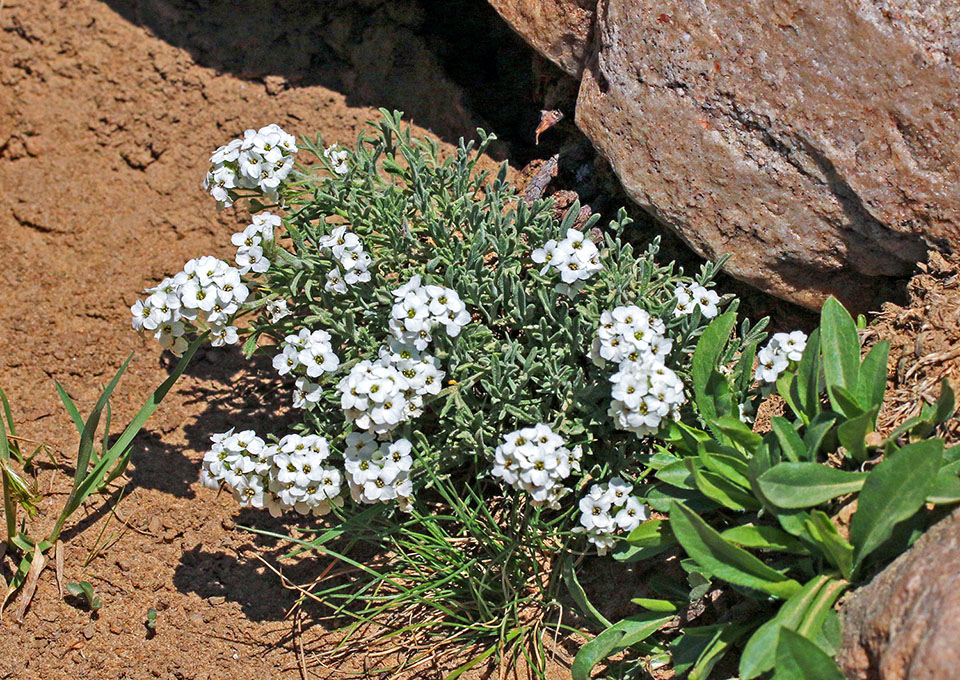 They are perennial herbaceous plants, densely cespitose, canescent due to the presence of hairs. The caudex is well developed, usually ramified from the base, covered by remnants of the dry petioles of the previous years. The stems, numerous, often not ramified, measure 6-20 cm and can be covered by simple hairs (0,5-1,3 mm), mixed with others, ramified and smaller, that have the function of protecting the tissues from the extreme cold.

The basal leaves, on 1-5 cm petioles, are pinnate or pinnatifid, with simple hairs and with oblanceolate to ovate lamina and with linear terminal segments, oblong or ovate of 1-3,5 cm x 4-17 mm. The cauline leaves, little petiolate or sessile, have the lamina like the basal ones, smaller in the distal ones. 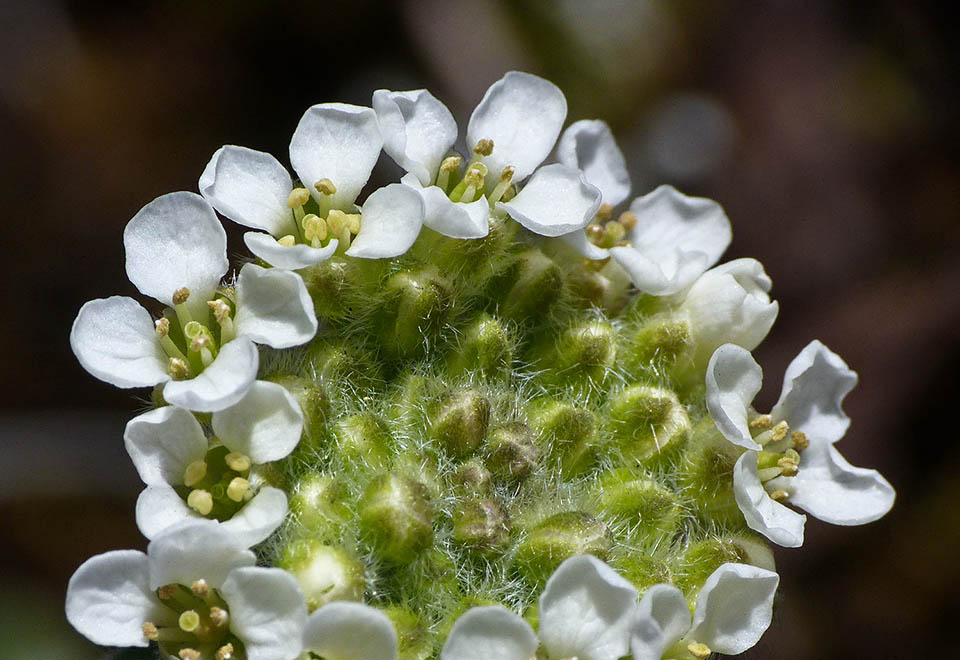 Detail of raceme. The flowers at the margins are already open with 4 white petals, 6 stamens and the discoid stigma, in the center, still in bud, are covered with a thick down © Anne Elliott

The stamens are six and the anthers measure 0,5 to 0,7 mm. The ovary is superior and presents a 0,2-0,8 mm long style surmounted by a capitate stigma. In the ovary are present 8 to 12 (-14) ovules. The blooming takes place from June to August, at times in September. The flowers are grouped in racemose inflorescences devoid of bracts that elongate when fructifying. The pollination is done by insects of the family Apidae: Bombus insularis and Bombus flavidus.

The seeds are brown, uniseriate, oblong to ovoidal (from 1 to 1,9 mm), not winged, minutely reticulated, not mucilaginous if wet, with obliquely incumbent cotyledons.