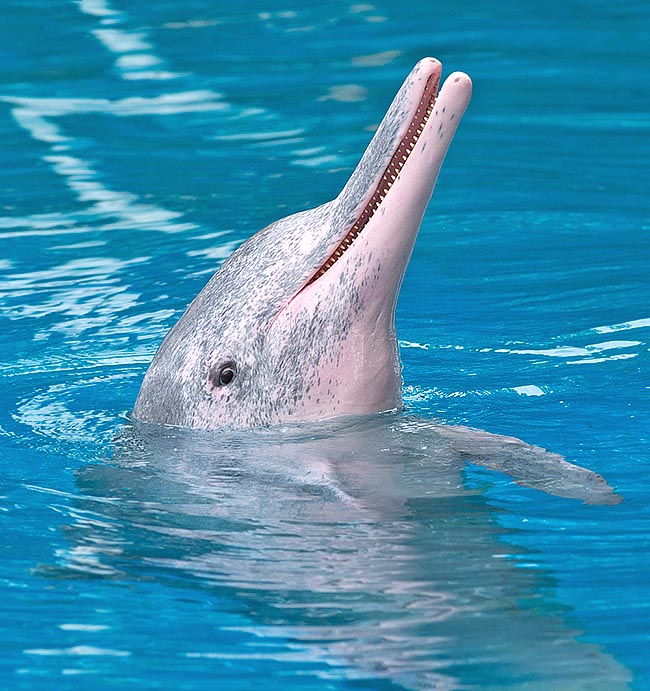 The unusual Indo-Pacific humpback dolphin (Sousa chinensis Osbeck, 1765) is a very rare odontocete cetacean, of the family Delphinidae, but inside the genus Sousa the taxonomy is unclear. Presently all the various morphotypes are considered as members of the single species officially recognized: Sousa chinensis.

Some biologists, however, do consider at least another species, the Sousa plumbea, that has a range not overlapping with Sousa chinensis, and dramatically differs in the colour, “plumbea” defines it clearly as a tonality of dark grey, and in the morphology. In any case, the cranial proportions are practically indistinguishable and the morphological differences are not informative on the phylogenetic point of view.

The generic name Sousa does not have a clear origin, whilst the specific one chinensis by sure refers to the fact that one of the origin areas of this animal was China. In Cantonese, the fishermen have given to Sousa chinensis the appellation of “wu gei-bak gei”, that literally means “white taboo-black taboo”, and this indicates an ill-willed person or a person holding a bad omen. Probably, this name comes from the fact that the groups of Indo-Pacific humpback dolphins had quickly learnt to follow the fishing boats to get easy food taking it from inside the nets before that the same were hoisted aboard.

The Indo-Pacific hupback dolphin has a poorly known distribution, as the population is formed by a very small number of specimens, moreover fastly decreasing, and for some zones it is based on single sightings. However, virtually, its distribution range is rather vast, including the Indian Ocean coasts, from the south-eastern coast of the African continent, Madagascar, going north to the Red Sea, along the Yemen coasts, up to India and in the Philippines seas, from south of China to the northern Australian coasts.

The distribution is not too known, due to the poor number of findings, but virtually vast, from East Africa and Madagascar up to South China and North Australia © G. Mazza

The distribution of this species appears to be confined in the coastal waters where the bathymetry never exceeds the 100 metres. They prefer to frequent gulfs, enclosed seas and lagoons, where they are regularly sighted. They are rarely seen offshore, but, on the contrary, they willingly visit the inner waters, and can go upriver even for various kilometres, though if usually they keep in the areas still interested by the tides. 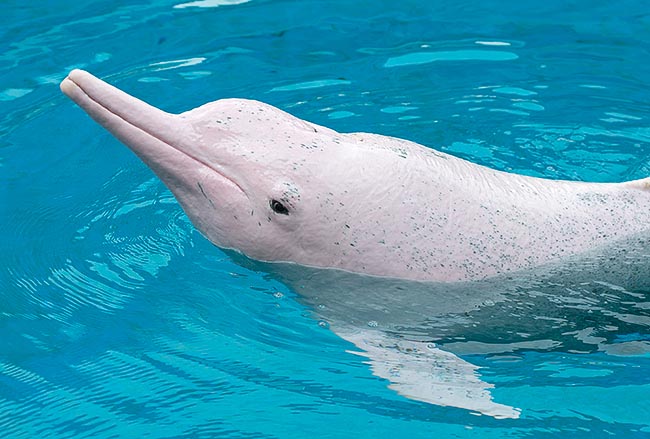 It lives in relatively shallow waters of gulfs and lagoons, at times going upriver for several kilometres © G. Mazza

It nourishes of fishes of coastal habitats, estuaries, coral reefs and mangroves, but in some zones it varies the diet with cephalopods and, rarely, of crustaceans.

The body is more robust and stockier than that of other dolphins.

The beak is long, about the 10% of the total length of the animal, and neatly detaches from the melon.

To the characteristic “hump” of the Sousa chinensis is due the English common name of Humpback dolphin.

The males are slightly bigger than the females. The shape and the size of the dorsal fin and of the hump on which it stands up vary quite a lot.

We go from specimens having a short fin, only slightly curved and ample base to animals with markedly curved and longer fins. For what concerns the hump, this usually grows along with the size of the animal, up to overly showy humps, but in some populations the hump is almost completely absent. As previously mentioned, the colours are much variable. We go from the African populations, dark grey on back and sides, that gradually fades in a dirty white of the ventral surface, only rarely spotted.

Long about 10% of the body, the beak clearly detaches from the roundish zone of the head called “melon”. It serves to catch fishes among mangroves and the intricate coral world. They are the main dish of the diet, but if it’s the case, they do not ignore cephalopods and crustaceans at times © Giuseppe Mazza

The Indo-Pacific humpback dolphins of the Indian Ocean are uniformely brownish-grey. In China and in the south-eastern Asian seas, the young are dark grey, the sub-adults are pink-greyish flecked, up to the adult who is white or pink. It is interesting to note that the pink colour of the adults is due to the blood supply of the subcutaneous vessels and not to a real skin pigmentation. The variations of colour are even more varied than those described, with spots, rings and partial whitenings, but seem to be linked to populations residing in some areas, and therefore impossible to be described in a uniform way. 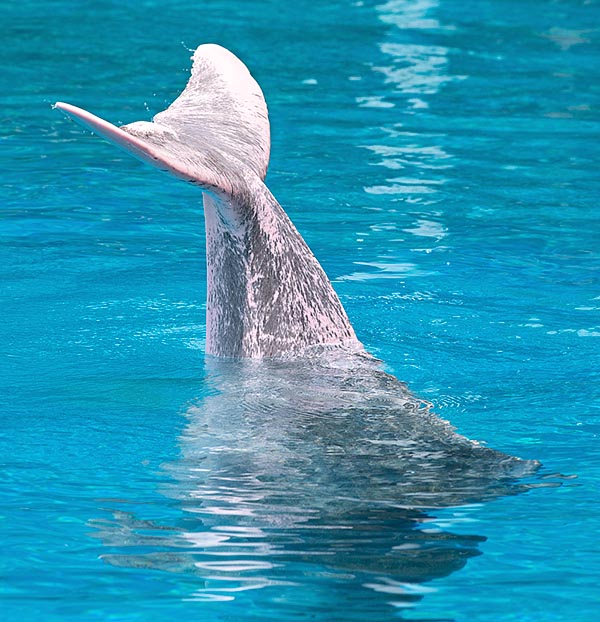 Like all cetaceans and unlike fishes, the tail has developped horizontally © Giuseppe Mazza

Some births may take place all over the year, but normally spring and summer are the seasons where the peaks are observed. The gestation lasts 10-12 months, and at the childbirth, occurring with a minimum interval of three years since the previous one, comes to birth one single young about one metre long.

The lactation probably lasts two years, but the relation mother-son keeps very close for at least three-four years. The sexual maturity is reached when 12-13 years old in the males, whilst the females are more precocious of a couple of years.

The groups are always well balanced for what concerns the distribution of the sexes and of the ages. Moreover, the number of the individuals is not caused by the activity they are performing. However, the group of the Indo-Pacific humpback dolphin is very fluid, and the links are not lasting, but those between mother and young. Usually Sousa chinensis swims with a quite characteristic modality, with the beak touching the surface before the nape.

It feeds mainly in the highly productive coastal systems, but has learnt to follow the trawling fishing boats, and to eat the fishes being driven out from the bottom. In Africa, they follow the preys almost up to the shore, beaching and then going back in safe waters, sated. They frequent also waters with high density of noise pollution and of vessels traffic, without being too disturbed.

It has been observed that some individuals control even very vast areas, of several tens of kilometres of coast, and in some instances have been also described phenomena of territoriality, characterized by particular vocalizations.

It can reach 2,8 m and 280 kg, but the showiest charaxcteristic is the adults pink skin, due to the blood circulation in the under skin vessels © Giuseppe Mazza