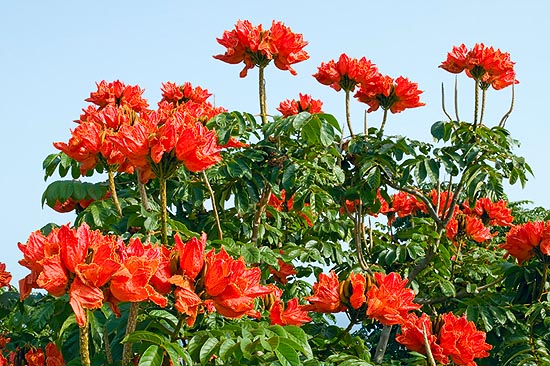 The name of the genus is the combination of the Greek word “spathe” = sword, with the suffix “-oeides”, from the Greek “êidos” = idea, form, hence, similar to a sword, with reference to the shape of the calyx; the Latin name of the species, “campanulata” = bell shaped, refers to the form of the corolla.

Evergreen fast growing tree, which usually reaches a height of 20 m, even if in their origin areas specimen of about 30 m can be found; the leaves are imparipinnate, long up to 60 cm, with 7-17 ovate or elliptic leaflets, 15 cm long and 7 broad, of a dark green colour and covered with a rusty coloured down. 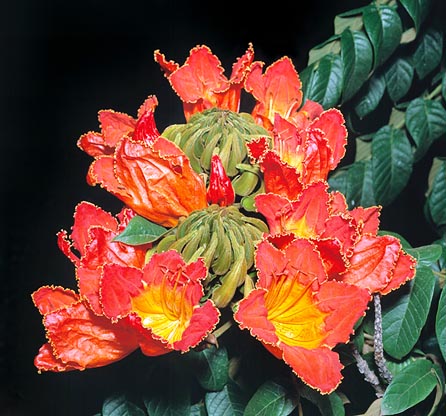 The terminal inflorescences, erect, carry campanulate flowers with frilly margins of a bright orange-red colour with gold yellow striae in the throat, of about 12 cm of length, and a diameter of about 10 cm; a yellow flowered variety does exist.

The fruits are woody capsules of brown colour, 25 cm long and 6 broad, containing many small winged seeds. It reproduces by seed, cutting and air layering.

Plant of enormous ornamental value, so much that it’s considered as one of the most beautiful trees, it’s nowadays amply present in all tropical and subtropical countries, often naturalizing so much to be inserted between the most invasive species.

It can be cultivated also in the areas with warm temperate climate in particularly sheltered location, as it does not bear temperatures around the 0°C, in fact, the aerial part passes away with temperatures around -1°/-2°C, even if often it vegetates again at the base.

The buds contain a liquid which can squirt out if pressed, hence some of the common names. Bark and leaves are utilized in the traditional medicine in some of its origin countries, due to their antibacterial properties.