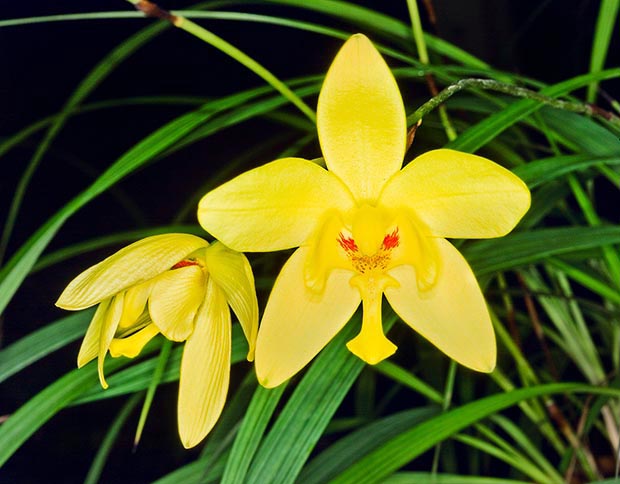 The species is native to Borneo and the Philippines, where it grows in the humid forests near water streams on layers of decaying vegetation, between the 600 and the 1500 m of altitude.

The name of the genus is the combination of the Greek terms “spathe” = spatula and “glotta” = tongue, with reference to the shape of the labellum; the species is honoured to the American orchids collector W.S. Kimball.

Lateral, 60-90 cm long, inflorescences carrying flowers of 5-7,5 cm of diameter of bright yellow colour opening in succession, in groups of 2-3, for 3-4 months, with similar sepals and petals, ovate, about 3 cm long and 1,8 cm broad and trilobed labellum, about 2 cm long, speckled of red at the base. It easily propagates by division.

Very popular terrestrial orchid, especially in the tropical zones as garden plant, due to its long and abundant flowering and the facility of cultivation, it requires partial shade, but stands well also the full sun, medium-high temperatures, with winter night lows of 15-20 °C, and high constant humidity, 60-80%.

The waterings must be regular and abundant during the vegetative period, slightly reduced, but without ever allowing the soil to dry up completely, in winter. It is better to utilize for the waterings and the nebulisations non calcareous and chlorine free water. It is not particular about the substratum, provided the same is slightly acidic, rich of organic substance, well draining and aerated, as it does not bear stagnations which may cause lethal rottenness.

For the cultivation in container, are to be utilized fairly capable vessels, as they quickly form big tufts with an extended rooting apparatus. Repottings and divisions are to be done by the end of the flowering.