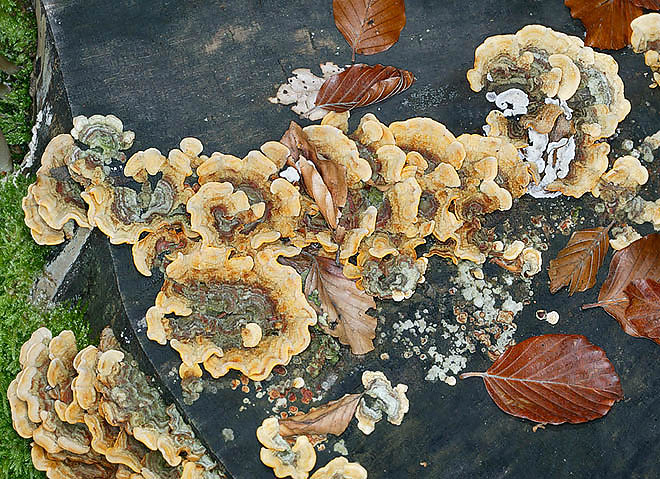 The name of the genus comes from the Greek “stereós” = firm, sturdy, rigid; whilst hirsutum comes from the Latin “hirsutus” = rugged, due its villous surface.

It is a fungus which does not hold any alimentary interest, therefore it has no current or dialectal names in Italy.

In the Genus Stereum are standing resupinate as well as effused-reflexed carpophores, only in a few instances, shortly stipitate, with wavy, lobed margin; smooth hymenophore, at times a little warty, placed in the lower part of the fungus; the flesh is coriaceous-elastic or woody. Dimitic hyphal system with structural hyphae, hyaline generative hyphae without clamp connections. 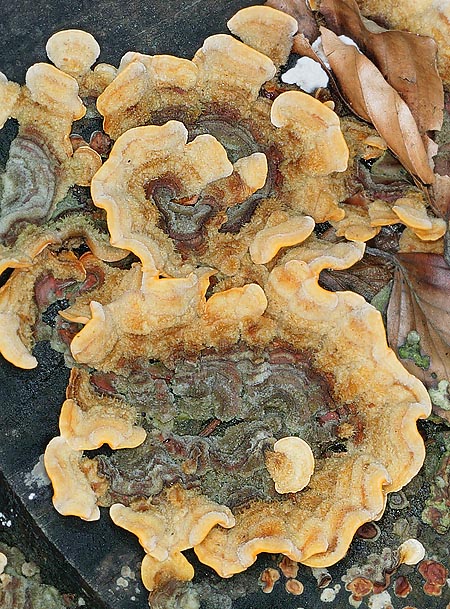 Cap: usually expanded-reflexed, rarely resupinate, often with overlapped caps, imbricate and bracket-shaped; villous pileus surface more evident towards the connection point to the substratum, irregularly sinuous and waved; the colour, variable, goes from the orange-yellow to the brown or grey-yellow, with concentric zones of brown-orange and often paler margin.

Hymenium: placed in the lower part of the cap, resting on the substratum, smooth, sometimes somewhat gibbous, from yellowish to orangey, in the older specimens it becomes ochre-grey or hazel.

Habitat: it fructifies all the year round on rotten wood of broad-leaved trees, on logs, stumps or big branches.

Edibility: does not have any alimentary value due to the little flesh and mainly because coriaceous.

Remarks. It is the most common fungus, recognizable by the velvety basidiomes and the yellow-orangey colouration.

Over the years, between the 1800 and the 2009, they have created even 26 entities among forms and varieties of the typus species. There are several other species of Stereum not always easy to determine macroscopically.

Much similar are: Stereum subtomentosum Pouzar, which, however, is slightly stipitate, has a short haired surface, thinner than S. hirsutum, whilst the habitat is the same; Stereum insignitum Quèlet , growing in a southernmost area, stipitate too, having darker pileus colours and pale ochre hymenium, with cylindraceous of clavate elements decorated with excrescences at the apex (pseudo-acanthopodious). 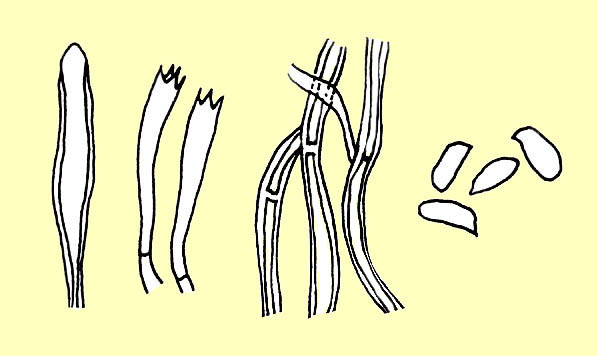 Stereum ochraceoflavum (Schweinitz) Saccardo, is a small species with paler colours on the whitish-grey on the sterile part, the hymenium pale grey or grey-yellowish, growing on small branches of broad-leaved, especially Quercus.

Stereum reflexulum D. A. Reid which is a resupinate southern Europe species, growing on broad-leaved trees and on bushes, with cap having a grey surface, small (0,5 cm), often with pink hues on the hymenium.