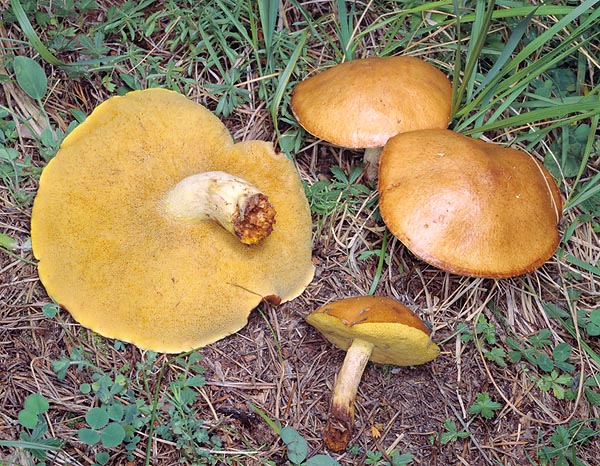 The Suillus granulatus cap may reach the 15 cm, the cuticle is slimy © Giuseppe Mazza

The name comes from the Latin “granulatus” = grainy, with grains, due to the stem which is adorned with granules.

To the genus Suillus attributed species with hymenium having tubules and pores presenting a slimy cap, with smooth cuticle, but in some cases even pubescent, completely removable, or removable in pieces, from the underlying flesh.

The stem, mostly adorned with granulations caused by the desiccation of small exuded droplets; furthermore, some species do have a persistent ring (residual of the universal veil).

All species belonging to this genus are exclusive symbionts of coniferous; some species do have mycorrhizal relations only with one single type of superior plant.

Cap: 5-15 cm, initially hemispheric, the flat convex, finally almost flat, inrolled margin at the beginning, then spread, at times irregularly lobed or sinuous; smooth cuticle, glabrous, greasy and shiny in wet weather, completely removable; the colour is much variable, going from the yellow-ocher to the tawny brown, at times even very pale.

Hymenium: adnate tubules, thin, of average length; the colour varies from the pale yellow to the greenish yellow when ripe. Angular pores, small at the beginning, then bigger, from pale yellow to sulphur yellow, then greenish yellow, during the first stage of life the carpophores secrete some opalescent droplets which, while drying up, form reddish-brown granulations. 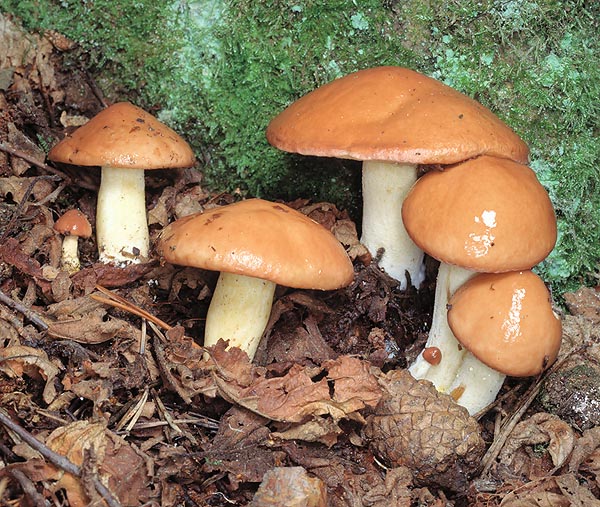 Stem: 4-11 cm, cylindrical, straight, full then hollow, for long time pale yellow, then more or less ochraceous; in the upper part, little under the hymenium, in the young fungus, are present exudations in form of droplets, similar to those of the hymenophore, which, with the time, dry up and leave some rusty-brown granulations, without ring and network.

Flesh: thick, often firm, then soft and spongy in the cap, it easily impregnates when the weather is wet, fibrous in the stem; whitish, light yellow close to the hymenium, unchangeable; light and pleasant smell, mild flavour.

Habitat: it grows in summer and autumn mainly connected to two needle Pinus but also under P. strobus and P. cembra, quite common and abundant.

Edibility: edible, only young specimens are to be eaten, previous removal of the cuticle.

Pileipellis: is formed by cylindrical and jellified hyphae, forming a trichoderm; then becoming a cutis of more or less intertwined hyphae.

Remarks: It is by sure a very common and much sought for species, known under the common name of: “pinarolo” in Italy, “bolet granule” in France, “boleto granulado”, in Spain.

It is an easily recognizable fungus provided attention is paid to some peculiar characters: the granulations, rather thick, present on the stem, the pores secreting opalescent droplets in the young fungi, the surface of the cap without fibrillae and the white basal mycelium. 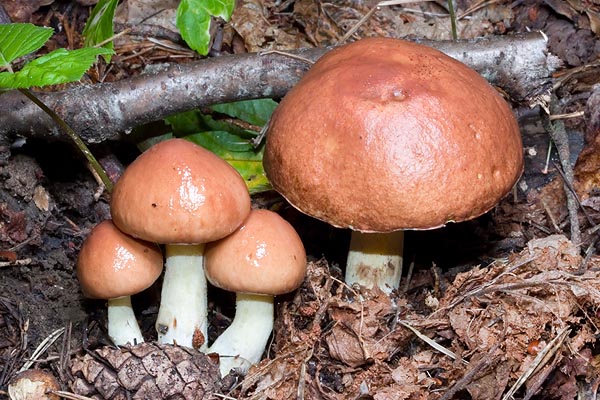 It may be mistaken with: Suillus collinitus (Fries) Kuntze, which, however, has the cap of a darker brown colour and has, on the cuticle of the cap, some dark radial fibrillae and pink basal mycelium; Suillus bellinii (Inzenga) Watling, which, however, has a paler, almost whitish, cuticle, especially in the young specimens, and the tubules slightly decurrent on the stem; Suillus mediterraneensis (Jacquetant & Blum) Redeuilh, which however has the cuticle with thin innate fibrillae and the colour which, when ripe, is olive-brown ochraceous, the flesh more markedly yellowish and with a prevalent habitat under the Pinus halepensis.