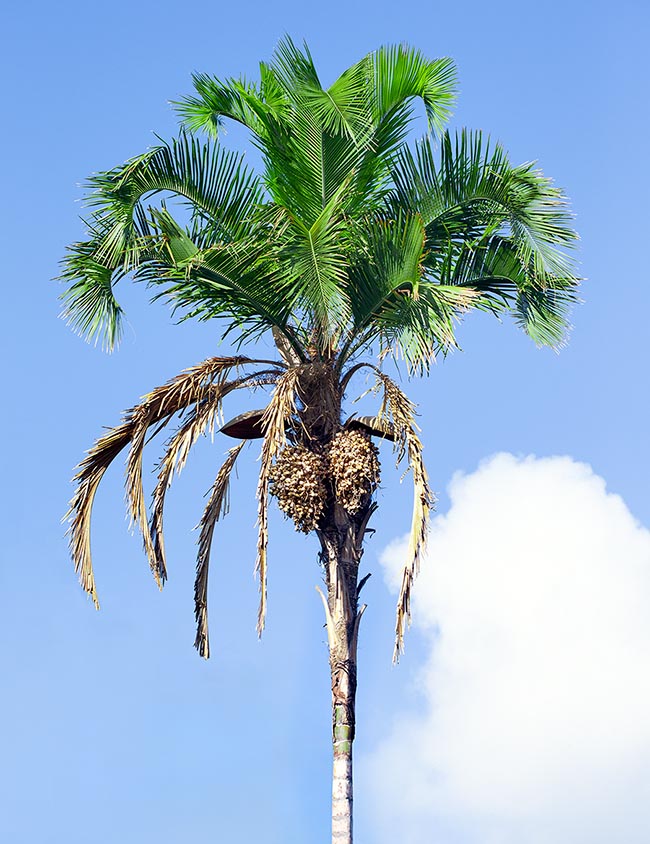 The Syagrus botryophora is native to the eastern coast of Brazil where can be 18 m tall with a diameter of 15-25 cm. Rich crown rather elongated because of the large number of leaves leaning one against each other in a fast growth. Elegant and strongly arched, with 80-150 pairs of linear acuminate leaflets, they can reach the 2-2,8 m of length © Giuseppe Mazza

The species is native to the eastern coast of Brazil (Bahia, Espirito Santo and Sergipe) where it grows in the Atlantic forest on clayey soils, from the sea level up to about 400 m of altitude.

The exact derivation of the generic name is unknown, the most credited hypothesis is that it comes from the name “syagrus” given by Pliny the Elder (23/24–79) to a variety of date palm; the specific name is the combination of the Greek substantive “βότρυς” (botrys) = bunch and of the verb “φορέω” (phoreo) = to bring, with possible reference to the compact infructescences.

The Syagrus botryophora (Mart.) Mart. (1845) is an unarmed monoecious species with solitary stem, erect, columnar, slightly enlarged at the base, up to 18 m tall with a diameter of 15-25 cm, of greyish colour and marked by the annular scars of the attachment point of the fallen leaves. The crown is rather elongated due to the number of leaves present at the same time, the growth speed and the distant internodes.

The leaves, on a 40-50 cm long petiole, are pinnate, strongly arcuate, 2-2,8 m long, with 80-150 pairs of linear leaflets with acuminate apex, regularly distributed and inserted in two levels along the rachis facing upwards to form a V, 40-70 cm long and 2,5-4 cm broad in the median part, of intense green colour above, paler below. The foliar sheath, 40-60 cm long, open on the opposite side to the petiole, displays fibrous margins.

Inflorescences, on a 15-30 cm long peduncle, between the leaves (interfoliar), 30-70 cm long, initially enclosed in a woody bract particularly thick, 50-70 cm long, with a long “beak” at the apex, of pale grey colour and striped externally, initially yellowish that turns purple internally. Ramifications of first order with white cream unisexual flowers arranged in triads (a female flower between two male ones), except in the terminal part of the rachillae (secondary ramifications of the inflorescence) where are present only male flowers solitary or in pair. 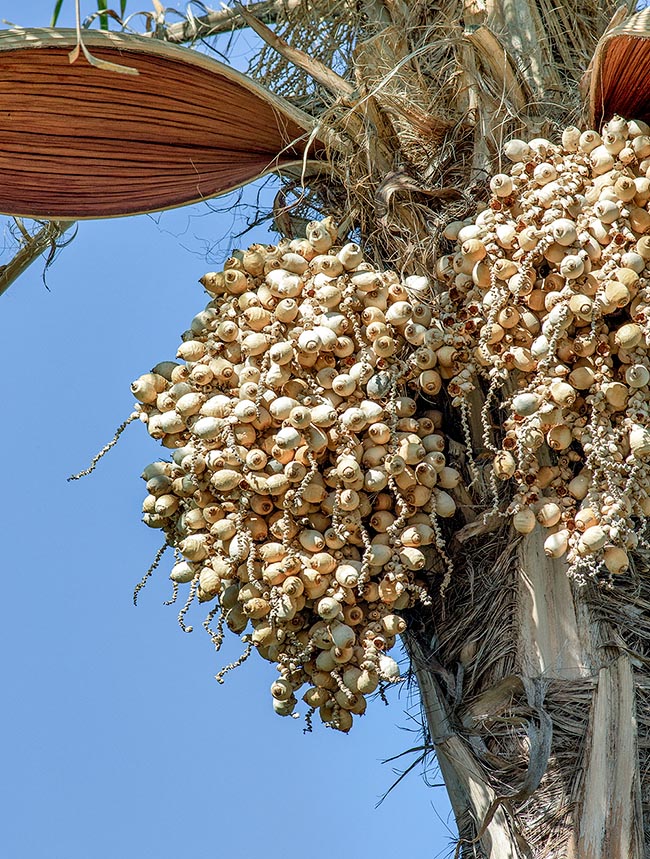 The woody bract of the inflorescence turns purple internally. The yellowish fruits, ellipsoid, 3,5-4,5 cm, are edible and from the seeds they get an edible oil. Endangered in nature due to the indiscriminate cut of the stems used in rural dwellings, has recently established in the gardens due to the fast growth and good resistance to cold © Giuseppe Mazza

It reproduces by seed, previously kept in water for 3 days, in draining loam maintained humid at the temperature of 26-28 °C, with germination times of 2-5 months.

One of the most elegant palms and of fast growth, from the moment when it characterizes the leaves, but that oddly has entered cultivation with ornamental purpose late and very slowly.

It prefers the tropical and humid subtropical climates, but adapts to the mildest temperate warm ones, where it can stand exceptional decreases of temperature just under the 0 °C.

It requires full sun or slight shades, in particular when young and is not particular about the soil, provided draining and maintained humid almost constantly, but it does not stand the intense winds that can put it down, therefore is not suitable to sites subject to strong wind storms.

The stems are utilized in the rural constructions and the fruits are edible and appreciated by some indigenous populations, from the seeds is extracted an edible oil of good quality.

Due to the deforestation caused by the expansion of the agriculture and the indiscriminate cut of the stems for the constructions, the natural populations are continuously decreasing, for such reason the species has been inscribed in the red list of the IUCN (International Union for the Conservation of Nature) as “Near theatened”.