The species is native to Bolivia and Brazil (Bahia, Goiás, Mato Grosso, Mato Grosso do Sul, Minas Gerais e San Paolo) where lives in the tropical savannah (“cerrado”) mainly on sandy and rocky soils, up to about 1000 m of altitude.

The exact derivation of the generic term is not known, the most accredited hypothesis is that it comes from the name “syagrus” given by Pliny the Elder (23/24 AD – 79) to a variety of date palms; the name of the species is the Latin adjective “flexuosus, a, um” = flexuous, with reference to the stems. 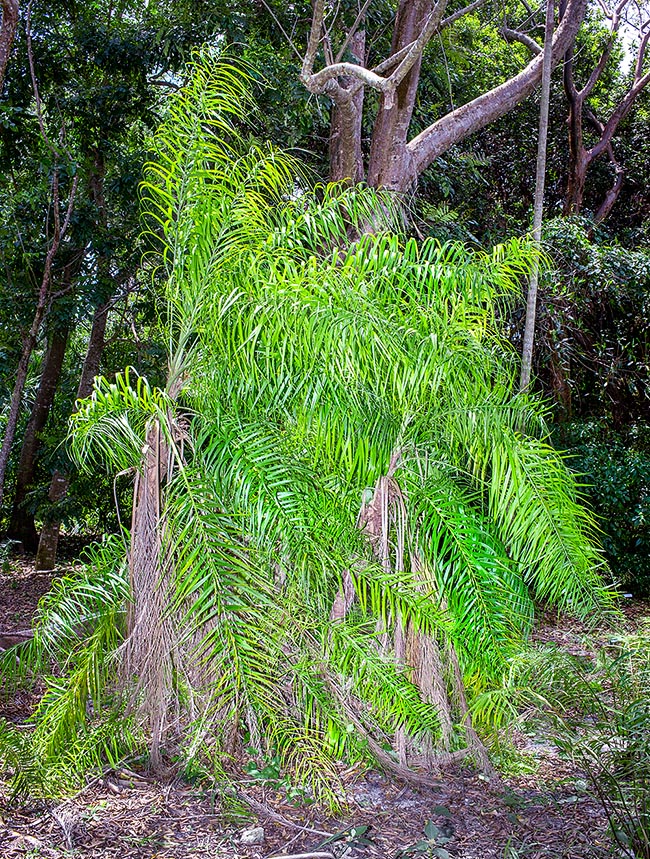 Native to Bolivia and Brazil, the Syagrus flexuosa is a cespitous palm, rarely solitary, with more or less bent stems of 3-5 m of height and of 5-8 cm of diameter. At first sight, it could be defined “uncombed” with its weary leaves, but backlight they become feathers of a nice intense green and waving at the wind they render this unsual disorder even attractive. Requires full sun and draining soils. Edible fruits but fibrous, very much appreciated by the local fauna © Giuseppe Mazza

The Syagrus flexuosa (Mart.) Becc. (1916) is an unarmed cespitous monoecious species, rarely solitary, with more or less curved 3-5 m tall stems and of 5-8 cm of diameter, covered in the youngest part by the residues of the foliar bases, greyish and vertically fissured in the oldest part.

The leaves are pinnate, slightly arcuate, 1-1,2 m long, with 50-80 couples of linear leaflets, rather rigid, arranged on the rachis in groups of 2-5 on various angles, in the central part 30-35 cm long and 1-1,5 cm broad, of intense green color; the foliar base, 30-50 cm long, with fibrous margins, wraps the stem for about one half.

Inflorescences, on a 20-30 cm long peduncle, between the leaves, 40-80 cm long, of pale yellow color, initially enclosed in a woody spathe, with ramifications of first order and unisexual flowers arranged in triads (one female flower between two male), but in the terminal part of the rachillae where are present only male flowers solitary or in couple.

It reproduces by seed, previously kept in water for 3 days, in draining loam maintained humid at the temperature of 26-28 °C, with germination times from 4 to 10 months.

Diffused in the origin area, but poorly present elsewhere, of slow growth and appearance at times disorderly, cultivable in the regions with climate tropical, subtropical and marginally warm temperate, where may bear for short time temperatures up to about -3 °C. Requires full sun and draining soils, preferably acidic or neutral, bears short drought periods, but grows faster if regularly irrigated when in presence of high temperatures.

The leaves have a limited use in the local artisanship. Edible fruits, but with particularly fibrous pulp, very appreciated by the local fauna.