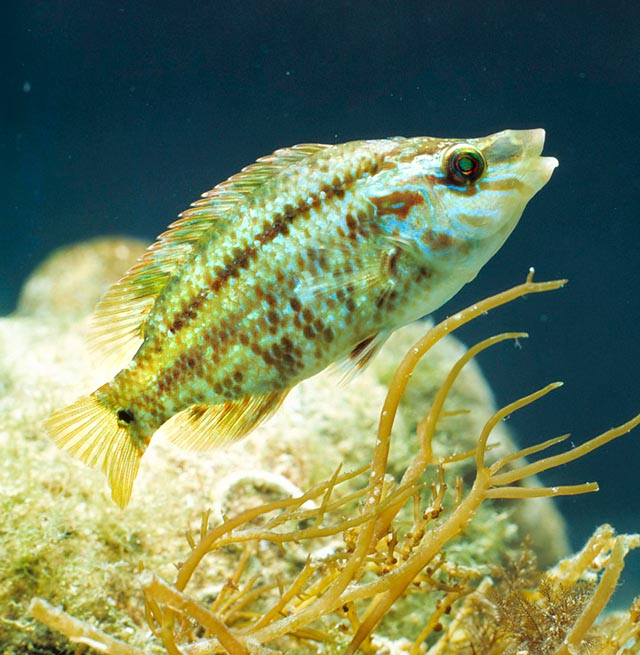 The Five-spotted wrasse (Symphodus roissali Risso, 1810) belongs to the class of Actinopterygii, the ray-finned fishes, to the order of Perciformes and to the family of Labridae.

The name of the genus comes from the Greek “syn” = together and “odous” = teeth, therefore, teeth grown together, which are almost unseen, hidden by the gingival tissue and by the lips.

The name of the species “roissali” means “Roissal’s”; that is, it was honoured to the Niçois painter Clément Honoré Claude Roassal, called also Roissal (1781-1850).

The five-spotted wrasse is present all over the Mediterranean, Black Sea included, but even beyond the Gibraltar Strait, on the Moroccan, Spanish Atlantic coasts as well as on the French ones up to Brittany.

It lives, solitary, in shallow waters, in the backwash zone at less than one metre of depth, even if, at times, it can be found in deeper waters. Being frightful, it loves the rocky coasts, full of ravines, but it does not ignore completely the seagrass meadows. More than swimming, it spends the day moving quickly from a hiding place to another. 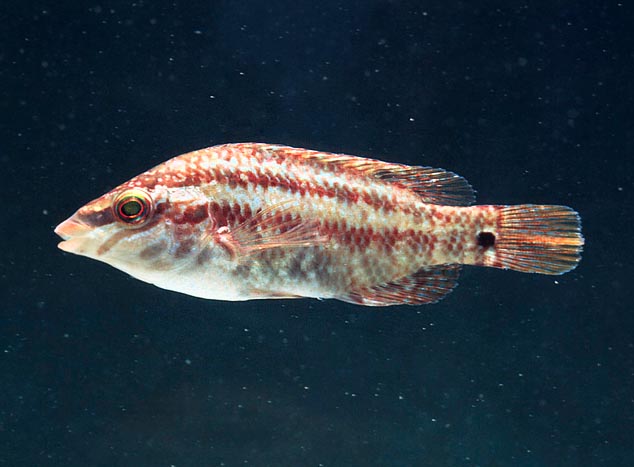 Usually, the males measure from 8 to 12 cm, but they have caught specimens even of 15-17 cm. The females are smaller.

The body is much higher than that of the Symphodus ocellatus .

The head is conical, with little retractile mouth and upper jaw slightly longer.
The operculum has a cutaneous tiny tongue.
The colour varies depending on the sex, the size, the season and the environment, but there are no rules.

In fact, in the same spot and in the same season, we can see, at the same time, irrespective of the size, the most disparate colours.

Most of the specimens show a reddish livery, but in harmony with the Italian name (“tordo verde” = green wrasse), which recalls the green colour, there are also several olivaster ones, and some of them are even of an emerald green colour.

The dark spots remain, forming, more or less, two bands on the sides, but also these ones may disappear or suddenly intensify, depending on the mood of the fish and like Symphodus ocellatus, there is a dark spot in the middle of the caudal peduncle. 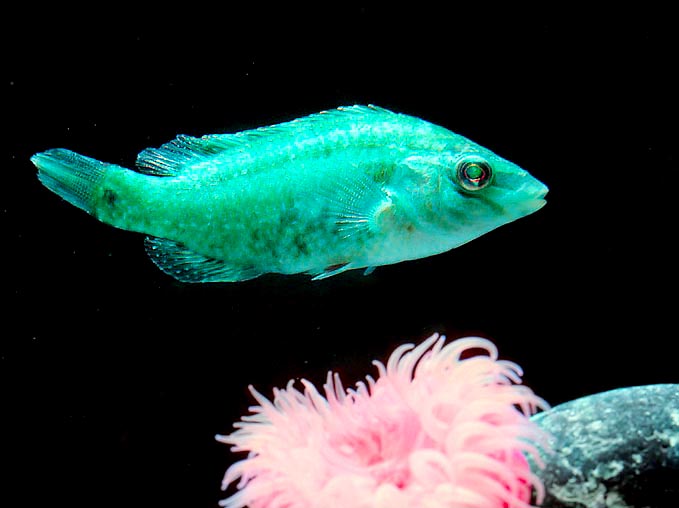 The five-spotted wrasse nourishes mainly of molluscs, annelids and crustaceans, but also of bryozoans and echinids.

By the beginning of summer, as for the Symphodus ocellatus , the males build some small nests, cup-shaped, with seaweeds and sand.

Usually, they work during the warmest hours of the day at only 15-70 cm of depth, often contenting them of completing, with some vegetal shred mixed with sand, the suitable troughs they discover between the rocks.

The eggs are sticky. The male fecundates them and then stands the watch till the hatching, with the head up in an oblique position, ventilating them with the tail for ensuring better ventilation.

It has been noted that the five-spotted wrasses are very attached to their small territory, of which they know resourced and hiding places and often they maintain it for one year. The vulnerability index of this species is of 31 over 100.

Symphodus roissali was last modified: May 3rd, 2022 by Giuseppe Mazza