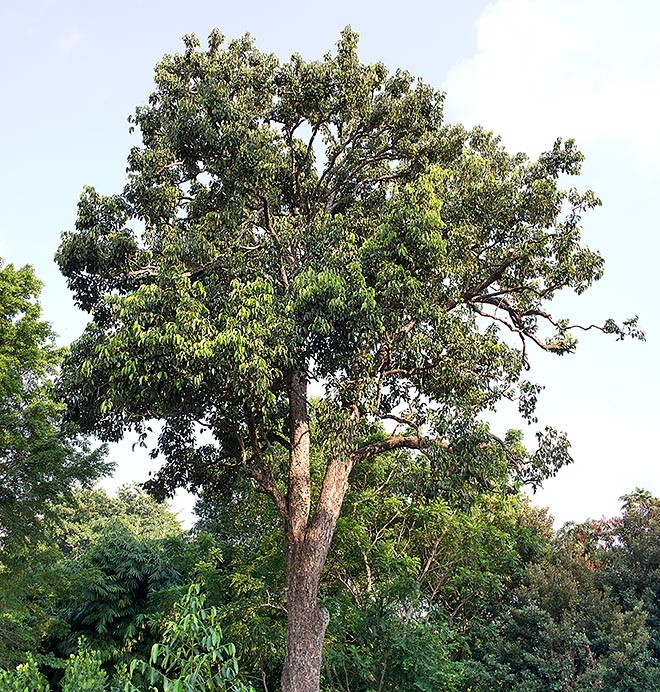 The species is native to Andaman Islands, Assam, Bangladesh, Borneo, Cambodia, China (Chongqing, Guizhou, Hubei, Sichuan and Yunnan), India, Laos, Peninsular Malaysia, Singapore, Sri Lanka, Sumatra, Thailand and Vietnam where it mainly grows in the coastal forests, often representing the dominant species, on rocky and sandy soils, in a lesser extent in the hinterland in the swampy forests and along the water streams, up to about 700 m of altitude.

Tha name of the genus is the combination of the Greek terms “σύν” (syn) = together and “ζύγον” (zygon) = yoke, with reference to the petals merged in some species; the specific name is the Latin adjective “grandis, e” = big, extraordinary, with obvious reference.

The Syzygium grande (Wight) Walp. (1843) is an evergreen, 10-30 m tall, tree with erect trunk, rather enlarged at the base, with greyish bark fissuring vertically and descaling with the age. The leaves, on a 1-1,5 cm long petiole, are simple, opposite, coriaceous, 10-20 cm long and 4-8 cm broad, ovate-elliptic with entire margin and pointed and curved apex, crossed by 16-20 lateral parallel venations, prominent, that converge into one venation little far and parallel to the margin of the leaf, of glossy dark green colour above, paler below.

Inflorescences in terminal corymbose panicles or at the upper axils of the leaves, 10-15 cm long, carrying numerous hermaphroditic flowers, of 1,5 cm of diameter, particularly fragrant of white-yellowish colour, with 1,2 cm long calyx, with 4 unequal ovate lobes, about 0,5 cm broad, overlaid, corolla with 4 orbicular petals, 0,5 cm broad, numerous white-cream stamina, 1,2-1,5 cm long, the most striking part of the flower, and about 1,2 cm long style. The fruits are globose to piriform berries, 2-4 cm long and of 3 cm of diameter, of green colour, containing only one globose seed of 2,5 cm of diameter, food preferred by birds, bats and monkeys that contribute to the dispersion of the seeds.

It easily reproduces by seed, to be interred as soon as possible, in draining organic loam maintained humid at the temperature of 24-28 °C. Fast growing species suitable to the tropical and humid subtropical climate zones where it is at times utilized, due to the ornamental foliage and blooming, in parks and gardens and as road tree. 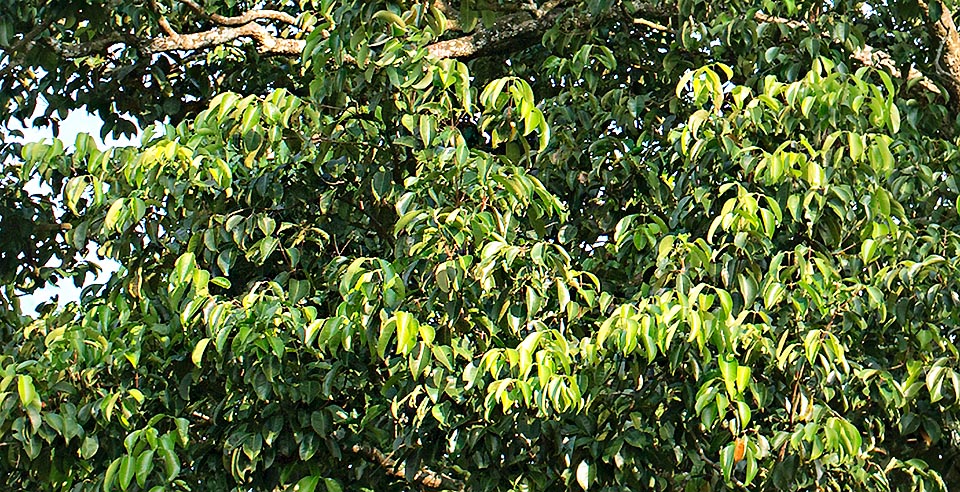 Dense boughs with ovate-elliptic leaves. Due to the high resistance to fire is often used in the roads as fire barrier. Medicinal virtues © Giuseppe Mazza

It requires full sun and is not particular for what the soil is concerned, even if poor, acidic to neutral; it bears saltiness and consequently can be employed close to the sea. It has a high resistance to the fire and for this used, especially in the past, in the roads as barrier against the fires at the borders of areas having a highly flammable vegetation .

The wood, heavy, moderately hard and easy to work, is utilized in the constructions, for floors, panels, partitions and fixtures, in the boats, in the fabrication of furniture, handicrafts and plywood. Parts of the plant are locally utilized in the traditional medicine for various pathologies.