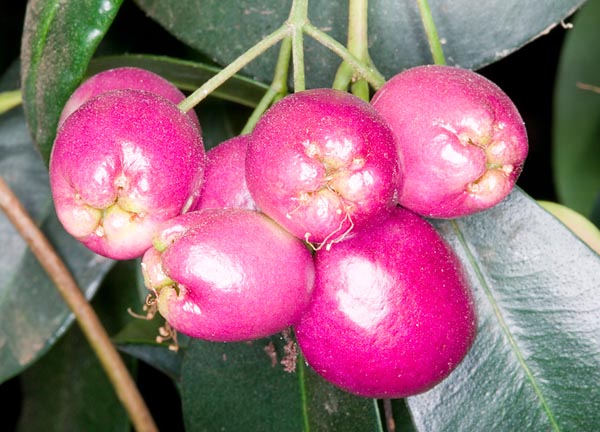 This species is native to the eastern coasts of Australia (New South Wales and Queensland), where it grows in the tropical and subtropical forests and in the humid sclerophyllous forests.

The Syzygium oleosum (F.Muell.) B.Hyland (1983) is a shrub or a small evergreen tree, up to about 10 m tall, with a reddish brown wrinkled bark and a pyramidal shaped crown, thick to the base.

The leaves, on a 2-10 mm long petiole, are opposite, of an intense glossy green colour on the upper page, pale green below, elliptic or lanceolate with tapered and pointed apex, 3-12 cm long and 1-4 cm broad, very much aromatic when wrinkled due to the presence of several oleiferous glands which are visible against the backlight; the young buds have a bronze colour. The inflorescences are in axillary cymes concentrated in the terminal part of the branches carrying white flowers with 4 ovate petals, concave, 2,5-3,5 mm long, with numerous pointed oleiferous glands and 5-16 mm long stamina. The fruits are globose, of 1-2,5 cm of diameter, of a colour varying from the pink to the glossy bluish purple, with a cavity containing only one seed of 0,5-1 cm of diameter.

It usually reproduces by seed, in sandy and organic soil, which germinates in 2 to 6 weeks at the temperature of 22-24 °C or by cutting. Species suitable to zones with tropical, subtropical and marginally temperate warm climate, where can resist to temperatures as low as about -3 °C; the adult plants may resist, with damage to the foliage, even to some degrees less. It requires an exposition in full sun or slight shade and, for what the soil is concerned, is not particularly demanding, even if preferring the draining fertile and humid soils, but, when well rooted, it can bear dry periods.

Thanks to its fast growth, the thick and elegant foliage, to which we have to add the long lasting flowering, it is often utilized as border barriers, also as windbreak; from some years it is commercialized in pot as plant for indoor spaces decoration, where it reveals particularly resistant, more than the classical Ficus benjamina, to which, in a certain way, it resembles.

The fruits have a pleasant taste, even if it is rather variable from zone to zone, and are consumed fresh or utilized for drinks and preserves.