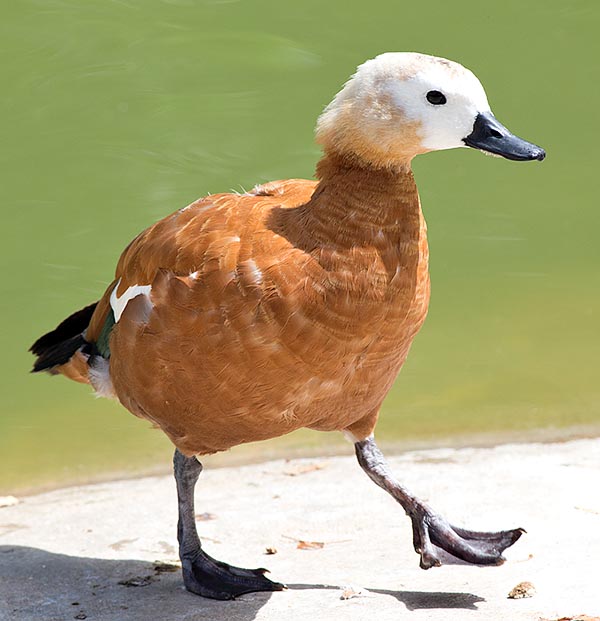 The Ruddy shelduck (Tadorna ferruginea Pallas 1764) belongs to a group of ducks with a rather homogenous shape and with medium size which make it resembling as a middle way between a duck a goose.

It belongs to the order of the Anseriforms (Anseriformes), to the family of the Anatids (Anatidae), to the genus Tadorna (which includes the ducks called “common shelduck” as well as those called “ruddy shelduck”) and to the species Tadorna ferruginea.

The name of the genus “tadorna” comes from the Latin and means “aquatic dappled bird” referring to the well divided and neat different colours present n the liveries of many species belonging to this genus even if this is not the case of the ruddy shelduck which has one predominant colour.

The name of the species “ferruginea” comes from the Latin and refers to the colouration of the livery of this duck which is almost totally orange-rust.

It is migratory in some zones (especially in the Asian home range), vagrant in others, at times sedentary, sporadic in Italy. It winters in North Africa, Asia Minor, Middle East and in low number in Europe (mostly in Greece and Spain). Many European sightings are referred to animals escaped from the captivity being the species commonly detained and reproduced by amateur breeders.

The species is seen frequenting coastal humid zones such as lagoons, river mouths, deltaic areas and salt marshes as well as internal aquatic environments such as lake basins of various dimensions, rice fields, swamps and ponds. It has gregarious habits and adapts to many different habitats. It frequents also the hinterland such as countries, steppes, highlands and mountain regions (reaching the 5000 metres of altitude in the Himalaya). In the inner zones it depends less from large bodies of water being content of small water streams. 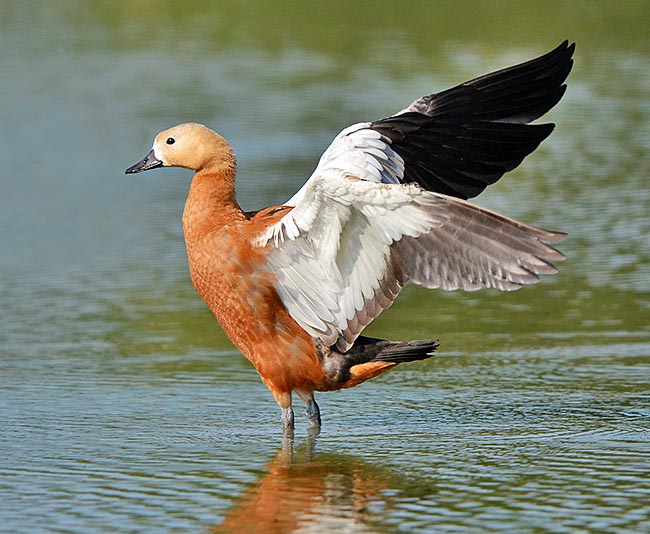 Thanks to its very peculiar colouration, is unmistakable in respect to other species; also from far away it can be mistaken with the Egyptian goose (Alopochen aegyptiacus).

Anatid with “goose” appearance with relatively small beak, general colouration of the livery orange and rusty.
Its size is similar to that of the common shelduck (Tadorna tadorna) but with neck and legs slightly longer, longer (and rather thin) wings and smaller beak.

The sexes, even if similar, can be distinguished between male and female also by the different vocalizations; the male emits duller and blown cries contrary to the female which emits more acute and squawking vocalizations. These resemble the noise of the car horn and are characteristic and nasal reminding those of the wild goose (Anser anser). From far away, resemble the braying of the donkey (Equus asinus).

This duck has a total length of about 58-70 cm, wingspan of about 115-145 cm and a weight fluctuating between the 920 and the almost 2000 g. The body, as we said, is of brown-orange colour; the head is more nuanced of light (cinnamon-honey colour).

The male has a usually thin, of variable width, black small collar turning around by mid neck. The primary rectrices, the distally secondary rectrices and in the ventral part, the tail, the rump (also slightly on the side) are black. The lower abdomen and the undertail are red-darker brick. The dorsal feathers of the zone before the black overtail (which presents dark green reflections) are finely vermiculated of pale-red ad black-brown. The secondary feathers, dorsally, are brown-black-violaceous and form a green speculum, ample when the bird is flying. The alar dorsal coverts are white suffused of very pale yellow-fulvous colour. 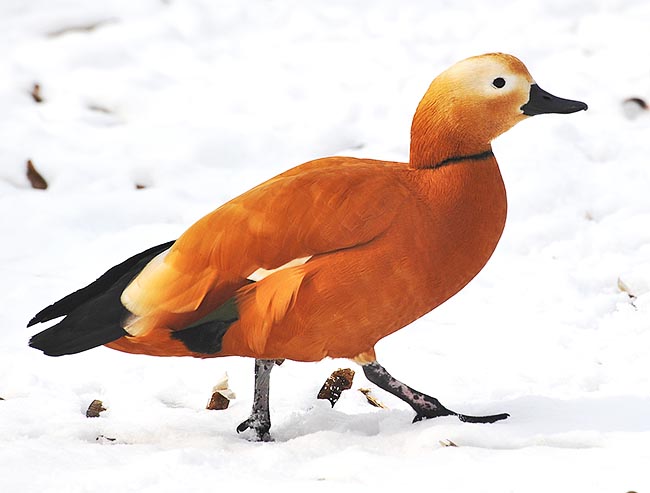 The male, especially in the reproductive time, has a small black collar © Gianfranco Colombo

The coverts of the under wing are white. The beak (about 39-45 cm long, against the 44-58 of the Tadorna tadorna) is totally black with rather high vertical junction (which renders it similar to that of the geese). Both rhamphothecae present numerous denticles; those of the upper one are slightly protruding. The legs (with about 54-62 mm long tarsi, against the 46-60 mm of the Tadorna tadorna) are black. The female has similar colouration to the male, but with less orange hues, does not have the black small collar and around the eyes the feathers are white conferring-creating a more or less expanded white periocular spot, but always evident. In the post-reproductive liveries, the female does not show great variations whilst in the male is absent, or is strongly reduced the black small collar of the neck.

The juveniles have a colouration similar to that of the female, but duller and with darker upper parts. Vertex and back part of the neck are grey-dark brown. Beak and legs like the adults.

It flies with decided but slow and ample wing beats which render it recognizable also when in flight. It often flies at considerable heights. The species does a gradual and complete post-reproductive moult and during 4 weeks, which will fall between mid-July and September, will not be able to fly. The nuptial plumage will be complete by March-April. It has various and adaptable (omnivorous) alimentation: molluscs, crustaceans, small fishes, aquatic worms, amphibians, and insects; but does not disdain even algae, aquatic plants, buds, seeds, cereals and agricultural crops, berries and other. It reproduces in a huge variety oh habitats: on the banks of rivers and lakes, in sandbanks, but also in hills and mountains even if relatively far from the water. The pair bond is very string and is usually lasting.

It's a migratory, vagrant or sedentary species identifiable in flight by the decided, slow and ample wing beats © C.

The nest is preferably realized inside cavities in trees, rocks, abandoned dens, banks or ruins and therefore can be placed even elevated from the ground (up to 10 metres of height).

In some natural reserves the species has benefitted and has increased thanks to the placement of closed artificial nests (nest boxes).

Usually, 7-12 white eggs with smooth shell are spawned; the hatching, done only by the female, lasts about 30 days. Both parents attend to the brooding with determination. The ducklings have white-black mottled colouration, and are very similar to the pullets of the common shelduck (Tadorna tadorna) but with vertex and upper dark parts slightly more faded.

They are generally missing of the white-spotted eyebrow (or this is less evident-extended). The iris is brown, the beak grey-black and the legs blackish. The ruddy shelduck, with an estimated population of 170.000-220.000 individuals, is not, for the moment, particularly endangered. The dangers for this duck are however given by the hunting, especially in south-eastern Europe, the loss of humid habitats, the urban development, the pollution, and by the introduction of allochthonous fish species.

The ruddy shelduck crosses, and consequently hybridizes, rather easily with other species belonging to the genus Tadorna. This is to be kept in consideration for avoiding escapes of shelducks, allochthonous, in important natural areas for possible resident ducks belonging to the same genus in order to avoid problems of genetic pollution.