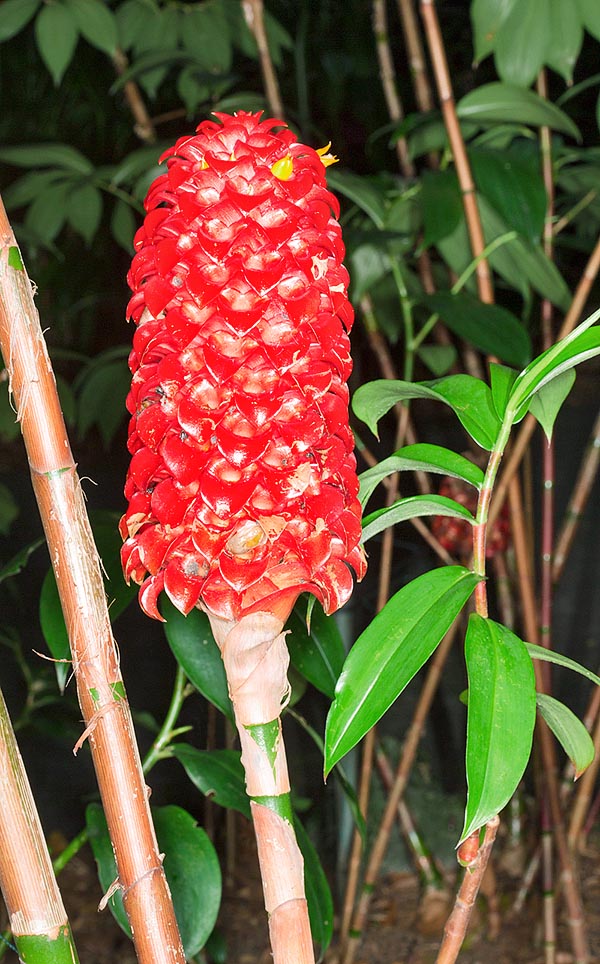 The species is native to Australia (Queensland), Maluku Islands and New Guinea, where it grows in the pluvial forests from the sea level up to about 700 m of altitude.

The name of the genus is the combination of the Greek terms “tapeinos” = modest and “cheilos” = lip, with reference to the small labellum; the Latin name of the species refers to the resemblance of the inflorescence with the pineapple (Ananas comosus).

The Tapeinochilos ananassae (Hassk.) K.Schum. (1899) is a perennial, evergreen, rhizomatous, herbaceous species, up to more than 2 m tall with stems departing from the underground rhizomes, initially erect, semi-woody and without leaves, then herbaceous and spirally curved at the extremity and provided with leaves radiating outwards.

The leaves are simple, from elliptic to oblanceolate, with entire margin and pointed apex, coriaceous, of glossy dark green colour, usually 10-30 cm long and 4-8 cm broad, subsessile (almost without petiole) and with tubular foliar base wrapping the stem.

Spike inflorescences, on an erect floral scape, 0,3-1 m long, departing directly from the rhizome, of almost conical shape, which continue to get longer for 1-2 months, as they may reach a length of about 25 cm, formed by waxy, ovate, imbricate bracts, with curved and pointed apex, about 4 cm long and 3 cm broad, of bright red colour, on whose base develop the bisexual flowers just longer than the bracts.

The flowers, about 5 cm long, are subsessile with red tri-lobed calyx and yellow tri-lobed tubular corolla with one fertile stamen and 5 staminodia joined together forming a sort of a labellum united at the base of the corolla and longer than this one; at times the inflorescences are surmounted by a small stem equipped with leaves. The fruits are capsules containing black seeds having a translucent aril.

It reproduces by seed, previously kept submerged in water for 1-2 days, in organic soil with addition of coarse siliceous sand or perlite, kept humid, at the temperature of 24-26 °C, with germination times of about 6 weeks and first flowering after 3-4 years in the best conditions of cultivation; more frequently, it reproduces by division and through the short lateral branches that can be detached and treated as cuttings.

Species with luxuriant and spectacular long-lasting foliage, exclusively suitable to tropical and humid subtropical climates, to be utilized in mass, as underbrush or for informal borders, in shade or filtered sun and sheltered from the winds; temperatures around the 0 °C, even if for very short period, may aver fatal, as well as long periods with temperatures below the 10 °C. 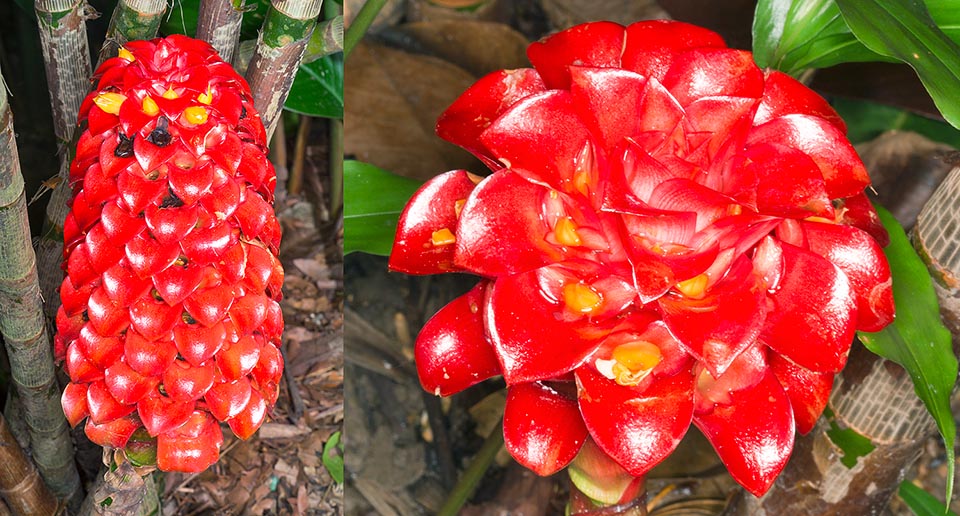 It requires high ambient humidity, around the 80%, and in the soil that must be much draining in order to avoid water stagnations which may easily cause rooting rottenness.

Elsewhere, it can be cultivated in luminous and humid ambient utilizing capacious containers, seen its vigorous growth, with light soil, preferably acidic or neutral, rich of organic substance, with addition of coarse siliceous sand or perlite; the waterings and fertilizations must be regular in summer, in winter the waterings may be reduced, but without ever allowing the substratum to completely dry up, with lowest temperatures never less than 15 °C and, as an average, over the 20 °C. The cut inflorescences are frequently utilized in the floral compositions.