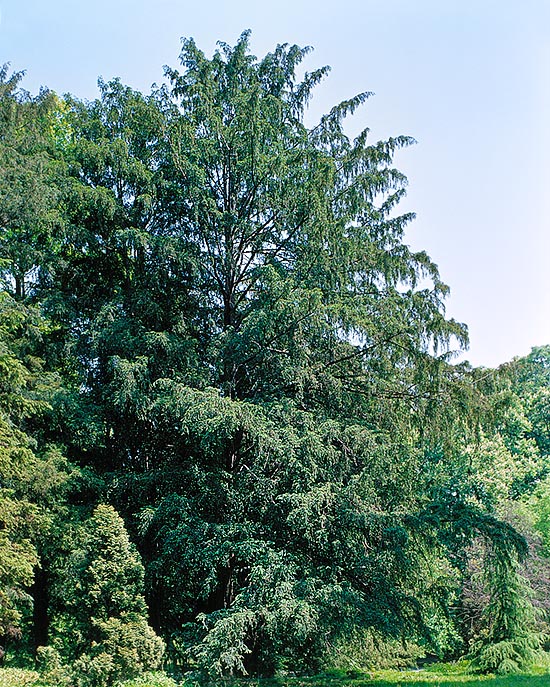 Taxus baccata growth is very slow, but exceeds the 20 m of height and the 2000 years of age © Giuseppe Mazza

The genus Taxus includes about ten species (for some authors considered as geographic species) of trees and shrubs of the northern hemisphere.

The Yew (Taxus baccata L. 1753) has a palaeotemperate distribution (Euro Asian range in a broad sense and North Africa); it includes most of Europe excluding the extreme north, to the south, Algeria and, eastward, up to Iran.

Its range has much reduced during the centuries due to the intense cuttings performed in the past for the prized wood, very elastic and resistant, suitable for making bows and arrows, but also due to its toxicity, serious danger for the grazing animals, in particular, bovines and horses and for the cervids. The horses can quickly die after an ingestion of 100-200 grams of fresh leaves of yew.

The etymology of the name of the genus Taxus is still under discussion: after some it should come from the Greek “taxon” meaning “poisoned arrow”, and the name of tree of death rightly comes from its employment in the fabrication of poisonous darts and from its remarkable toxicity, besides the fact that it was utilized as tree in the cemeteries; after others from the Greek “toxon”, poisonous; others yet affirm that it refers to the Greek “taxis”, that is, row, for the regular disposition of the leaves on the branches like a double comb.

The name of the species baccata means “made of pearls, of berries”, for the many fruits produced by the female trees. The yew, or tree of death, is an evergreen tree, not resiniferous, very long-lived (up to 2100 years of age) with very slow growth, of third magnitude, on average 10-15 metres high, at times up to 20 (<22) metres, developing remarkable diameters of the trunk.

It is an often polycormic tree, that is with more trunks coming out from the base, and with shrubby deportment, with long spread apart and alternated main branches, forming an ample and diffused top of ovate-pyramidal shape. The trunk, often irregular and ribbed, has red-brown to grey-blackish bark, initially smooth but that, with the age, peels off in thin and irregularly polygonal plates or in more or less patent or curled stripes. It has a robust, expanded but not too deep rooting system.

The oldest Italian specimen is located in Sardinia, in the locality Marzari, Urzulei, province of Nuoro, for which they have estimated an age of 2000 years, is 15 m tall and the circumference of the trunk is of more than 5 m. 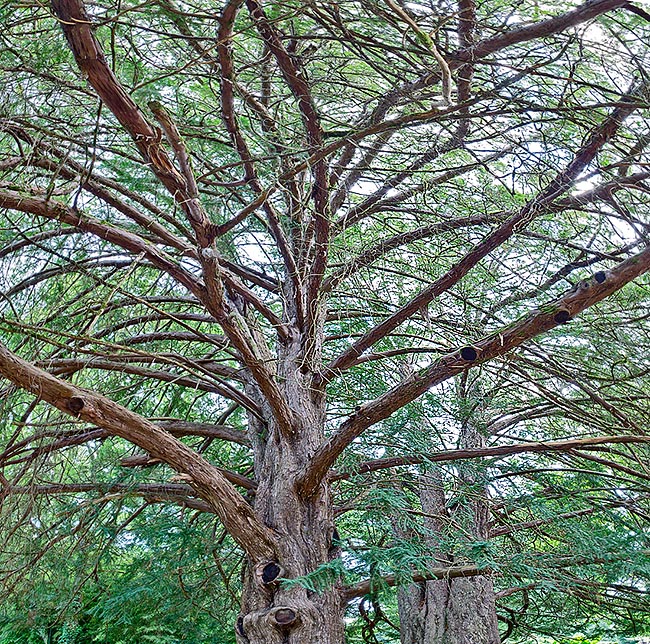 Often polycormic, bushy, has a typical red-brown trunk which peels off © Giuseppe Mazza

It is a dioicus plant with leaves arranged in two opposite ranks, on irregularly alternate small branches, dark green on the upper page, and paler below, green-yellowish, for two belts of stomata, with non rigid lamina, flattened, linear or little falcate, of 2 x 15-25 (35) mm, with margins replied below, glossy above, acute but not pungent.

In March-April (May) the male plants emit clouds of pollen which is entrusted to the wind (anemophilous pollination). The male organs are many, formed by small axillar amenta, globose, yellow, with 5-8 peltate scales; the female ones, solitary or paired, gemmiform, with semi-naked ovule, placed under the small branches, with fruits ripening in one year, are arils of 6-7 mm, with only one seed, ovoid, hard, brown-yellowish to green-dark brown, poisonous; the mucilaginous pulp (urceole) is scarlet red (yellow in the variety lutea) has the shape of a cup, is the only part of the tree not having poisonous substances and has a just sweetish taste.

In the wild, the yew loves, often together with the holly, the beech woods and the fir-shaded woods, preferably on calcareous soil from (300) 800 to 1600 (1800) m of altitude. Mesophilic species (heliophilous to scaphilous), requiring high atmospheric humidity and fresh, even calcareous and superficial, soils. It is an often cultivated tree in parks, gardens and cemeteries. Several species of birds are greedy of its berries and ensure the dissemination.

Several cultivars of Taxus baccata differ because of the habitat, foliar characters and colour of the berries pulp. Seen the compactness of the foliage, the longevity, the resistance to the diseases, the pollution and to the repeated prunings, it is widely cultivated in the big parks and in the Italian gardens where, through the topiary art, is constricted in the most different forms. 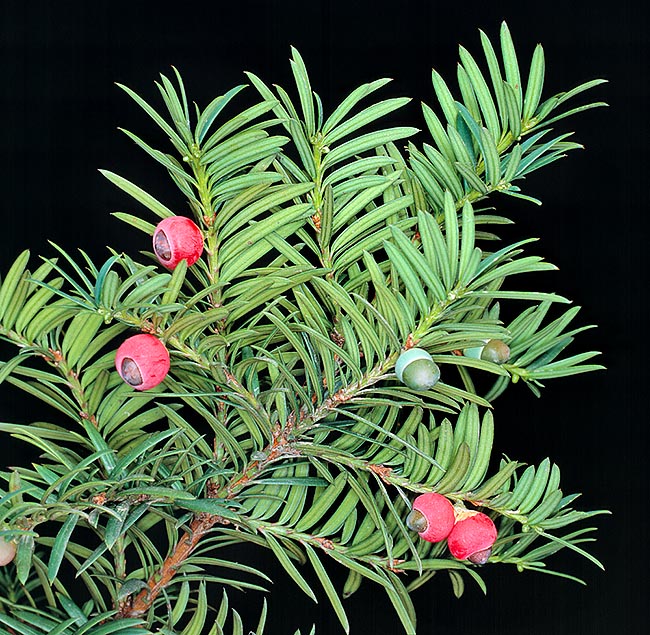 All plant, but the fruits, is poisonous. Dioicus species, has male and female specimens © Giuseppe Mazza

The yew was much diffused in the pre-historical times, is considered as a relict species of the pre-existent flora of the Quaternary glaciations (Arctotertiary relict), and later on regressed due to the worsening of the climatic conditions. In central and northern Europe it is diffused in the planitial vegetation, whilst in the southern regions tends to retreat in the mountains preferring ravines, streams gorges, steep sides of shaded valleys, especially on carbonatic substrata. The reproduction can be done by seed (which sprouts only during the second year from the sowing) or, for the varieties, by cutting or layering. It takes 200 years for reaching its complete development.

The wood of the yew has thin laburnum, white-yellowish and duramen of colour varying from the brown-orange to the red-purplish, with thin and well distinct annual rings; it is heavy (density 760 kg per cubic metre), very hard, homogenous and very fine-grained, sometimes speckled, strong and elastic, resistant, durable and consequently much appreciated for turnery and in cabinetry; if treated with iron salts it becomes black like ebony.

The early humans used this wood for making silts, besides pikes, spears, bows and arrows (the bow of the famous Hausblach mummy and the handle of the axe were rightly gotten from a branch of yew). The long and famous English bows used also in the battle of Agincourt, which marked the end of the French feudal cavalry are made with wood of yew. The old Egyptians were getting from it tables for realizing their sarcophagi. In the old Rome, they sacrificed to Hekate, goddess of the underworld, black bulls garlanded with leafy branches of yew, tree consecrated to her.

The plant is linked to the symbolism of the underworld and this is witnessed by Ovid; after whom the way taking to the world of the dead is shaded by yews. The association with the death gets inspiration in the deep green colour of the leaves, from the bark and from the reddish wood and especially from its toxicity. Due to the evergreen foliage and the longevity, this tree (as well as the cypress) has become symbol of immortality. 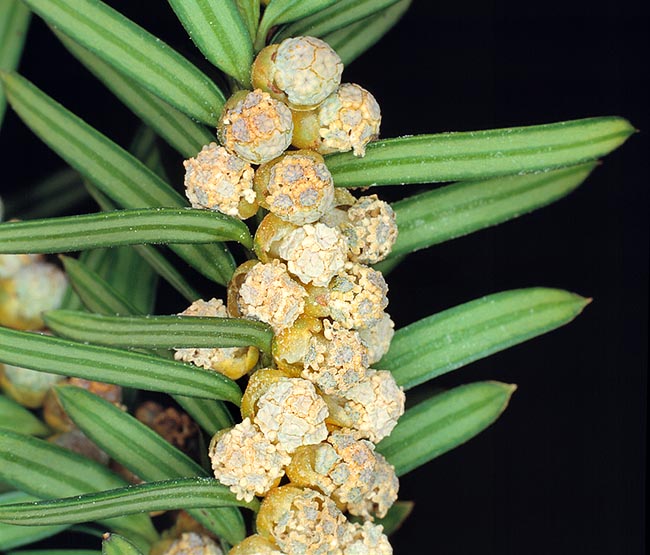 All parts of the plant, but the pulp of the fruits, contain the taxine, toxic terpenic alkaloid with anaesthetic-narcotic action capable to cause asphyxia and cardiac paralysis, besides the glycosides taxicantin and taxiphyllin, the alkaloids milossine and ephedrine, the biflavonoids ginkgetin and sciadopitisin.

In the past, its preparations were used as cardiotonics, antiepileptics, antiasth- matics, antirheumatics, purgatives, emmenagogues and abortifacients but due to the strong toxicity their employment has been abandoned. The poisoning causes choleriform vomit and diarrhoea, nervous alterations such as mydriasis and visual acuity, depression, dyspnea, hypotension, bradycardia and, finally, convulsion, cardio-vascular collapse and coma.

Despite its extremely strong poi- sonousness, the taxol, extracted from the bark of Taxus brevifolia, has proved effective to treat various types of carcinomas (breast, lung, ovary, melanoma and leukemia) by inhibiting the cellular division (mitosis). Taking inspiration from the chemical structure of the taxol, potent antitumoral but hard to get, the researchers are trying to produce a family of synthetic medicines of equal efficacity. Used for treating also patients with carcinomas of the region head-neck, of the prostate, of the advanced forms of Kaposi’s sarcoma, the taxol is nowadays utilized also for preventing the restenosis (narrowing of the coronary artery). The commercial preparation (Palitaxel) has been recently replaced by the Docetaxel, semi-synthetic, extracted from the leaves of Taxus baccata and particularly effective in caring the metastasized mammary cancer resistant to the anthracyclines.

The pulp of the aril (carefully freed from the seed and from possible leaves and other green parts residuals) rich of mucilaginous substances is employed in the popular medicine as resolvent in the bronchial ailments. 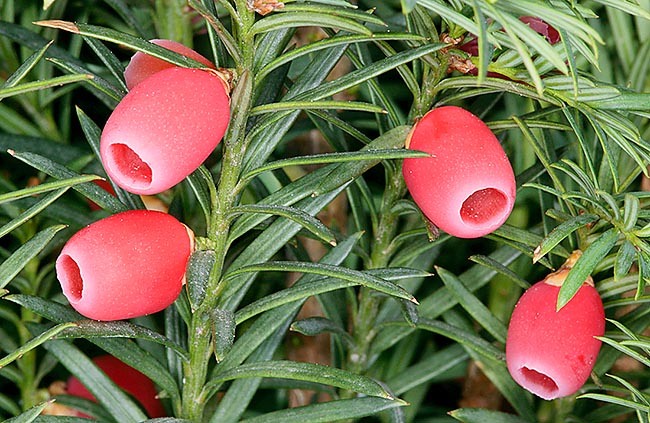 The females await it with gemmiform structures, solitary or paired, which in one year produce red 6-7 mm <br />arils with one seed only. The wood is heavy, very hard, homogeneous and fine-grained © Giuseppe Mazza

The females await it with gemmiform structures, solitary or paired, which in one year produce red 6-7 mm
arils with one seed only. The wood is heavy, very hard, homogeneous and fine-grained © Giuseppe Mazza

→ To appreciate the biodiversity within the TAXACEAE family please click here.