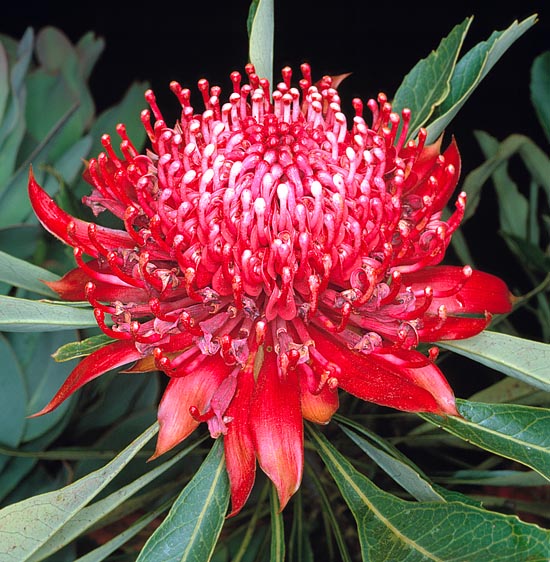 The species is native to south-eastern Australia where it grows in the thickets or open forests, mainly on the Blue Mountains west of Sydney, on sandy soils from the sea level up to about 1000 m of altitude.

The name of the genus comes from the Greek “telopos” = visible from a distance, with reference to the showy flowers; the name of the species is the superlative of the Latin adjective “speciosus, a, um” = beautiful.

Globose terminal inflorescences of 8-12 cm of diameter formed by a crowd of flowers with tubular perianth of bright red colour, opening in succession from the base towards the centre, subtended by pink or bright red bracts, 5-7 cm long; the birds are the main pollinators, attracted by the abundant nectar produced, carrying the pollen from one plant to another, the species is self-incompatible and needs therefore a crossed fecundation.

The fruits are dehiscent (which open spontaneously when ripe) follicles, 8-15 cm long, brown, containing two rows of seeds rather flat provided with a 2,5-3,5 cm long and about 1 cm broad wing, which favours their dispersion by means of the wind. It resists to the fire, thanks to the presence of the lignotuber, upper part of the root, enlarged and lignified, which allows the plant to regenerate after the fires. It reproduces by seed, without any particular pre-treatment, which must be fresh in order to have a high capability of germination, in coarse siliceous sand, sterilized and kept humid, preferably in single containers in order not to disturb the rooting apparatus sensitive to the transplants, with germination times of 3-6 weeks and first blooming usually starting from the fifth year of age; reproducible also by semi-woody cutting in summer, in siliceous sand, with the first flowering after two years. 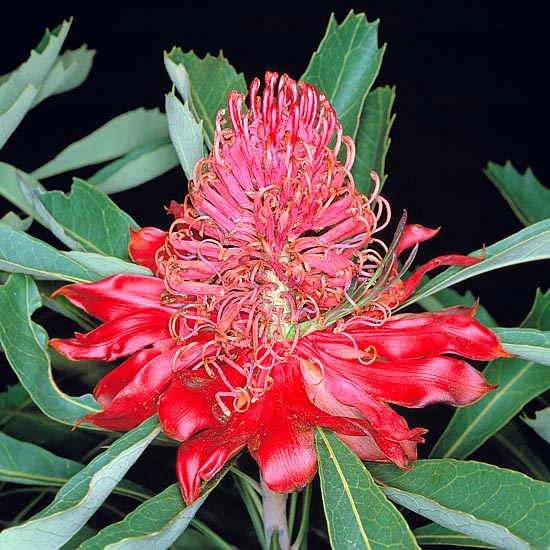 Rightly considered as one of the most ornamental and spectacular plants of Australia, but also of not easy cultivation, unless of satisfying its main exigencies, it may grow in the subtropical to temperate climate zones, in sheltered position, where it can resist to exceptional and short-lasting drops in temperature up to about -5 °C. It requires a position in full sun or slightly shaded, sheltered from the strong winds, and soils preferably sandy, acidic, perfectly draining and aerated, rather poor, in particular of phosphorus.

The waterings must be regular during the dry periods, but avoiding the water stagnations, without ever allowing the substratum to dry up completely, as the roots need constant humidity, for this purpose a good mulching is useful; the fertilizations, during the vegetative period, are to be done with slow releasing fertilizers and with low contents of phosphorus. The soil around the plant is not to be worked in order not to disturb the sensitive superficial rooting apparatus.

In heavy and poorly aerated soils it is easily subject to fungal attacks, in particular by Phytophthora cinnamomi.

The prunings, even if drastic, are useful after the flowering for a more tufted and compact habit and for an abundant blooming in the following season.

Cultivable also in pot, having particular care of the drainage and keeping in mind what already said for the plants in open field. Numerous varieties have been selected and hybrids created of different colours, even white, some of them being more adaptable to different conditions of cultivation than the species. The cut flower is long-lasting, 1-2 weeks, for its production with commercial purposes species and varieties are cultivated in Australia as well as in other countries having a suitable climate.

The Telopea speciosissima is the floral emblem of the state of New South Wales.

Telopea speciosissima was last modified: May 5th, 2018 by Giuseppe Mazza