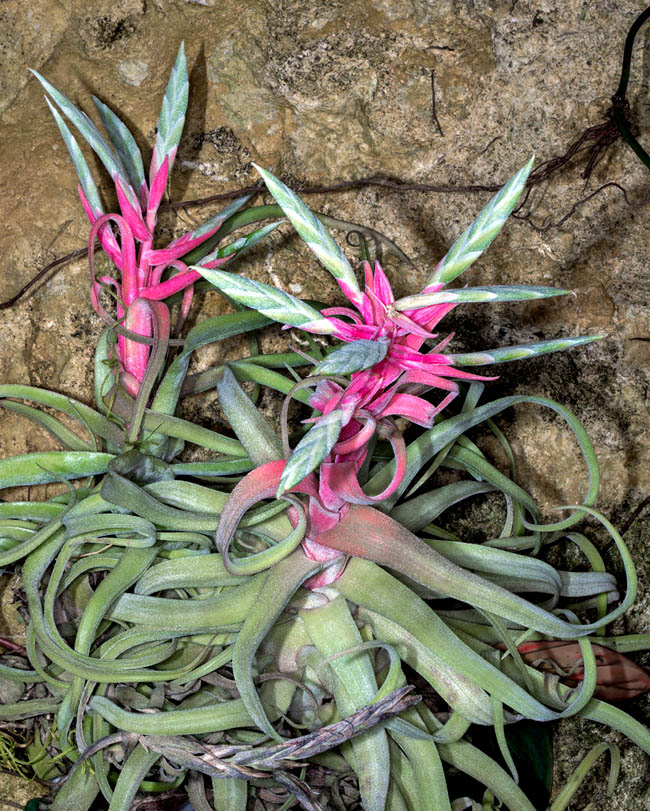 The species is native to Bahamas, Belize, Cayman, Costa Rica, Cuba, Guatemala, Honduras, Mexico (Baja California, Baja California Sur, Campeche, Chiapas Colima, Guerrero, Jalisco, México Distrito Federal, México State, Michoacán, Morelos, Nayarit, Oaxaca, Puebla, Quintana Roo, Sinaloa, Sonora, Tabasco, Tlaxcala, Veracruz and Yucatán) and Turks-Caicos where it lives on the trunks and the branches of the trees of the forests, evergreen as well as deciduous, from the sea level up to about 1200 m of altitude.

The genus is dedicated to the Swedish physician and botanist Elias Erici Til-Landz (1640-1693); the specific name is the combination of the Greek adjective “στρεπτός” (streptόs) = twisted, contorted and of the substantive “φύλλον” (phyllon) = leaf, with obvious reference.

The Tillandsia streptophylla Scheidw. (1836) is an evergreen, herbaceous species, monocarpic, epiphyte, acaulous, rather variable, with wide concave foliar bases, up to 10 cm long, with empty spaces between them, forming a large pseudobulb that hosts in nature colonies of ants (myrmecophily).

Numerous leaves arranged in a rosette, lanceolate, long pointed, retroflexed and spirally twisted that often it utilizes as tentacles for anchoring to the branches of the trees, up to 50 cm long and 5-6 cm broad towards the base, thick, of pale green colour and covered by a thick indument formed by white greyish scales (trichomes).

Floral scape at the centre of the rosette, robust, 10-18 cm long, surrounded by bracts with curved apex similar to the leaves that under the sun tend to pink.

Inflorescence, 15-25 cm long, formed by 8-14 spikes, subtended by lanceolate bracts similar to those of the scape, longer than the spikes at the base, shorter at the apex. Distichous spikes, 10-16 cm long, formed by imbricate bracts, 2-3 cm long and 1,2-1,6 cm broad, covered by the same indument as the leaves that turns pink when in the sun, that subtend the single flowers. Calyx with 3 free elliptic-lanceolate sepals, 2-2,5 cm long and 0,5 cm broad, tubular corolla, about 4 cm long, with 3 free linear petals of pale blue colour, 6 protruding stamens, arranged in two series of 3, about 4,5 cm long, superior ovary and about 6 cm long style. The flowers are hermaphrodite, but the position of the stigma over the anthers hinders the self-pollination (hercogamy), rendering necessary the crossed pollination, usually done by the hummingbirds.

The fruit is a capsule with acute apex, about 3,5 cm long, containing numerous thin seeds provided at the extremity of a tuft of hair that facilitate their dispersion through the wind. Once the flowering has finished the rosette stops growing and after a rather long time it withers, but the plant goes on living through the new plants that come to life at the base of the inflorescence.

It reproduces by seed, placed superficially on an organic substratum porous and draining maintained humid at the temperature of 24-26 °C, and by division of tillered plants. 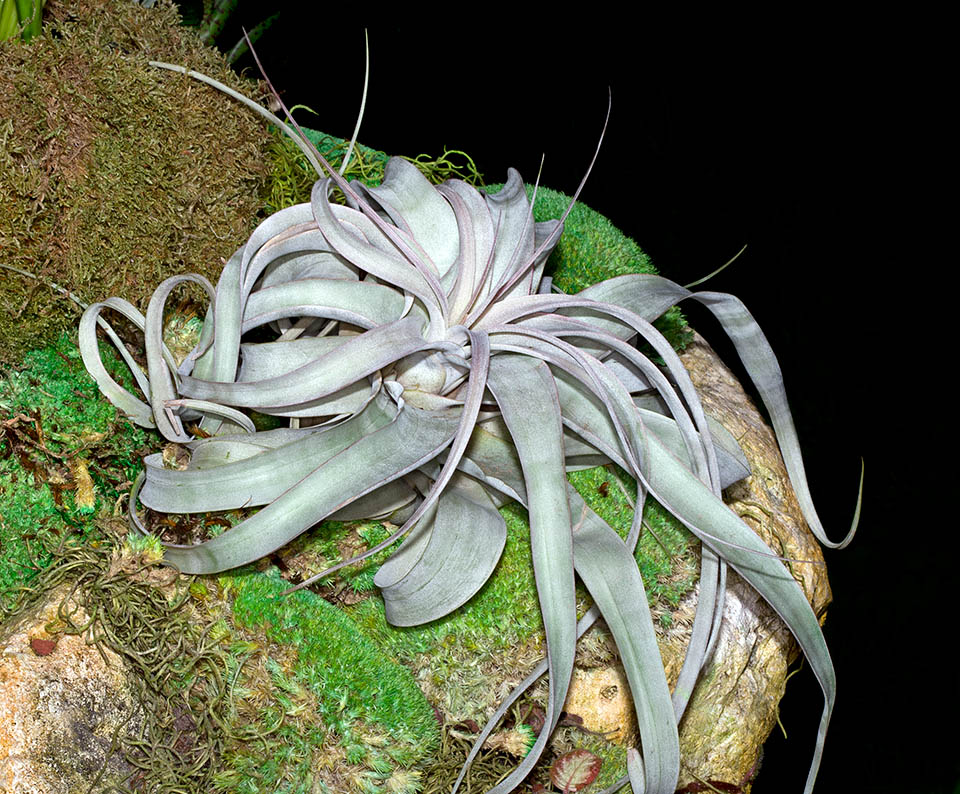 The wide concave foliar bases, up to 10 cm long, with empty spaces, form a big pseudobulb that hosts in nature colonies of ants © Giuseppe Mazza

One of the most sought species by the lovers, together with its hybrids and the numerous selected varieties, due to the long lasting inflorescences, its easy cultivation and especially for the particular forms it can assume depending on the water regime it is subjected. If well irrigated the leaves spread forming a wide rosette, as the humidity decreases they twist and curve around the bulbous base, up to hide it completely, assuming forms more and more compact and twisted.

Utilizable in open air in the tropical, subtropical and in the marginally temperate-warm ones, where it can stand, if perfectly dry, temperatures up to about -2 °C for a very short period. It requires high luminosity, also direct sun if gradually accustomed, moderate watering and humidity, if a twisted form is desired, and a well aerated position in way to allow the plant to quickly dry up. For the same reason it is prudent to place it horizontally or slightly downward, in order to avoid rottenness caused by stagnations of water between the leaves and, especially, inside the pseudo-bulb, position that usually assumes also on nature. It well adapts to the cultivation in particularly luminous inner spaces or in terraria fixed on pieces of bark, branches, rafts of cork or other inert material, with the same above mentioned modalities and averagely high temperatures with lowest winter night ones not under the 15 °C.