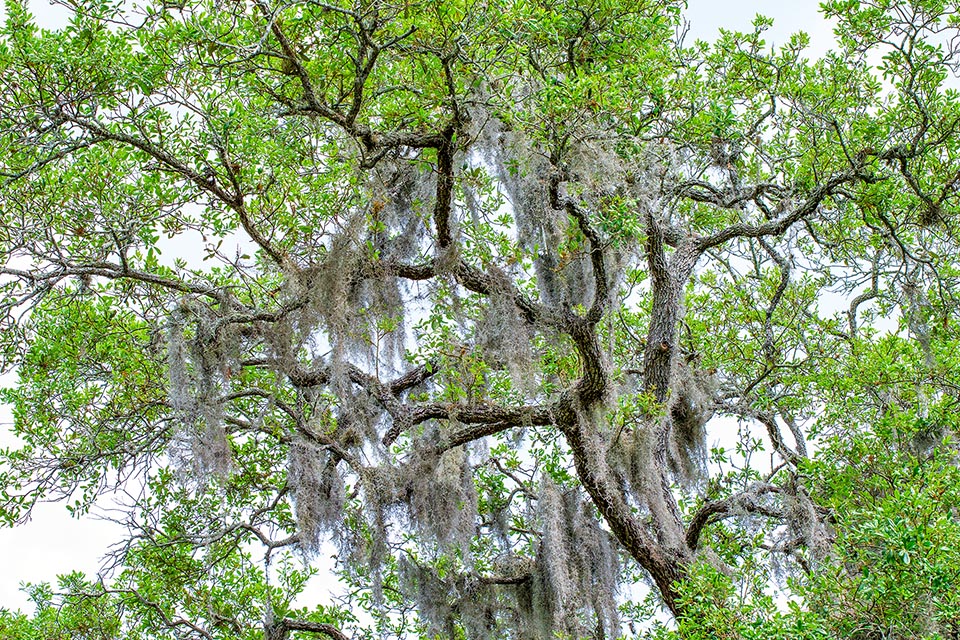 Quercus virginiana, in Florida, with Tillandsia usneoides tufts. It is not a moss and not even a parasite, but an epphyte © Giuseppe Mazza

Tillandsia usneoides (L.) L.  is a species included  in the Tillandsioideae, subfamily of the Bromeliaceae, native to the forests, mountains, and deserts of northern Mexico, south-eastern USA, Central America and the Caribbean up to a good part of Argentina. Its presence grants a characteristic aspect to the landscape with its long grey festoons, present not only on the trees of the virgin forest but also on the cultivated ones. In the past, it was thought that it could cause damage to the trees on which it lives, but evidence on this has shown that it is not a parasite species but only an epiphyte, in fact, its growth takes place also on decorticated branches of dead trees or on other inanimate substrata (telephone wires, fences, etc.).

The generic term was dedicated by Carlo Linnaeus to his Swedish teacher, Elias Erici Tillandz (1640-1693), botanist, professor of medicine and president of the Finnish Royal Academy of Turku.

The specific epithet usneoides is due to its resemblance to some species of the genus Usnea, counting fruticose lichens, like small bushes, of greenish grey colour, and that, they too, live on barks and on branches of trees.

It is a perennial herb, greyish, usually without roots, and with up to 8 m long stems, drooping for their positive response, filiform, ramified, with about 6 cm internodes. 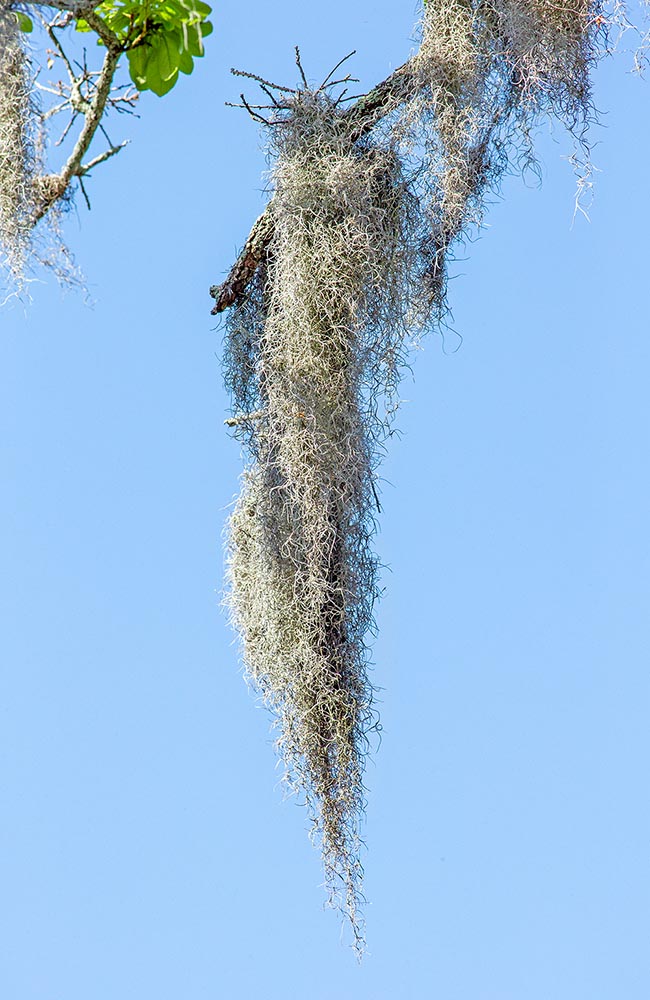 It is a Bromeliacea with drooping and ramified filiform stems, up to 8 m long, growing also on the telephone wires © Giuseppe Mazza

The plant grows zigzagging, but can be also linear, with a thick layer of very narrow leaves, linear, with basal sheaths, 2,5 to 8 cm long, of silvery colour that, in cross section, appear semicircular. A thick layer of peltate hairs (trichomes), like scales, gives the leaves a major capacity of absorbing and holding the water.

The inflorescences emerge from spring to autumn and each one is reduced to one only sessile flower with one shorter bract, ovate, pointed, also covered by hairs, with calyx formed by three sepals, 5-8 mm long, fused at the base, of oval shape and pointed at the apex.

Also the corolla is formed by three elements (petals), 8-14 mm long, of green-yellowish or blue colour. The stamens are six, covered by the petals, longer than the style that ends in three stigmas. The ovary is superior and trilocular. The flowers, fragrant at night, are pollinated by insects. It is also probable that the thrips holing the style at its base to lay their eggs, may serve for the crossed pollination.

The fruits are septicidal, 1,5-3 cm long, capsules remaining on the plant for about six months and when ripe release numerous seeds provided with a membranous extension shaped like a feather that allows the dispersal by wind (anemochory).

The propagation of this species occurs also in a vegetative way. In particular, the strong winds detach fragments of the lant and transfer them on others. Also birds contribute to its dispersion as they utilize parts of the plant for building their nests, and with subsequent abandonment, the parts stuck to the branches may grow and develop.

The source of water supply, as is the case for all epiphytes, is mainly given by the atmospheric precipitations, whilst it has been seen that the atmospheric humidity alone cannot support its growth because experimentally it has been noted that if the plants are left with the natural humidity only, without rain, they will die after 3-4 months.

The rain carries, dissolved, the mineral salts present in the air that are very useful to the plant for its metabolism. Equally advantageous, as a source of salts, is the percolation of the branches with the earthy material they have accumulated, in the form of powder, during the dry weather. T. usneoides is also able to collect powders thanks to the scaly surface and, in presence of water, these sediments furnish, they too, small quantities of salts.

Thanks to its characteristics, structural and metabolic (photosynthesis CAM and consequent saving of loss of water, due to transpiration during the day, capacity to catch the powder, etc.), T. usneoides is able to colonize with success extreme and difficult locations.

Specific studies have proven that T. usneoides can survive also in presence of metals that accumulate in its tissues and as during the last years the pollution of the air, due to pollutants, is a serious environmental problem, it has been found useful to employ this plant for the biomonitoring of the metals present in the atmosphere. It has been noted, in fact, that T. usneoides is a good atmospheric accumulator of Mercury, Cadmium, Cyanide, Lead, Nickel, Copper, Chromium, Carbon and Zinc and can neutralize them by biodegradation. 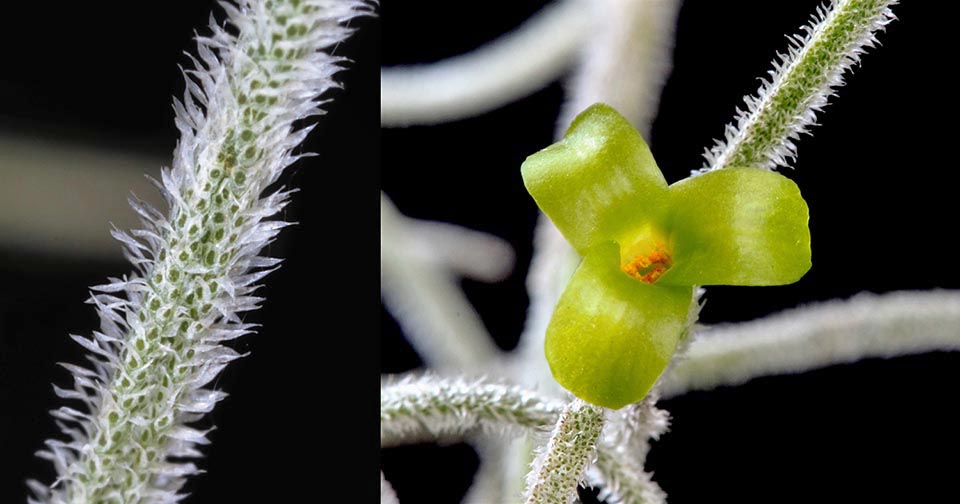 For living needs rain that absorbs greedily with a thick layer of peltate hairs, similar to scales, here very enlarged on the left. The water carries also, dissolved, the mineral salts present in the air, necessary to the metabolism of the plant, to which adds the powder trapped by the wind. On the right, the typical trimerous flower of Bromeliaceae © Luiz Filipe Varella

Furthermore, T. usneoides, thanks to its trichomic structure, can seize and remove from the atmosphere particulates PM2,5 and PM10. Because of all these characteristics, this plant is one of the most utilized in phytoremediation.

T. usneoides has been used since a very long time by several American natives tribes for various uses. As a matter of fact, have been discovered 3000 years old fire-tempered clay potteries having traces of burnt fibres of this plant.

The Houma and Seminole tribes utilized the decorticated fibres to make mattresses, mats, and, twisted, roped to tie together the poles of the wooden dwellings. The fibres, dried, were utilized by the North American populations for the fire arrows that for centuries have been indispensable tools for hunting and for the war.

In the Natchez tribe of Louisiana, the plant was used, after boiling, as a medicine to prepare a tea used to lower the fever.

Nowadays, from an economic point of view, the species has a certain commercial value. It is utilized as ornamental plant in the floral compositions and in the decorations for crafts. Its mechanical tissue, decorticated, gives a very resistant elastic fibre, often used in lieu of the horsehair, in upholstery and in mattresses padding. 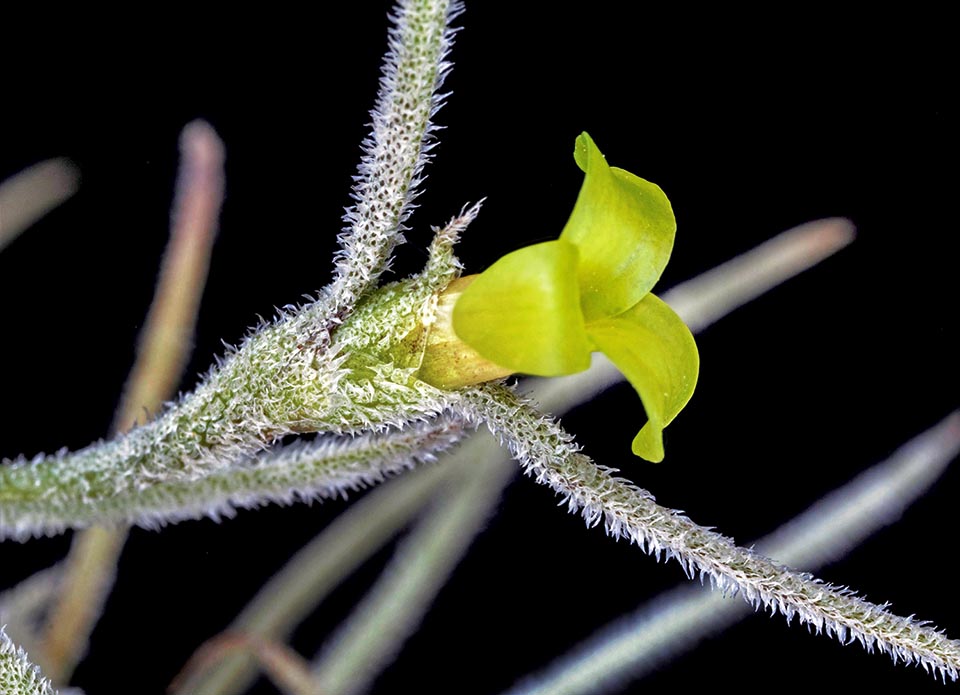 The tiny flowers, fragrant at night, are pollinated by insects. Known since old times for the medicinal virtues, Tillandsia usneoides is now used to measure the atmospheric heavy metals pollution, that is then able to neutralize. To save water it uses the photosynthesis CAM, typical to crassulacean and other desert species, opening the stomas only in the night, when the evaporation is lower. It hosts a rich biodiversity: insects, ticks, mites, millipedes, spiders, snakes, bats, and a green alga © Luiz Filipe Varella

In Mexico the plant is utilized with ornamental purpose in the religious holidays, especially in the cribs and in other Christmas decorations, but also with medicinal purposes as anticonvulsant and as astringent. In some US territories, occasionally, is fed to animals as fodder.

T. usneoides is a plant easy to cultivate as it does not need soil, requires only heath, humidity and water, in the cold climates it requires a winter shelter.

Finally, it is worth mentioning that T. usneoides also hosts ticks, mites, millipedes, spiders, rat snakes and even bats. On its green scales we find also a green alga of the genus Chlorococcum.