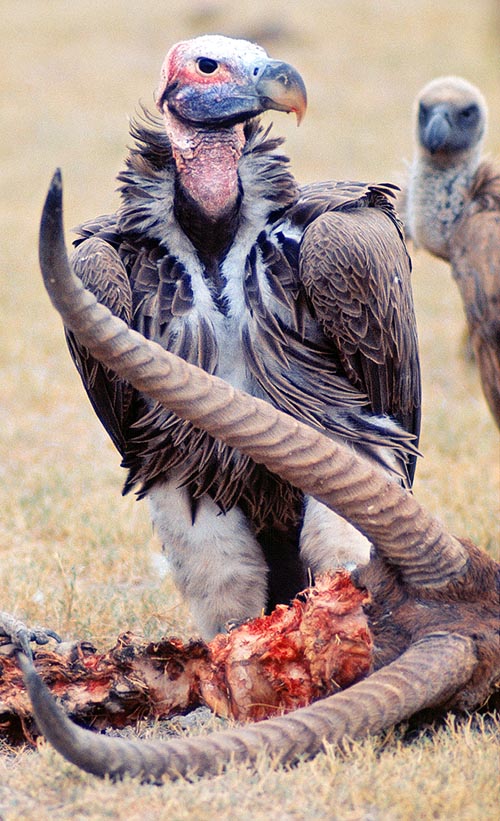 When there is a carcass to strip off the Torgos tracheliotus, seen the size, has absolute priority and the Gyps africanus, on the right, must wait for its turn © Giuseppe Mazza

It is also called Nubian vulture because it was thought to be native to Egypt and to the Nile Valley.

It is a very large vulture and can be considered among the biggest Old World necrophages along with the well known Bearded vulture (Gypaetus barbatus), that exceeds it only in the wingspan, the Cape griffon (Gyps coprotheres) and the Cinereous vulture (Aegypius monachus) that at times exceed it in weight.

It is easy to distinguish when flying due to the size and also due to the extremely heavy gait when starting off but it is on the ground with other vultures that it shows in the reality the differences of its structure.

It is also very aggressive and there is no other opponent when it gets on the carcass, where it has absolute priority on all, also on the jackals who fear and respect it.

Strangely aggressive it is never anxious in getting access to the banquet even if the other vultures seem to willingly give way, not so much for the respect of the size, but because it’s the only one capable to shear the leathery skin of the carcasses in order to reach the soft parts of the carrion.

Its enormous beak is one of the most suitable tools for this operation, as it incredibly able to cut like scissors entire chunks of skin and even the tendons of the victim.

The lapper-faced vulture loves to nourish of the hard parts of the carcass, especially parts of skin, nerves and cartilage rather than of rotting flesh and often waits for the others to eat innards and soft parts in order to have an easier access to such delicacies.

Its vulgar name, as well as the scientific one, comes from the particular red or pinkish fleshy appendages it has on the face that resemble fake ears.

The etymology of the scientific name comes from the Greek “torgos”=vulture and from “trakhelia =cartilage, outgrowth and “ous-otus”=ears.

Also the names given in Europe are modelled on this feature. In English Lappet-face vulture or Arabian vultur; in French Vautour oricou or d’Arabie; in Spanish Buitre orejudo; in German Ohrengeier and in Japanese the ingenius Mimihidahagewashi.

Taxonomically, this vulture is the only species assigned to the genus Torgos even if previously it was paired with the Red-headed vulture (Sarcogyps calvus). 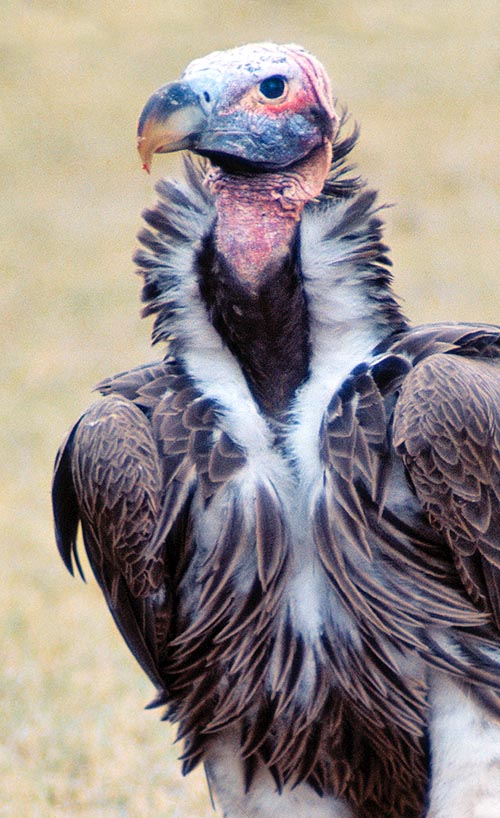 It loves to eat the carcass hard parts, leaving the others the rotting flesh. Strong of its huge beak it can cut like scissors skin, cartilage and tendons © Giuseppe Mazza

The lappet-face vulture has a vast range but is quite rarefied everywhere.

It is found in all sub-Saharan Africa with exception of some strains in southern Egypt and in Mauritania, but it is quite rare on the central Atlantic side in particular in areas covered by forests. It is nowadays extinct all over North Africa.

It can also be met in Middle East with a specific subspecies (Torgos tracheliotus negevensis) that occupies the Israeli Negev desert and the southern part of the Arabian peninsula.

The African subspecies is, on the contrary, the Torgos tracheliotus tracheliotus of a colour tendentially darker than the Asian one.

Nourishing of carcasses, often of animals killed by poisonings, it accumulates in the body quantities of pesticides such to render them initially sterile in the reproduction and to lead them later on to death by poisoning.

Also the human disturbance of the nidification sites has caused their abandonment and the final leaving of the occupied area.

Not last, the strong reduction if not even the abandonment of the cattle breeding in the Sahel during the last decades, caused by the worsened weather conditions and partially replaced by sheep farms, has caused a drastic reduction of big carcasses and consequently the departure of this raptor from these areas.

It is estimated that the total number amounts to about 9.000 specimens in the whole range.

It lives in savannahs and arid plains with thorny bushes and dry rivers surrounded by acacias and step and rocky banks.

It loves open and pre-desertic areas with few trees, little herbaceous vegetation and preferably uninhabited and well distant from any conurbation.

Only when looking for carcasses it may fly over any type of environment and also outskirts of urban centres where often follows the road routes looking for possible traffic fatalities.

Usually lives in the plains but may reach and exceed, in the Ethiopian highlands, the 4.000 m of altitude. It is a solitary bird and only rarely is found in small groups in proximity to big carcasses of animals. It is in strong decrease in all its range with real and proper extinction in various historically inhabited areas. 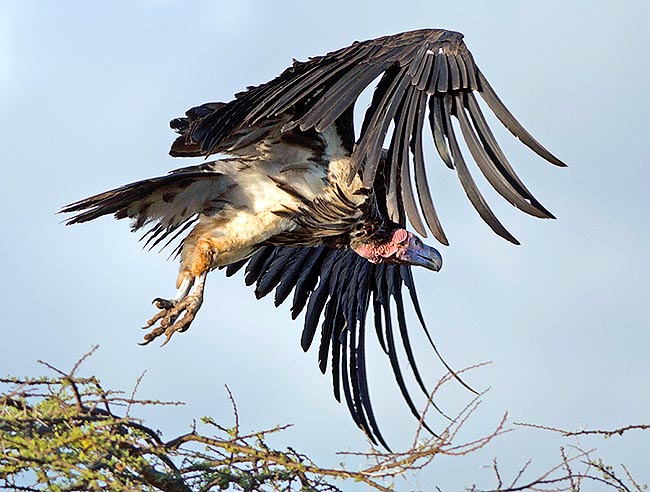 With 8 kg of weight, despite its 250 cm of wingspan, has a heavy departure. The sight is exceptional, better than the other vultures. When in zone is the first to go down. Attacks also live animals in difficulty © Gianfranco Colombo

With a wingspan of 250 cm, a weight of about 8 kg and a length of more than 110 cm, this vulture has few competitors among its similars.

Also this bird, like many necrophages, has a bare head to avoid to get the feathers dirty with the organic liquids coming out from the carrion while eating it. The head may be of bright red to pale pink colour depending on the area of belonging. Usually, the red is stronger on the subjects living in the south of the African continent whilst it gets paler gradually while going northwards of its range.

The young are much darker and the bare part of the head does not show any colour. The lappet-faced vulture is wholly blackish with a contasting white chest with large black streaks caused by the long feathers hanging from the throat. Also the underwing is black with two candid and well distinct white stripes, along the upper edge of the wings.

Though belonging to the category of the savannah scavengers, this necrophage shows its innate aggressiveness attacking often small animals, wounded or in poor health conditions, plundering nests of weaker birds carrying out raids in the colonies of flamingoes and at the same time does not disdain to eat big insects and small rodents. It does not have an acute sense of smell like some of its similars, but is provided of a surely more powerful eyesight and often is the first to find the carcass and to lead to destination the various groups of vultures that fly together over the savannah. While feeding it may gobble up to one kg and a half of food without any problem. 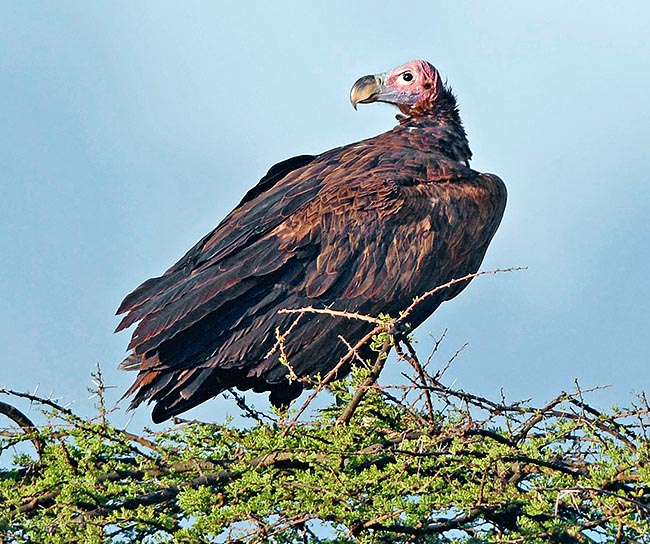 The eyrie, a mass of dry branches and brushwood 70 cm tall and even 2 m wide, is placed on the acacias high branches. The eggs are hatched for 6-8 weeks by both parents and the kids abandon it after 4 months after the birth. It is an increasingly endangered species by the human activities that counts only 9.000 individuals © Colombo

The lappet-faced vulture is a solitary animal and does not nidify in colonies like other consimilars, and when this casually happens, the eyries are always placed well far from each other.

Only while feeding there may form small groups even numerous but that return to loneliness as soon as the meal is finished.

This vulture may reproduce only after the fifth year, during which, besides reaching the full maturity, learns all the necessary techniques for surviving in a such a hostile environment.

The eyrie is usually placed on a big tree, particularly an acacia, where it gathers a huge quantity of material, usually dried branches and brushwood, so much to create a more than two meters wide and even 70 cm high platform.

At times it builds more nests using them in rotation during the following years.

It usually lays two eggs that are hatched by both parents for a period of 7-8 weeks.

The permanence of the young in the eyrie is somewhat long and may exceed the four months before flying away, even if the total independence of the young may take place even when one year old. Just for this reason the nidification of the lappet-faced vulture often does not follow well precise annual rules.